Ever wonder why cold air has its pristine scent? Odor molecules slow down, lumbering like bears in the cold. In the Arctic, as the air sweeps across miles of desert ice, it's unforgettable. My first lungful was 30 years ago, working Alaska's Prudhoe Bay oilfields, a tug crew of six. For a survival drill we swam among the calving bergs, bright orange survival suits dancing like bobbers atop blue and brilliant waters.

Next week, President Obama will visit the Arctic's pristine shores. He asks that we, the American people, join him. And we should. But like any good crew mate, we should point out holes in the president's survival gear, lend him a helping hand. No member of the crew is too small to make a difference when survival is at stake.

I learned this anew recently under a broader survival imperative, as a "kayaktivist." I, too, ask the president to join this journey. His Secret Service detail might be difficult to accommodate in kayaks (we've seen their missteps on the White House lawn). But friendly jest and paddles aside, the president need only pick up a pen.

As a good crew mate, I want the president to see the hole in his "survival suit" -- and our own. That his climate change legacy, the president's concern for a warming and imperiled planet -- especially the belief that we can do something about it -- are inconsistent with Arctic drilling.

It's up to us, the American people, to help steer him toward this destination.

Yet glancing astern, suddenly I see an Imam in my kayak -- but not the President of the United States. How could this happen, this astonishing moment? 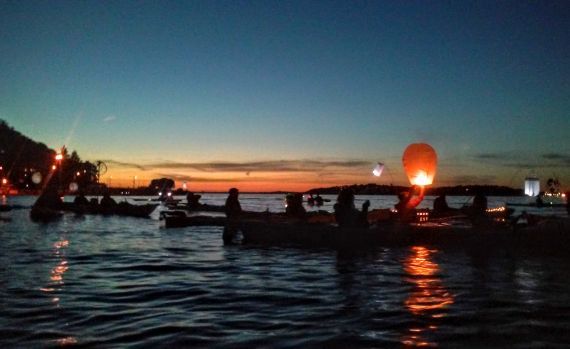 On August 18, the Islamic Declaration on Climate Change urged Muslims "not to strut arrogantly on the Earth," that our species has been "selected to be a caretaker or steward (khalifah)."

Marilyn Sewell, a Unitarian minister, took that stewardship seriously in, "Civic Disobedience and Climate Change." Look closely: Her title may have slipped one past its readers. Try a Google search for "civic disobedience." You won't find it. Instead, the search engine brings back "civil disobedience" -- the more common nomenclature for what kayaktivists, bridge danglers, and climate oped writers are doing. What does it mean, this subtle shift of a consonant?

"Civic" imparts duty -- and Arctic survival depends on it. In the Oxford Dictionary: "Of or relating to the duties... of a people in relation to their town, city, or local area." From that local responsibility, Sewell sweeps an arc from Socrates to Ghandi to Martin Luther King, enlarging into a moral imperative. For Sewell, our duty to the planet is of Biblical proportion: "these tiny kayaks... are the David to the Goliath of the fossil fuel industry... The future of the earth is in our hands."

That consonant packs a punch. Few movements are existential in nature. This one is.

Patrick Hiller, PhD adjunct at Portland State University, mapped out a new heading in, "How Activists Determine the Course." Hiller saw kayaktivists not as a blockade (of a river, the Fennica, the Polar Pioneer), but as channel openers: "Public activists campaigns... open media, social, and political space for climate protection." Icebreakers, in their own right: holding open the public imagination so that policy makers can act. Studying the lives of nonviolent activists, Hiller found "very ordinary people whose extraordinary actions contribute to positive change based on a vision of a better future for everyone."

That sounds quite like how President Obama envisions the American people. This vision, the ordinary in service to the extraordinary, is thriving in Puget Sound waters. Bill Moyer launched kayaktism from the shores of Vashon Island: "Join the Flotilla, Love wins."

Let's hope it does. Three decades since I worked in the Arctic, my career today looks quite different. Not ice, but the fire service where I now face a different kind of air -- dark, toxic, filled with poisons. I cannot escape the juxtaposition, as fossil fuels foul the air and warm the planet.

Neither can you. There is no plan B, no Planet B. Just ask President Obama.

Mitzi Simmons is a firefighter, kayaktivist, and writer in Seattle. She formerly worked as a deckhand in the Prudhoe Bay oilfields for Crowley Maritime Corporation.