The lyrics to many choral refrains in Gilbert and Sullivan's operettas are often ignored or forgotten by audiences who favor the musical solos and patter songs written for the lead performers. But William S. Gilbert's lyrics serve very specific purposes. In H.M.S. Pinafore (1878), the female chorus frequently describes its link to Sir Joseph Porter with a variation on the following refrain:

In The Pirates of Penzance (1879), Gilbert uses the chorus to strengthen a particular plot point. As lusty pirates, the men sing:

"Here's a first-rate opportunity
To get married with impunity
And indulge in the felicity
Of unbounded domesticity.
You shall quickly be parsonified,
Conjugally matrimonified,
By a doctor of divinity,
Who resides in this vicinity."

"We have missed our opportunity
Of escaping with impunity;
So farewell to the felicity
Of our maiden domesticity!
We shall quickly be parsonified,
Conjugally matrimonified,
By a doctor of divinity,
Who resides in this vicinity."

Buried in the extended finale for The Mikado (1885), are some words of wisdom for niche grocers as well as those who have rather unceremoniously been humped and dumped by their lovers.

As part of the 2014 San Francisco Jewish Film Festival, Bay area audiences were given a chance to watch Julie Cohen's delicious documentary entitled The Sturgeon Queens. Using a gimmick that would seem downright cheesy in any other film, Cohen gathers together a group of long-time customers of Russ & Daughters Appetizing Store around a table (with food catered by Russ & Daughters) and has them read her script as if they were participating in the reading of the Haggadah at a Passover seder.

The moral of the story? When you've got fresh pickled herring on the table, who needs Morgan Freeman's voice to lend gravitas to your project? With Russ & Daughters celebrating 100 years in business in 2014, Cohen's documentary relies on folksy testimonials from loyal customers of the popular fourth-generation family business on Manhattan's Lower East Side to tell its history.

Much of the family's history is provided by two of Joel Russ's daughters: 100-year-old Hattie Russ Gold and her 92-year-old sister, Anne Russ Federman. Their father was an Austro-Hungarian immigrant who began selling herring from a pushcart shortly after he passed through Ellis Island and stepped foot in Manhattan.

With salmon and herring plentiful (and freshly-smoked), the Russ business soon blossomed. From the comfort of their home in Florida, Hattie and Anne reminisce about what it was like to work in a fish store that had no heat during the winter and no air conditioning in the summer. While some of the store's customers tried to set up a match between one of the Russ daughters and their sons, one young man preferred the direct approach. "Does your mother make gefilte fish with sugar?" he asked. "How'd you guess?" Anne replied. "I'll be over Friday night," he stated.

A man who often placed the needs of his business above the needs of his family, Joel Russ was no fool. Having failed to produce a son, he came to realize that the intelligence and beauty of his daughters were rapidly becoming assets to his business. As a result, he didn't hesitate to make them owners and managers of the family business (Anne developed a formidable sales technique of teasing customers by saying that a particular fish was so beautiful, that she didn't know if she could bear to part with it).

Joel Russ also took the bold step of encouraging one of his Dominican workers to learn the fine art of slicing lox. Not only did Herman Vargas learn how to speak Yiddish by listening to Russ's clientele, once the regulars overcame their reluctance to deal with someone who wasn't even Jewish, they started referring to him as "Boychick, the artistic slicer."

The Russ family nearly lost their business during the Depression and again in the 1970s, when the Lower East Side was overrun with prostitutes, drug dealers, vandals, and graffiti artists. But Russ & Daughters (which is still situated on the corner of Houston and Orchard Streets) survived. When Anne's son Mark left his career as a trial attorney to help save the family business, he learned the fine art of haggling with fish vendors at the Fulton Market.

"It was more like a street brawl than a commercial transaction. One family would reject a piece of fish and say that it was awful. 'What you mean it's awful? You don't even know a good piece of fish!' would be the response. Then cursing (in Yiddish) would start."

The irony of the great success of Russ & Daughters, which will soon open a second location (for sit-down eating), is that its success is built on a fish stock that was once considered as a food staple for poor immigrants but has now become a pricey delicacy. Whether one lusts for lox, black caviar, pickled herring, or whitefish salad, the celebrity of Russ & Daughters has less to do with popular Jewish entertainers like Molly Picon, Zero Mostel (or chefs like Mario Batali) who have been loyal customers than with the actual quality of the store's food. In the following clip, filmmaker Julie Cohen explains what an appetizing store is as well as its particular place in New York's Jewish cuisine.

Much of the musical score for The Sturgeon Queens is based in Klezmer and music from the Yiddish Theatre (at one point Anne sings a popular Yiddish song she learned as a child). A painting of a winged herring by Marc Chagall frequently appears during transitions between film segments. Here's the trailer:

Over the years I've seen numerous productions (and many more performances) of Giacomo Puccini's reliable tearjerker, Madama Butterfly. Although I usually avoid questions about which opera is my favorite, Butterfly is, without doubt, within the top 10.

The problem with loving something (or someone) so contentedly is that, after a while, one's time with them can seem to be spent on automatic pilot. Whether in bed or at the dinner table, familiarity does not breed contempt so much as routine. My mother once commented about a friend who had retired to Florida by stating that "After 25 years, you pretty much know everything they have to say." 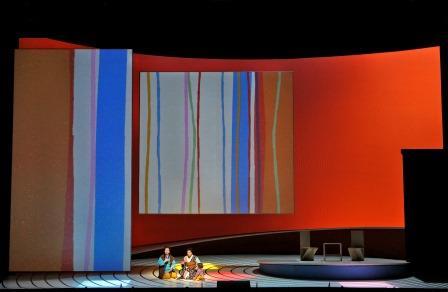 Sometimes, however, a thrilling surprise can catch you off guard. In 2012, when the San Francisco Opera presented a new production of The Magic Flute that had been designed by Jun Kaneko, his ability to use computer-generated imaging software as a tool for playing with light and color proved to be a breathtaking treat. Kaneko had already impressed audiences at Opera Omaha with his 2007 production of Madama Butterfly and at the Opera Company of Philadelphia with his 2008 production of Beethoven's Fidelio.

When I learned that David Gockley had decided to bring Kaneko's nontraditional production of Madama Butterfly to the San Francisco Opera, I was eager to see what this talented artist might do for the work. That he could make me feel like I was discovering Puccini's opera anew is testament to the power of his art.

During the overture, the audience is greeted by a huge museum-like display of kimonos hanging from above like semaphore flags. Gone are the standard three-dimensional sets which include a Japanese house, the surrounding trees, and the footbridge that Cio-Cio-San and her entourage must cross in order to reach the spot where her wedding will take place. Gone are Pinkerton's military uniforms, which have been replaced by a rather jazzy set of outfits. 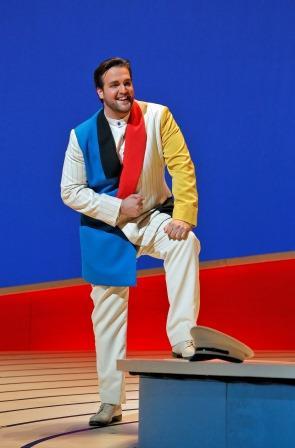 There are times when Kaneko's unit set resembles some of the productions that were designed and directed by Wieland Wagner decades ago. But, oh, what dramatic miracles Kaneko achieves with CGI animation.

Case in point: Many companies (including the San Francisco Opera) now perform Madama Butterfly in two acts instead of three. The orchestral interlude between the moment when Cio-Cio-San sets up her night watch to await Pinkerton's arrival and the early morning moments when the sound of birds signals dawn breaking over Nagasaki's harbor have always presented a challenge for audiences. While I cannot explain the exact mechanics of how Kaneko filled this interlude with simple displays of color patterns projected onto three large screens, its dramatic effect was both refreshing and remarkable (as was his depiction of Pinkerton's ship, the S.S. Abraham Lincoln). 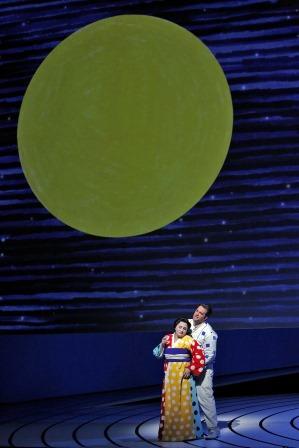 Because Butterfly is performed so frequently, many people forget that the title role offers a tough night of singing for the soprano. I've been fortunate enough to have experienced quite a few sopranos in the title role over the years (from Francesca Roberti, Leona Mitchell, and Diana Soviero to Teresa Stratas, Renata Scotto and Yoko Watanabe). It's fair to say that Patricia Racette's powerfully sung Cio-Cio-San proved to be a deeply personal and touching portrayal of Puccini's unfortunate teenage bride.

Racette was in good company, with Brian Jagde providing a full-throated, tall and handsome Pinkerton and Brian Mulligan contributing a sympathetic portrayal of the American consul, Sharpless. What really took me by surprise in this production was how much stronger the contributions of certain supporting characters became under Leslie Swackhamer's compelling stage direction. Julius Ahn was a spectacularly effective Goro with Efrain Solis as a solidly-sung Prince Yamadori (it's interesting to note that Racette, Jagde, and Solis have all participated in the Merola Opera Program). 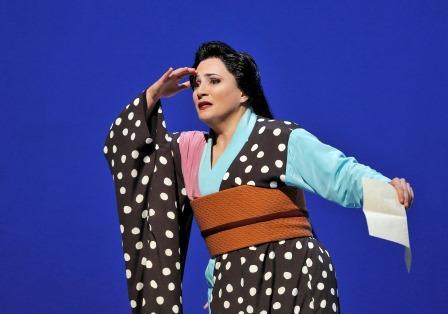 In roles that are often taken for granted, Morris Robinson delivered a memorable Bonze while Elizabeth Deshong sang one of the strongest performances of Suzuki I think I've ever heard. Music director Nicola Luisotti kept things moving at a brisk pace throughout the evening

Many opera fans decide whether to attend a live performance of Madama Butterfly strictly on the basis of who is singing the title role. However, aided by Gary Marder's exquisite lighting, Kaneko's sets and costumes proved to have a revelatory effect on Puccini's opera. I can only hope that this production has been captured for future release on DVD by the San Francisco Opera. Here's some footage from the production.