GENEVA -- Scientists from CERN, The European Organization for Nuclear Research, in a build-up to what promises to be the biggest story since Anderson Cooper shattered the hopes of the remaining half-dozen Catholic school girls in America who didn't already know, have announced that they have something to say, but it'll have to wait until Wednesday.

Ain't that a b%&ch?! If you've got something to tell us, tell us. You're the smartest dudes in the world. We need what you impart. We crave it. It's the staff of our modest, vulgar, shuttered lives. Don't mete your knowledge out in dribs and drabs with teases beforehand. Reveal the truth already!

Such is their way, the seers of truths universal. What we know so far is this: The CERN gang have, it seems, found evidence from their testing at the Large Hadron Collider, a 17-mile circular, subterranean tunnel some 500 feet or so beneath the Franco-Swiss border (right near the fires of Orc), of a notoriously elusive little bit of quarky goodness known as the Higgs boson. What they found reportedly comports well with results from similar testing at Fermilab's comparably meager little 4-mile Tevatron accelerator in Batavia, Ill., and that's good news for particle hunters on both sides of the Atlantic.

Named for English physicist Peter Higgs, whose work in standard model physics in the 1960s predicted its existence, the Higgs boson was dubbed by researchers long ago the "goddamn" particle, marking the difficulty one has in actually finding the pesky bugger despite the fact that it should be there.

Somewhere along the line, a publicist, a blogger or some other brand of simpleton shortened the Higgs' ignominious moniker to "the God particle" and thus we await an announcement from a team of men heading up the most expensive research facility in history that they have discovered something the lay press will report as so significant it outranks finding Isaac Asimov's head in a crystal box buried four thousand years ago by an unknown race at Machu Pichu. You might actually find some people who'd believe that latter bit.

Unless Lindsay Lohan gets busted smuggling dope in her bra or a fireworks mishap sparks a conflagration from which Newark is saved by a clap of Cory Booker's mighty hands, on Wednesday you'll be hearing all about the Higgs boson. That's because other than particle physicists, the one group of people who really seem to give a good god-damn about the goddamn particle are editors on a slow news day. After Wednesday you can return to your unenlightened life of scrounging the mean streets for crusts of bread, eking out a base existence in the bowels of manswarm, just like all the rest of us without a 17-mile-long magnet fort. Ours not to reason why; ours but to toil and die. The work of particle physics is not for the ordinary rung of man.

But if you're an ordinary sort and you can't wait until Wednesday for the illuminati to tell you what they've already sort of told us, here's how it will go. First, someone in an ill-fitting houndstooth blazer will thank other people in ill-fitting houndstooth blazers and most of them will have really bad haircuts. Some will have unpronounceable surnames and one will bear a passing resemblance to Jodie Foster. Then, the Grand Ill-Fitting Houndstooth Blazer Poobah will tell us, essentially, "Our data strongly point toward the existence of the Higgs boson."

No, I have no special access to CERN insiders. I just read what Fermilab's Rob Roser said in a press release on Monday. Thunder stealers. CERN's got something to announce and the outspent Fermilab brats have to go and chime in. "Yeah, they probably found something, but we, like, told them where to look. We're smart too." I imagine an international physics symposium must be rather like Lord of the Flies, only very clean and with laptops and accents.

Here's something no one in a white coat will say outright, "Of course we didn't really find anything." But they didn't. They can't. Not according to the very rules of their own game. The Higgs boson and all other subatomic particles are too small to be detected directly. What one finds in a particle hunt is evidence. One finds a trail, a trail left behind in the microseconds of a particle's death throes after it is spun out of a somewhat larger particle that collides at incredibly high speeds with yet other particles under circumstances that can only occur in supercolliders, rare cosmic events and Martha Stewart's compound. What researchers have found is, presumably, satisfactorily irrefutable evidence of the activity of a particle with 125 GeV (billion electron volts) of energy, a value in the mid-range of the Higgs' postulated energy of between 115 and 135 GeV.

That's boring, I know. They won't say it until Wednesday, but it's so, boring or not. And then reporters will ask questions and geniuses will answer them as if they're a panel of 15th-century cardinals explaining the concept of divinity to a group of half-naked Indians. "Well, yes, it has been called the God particle and in a sense you could say we've found it... " No you did not and don't pander to us only to further our dumbing down. Is it not enough that we must pass our meaningless days in fingerless knit gloves scaling fish at filthy markets, fashioning hoops for rough barrels and pressing our betters for alms? Don't make us stupider than we are.

The Standard Model of particle physics is, as its name implies, a model. It's a way of understanding something. It is not the thing itself. The Standard Model is less a description and more a representation. Its usefulness lies in its power to render comprehensible the inconceivable. The actual processes of the universe at very small levels (and very large ones) surpass our capacity to grasp. The Standard Model and other scientific models therefore give us a way of making sense of it all given the limitations of our faculties. Such models represent the phenomena they explain and by "represent," I mean in the etymological sense of the word: "to make present." Models make things present in a way impossible for those things in itself. Atoms are not actually little hard balls with N's and P's in the middle surrounded by cloudy shells of E's. That's a useful way for us to understand them, but it's not what they are. The same is true for most of the phenomena represented by particle physics. 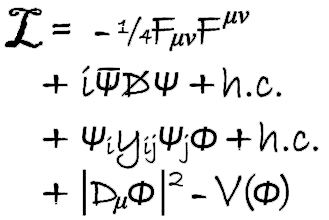 I have used models as explanatory tools, mostly when I was raising a young child. I once told my daughter in response to her asking me why a mother duck was directing her ducklings one way rather than another, "Well the mommy duck is teaching the babies so that they can learn how to take care of themselves when they're grown up," which is metaphorically true, I suppose, although if I were being precise about what I really think I'd have said, "Because she's following a deeply ingrained genetic code that determines her nurturing behavior and has been selected over hundreds of millennia through a process of adaptation... " and all that. I don't really think mommy ducks have some abstract notion of the future and their children's competitiveness therein. It's not like their web-footed Yodas with clutches of little ducky savants. Still, for the sake of giving a child a good notion of what was going on, my speaking metaphorically and employing a model within her understanding, it all served its purpose. My kid is now 22 and as far as I know she's nice to ducks.

I'm pretty clear to myself, at least, when I'm speaking metaphorically. I know that what I'm using to describe a phenomenon is an inventory of terms that don't accurately reproduce the real phenomenon in question. I bet the same is true for particle physicists. Insofar as one of their model's most basic maxims is that mass is energy, energy behaving in a particular way, I bet they don't really believe that there is a corporeal globule of mass-giving stuff with an H on its sweatshirt anywhere in the subatomic realm or any other. They no doubt believe they have "found" that under certain extreme conditions they can create energetic collisions that generate predictable, measurable outcomes and from those they deduce the soundness of their model and its usefulness in predicting and explaining the operation of a dizzying universe in which energy at extremely small levels behaves in very strange but nevertheless predictable ways.

Up to that point, I'm behind them, but when they start presenting their findings to the rest of us they sometimes find themselves on shakier ground. Talk about things like "the God particle" and what-have-you gets them very near the edge of reification. That's a word philosophers and scientists use to mean a fallacy of ambiguity -- taking a thing to be real because one has a name for it. I can use the word "unicorn" but I can't enter one in the Breeder's Cup. Belief to the contrary would be a case of reifying a term.

Another such case would be inferring from the fact that our deepest probing of subatomic behavior, which is unobservable in principle, can be accurately described by positing the ontological reality of our model constructs, and I'm sure no credible scientist in the world would be guilty of such a fallacy. The rest of us can be as fallacious in our thinking as we want, given that ours are drab, crude leases on brief mortality characterized chiefly by our satisfaction in childish pastimes, our pursuit of vice and our contentment with simplicity. We can accept fallacies. Scientists can't.

And surely none of them will put forth a fallacy as fact, although I guess we'll have to wait until Wednesday to find that out for sure.

[Personal note: I am grateful and indebted to CERN's Steven Goldfarb, whose thoughtful and patient comments on an earlier opinion I expressed on this matter have led me to consider it all more deeply and, satire notwithstanding, more credibly. I wish Goldfarb and his colleagues at CERN and Fermilab continued success and I thank them for their contributions to our era's body of remarkable scientific achievements.]