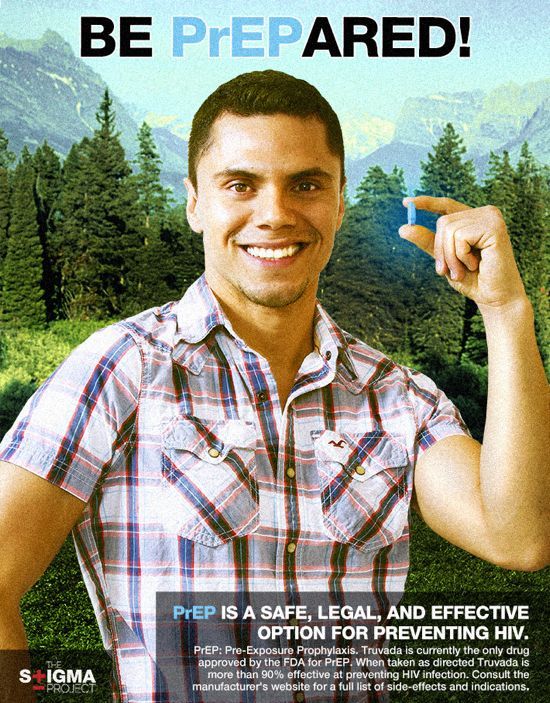 For over 30 years gay men have struggled around issues of shame, risk, pleasure, safety, death and life. HIV is an integral part of our daily lives, and we've learned what the risks are and how to protect ourselves. Until recently there were two ways to prevent HIV: abstinence and condoms. Now we have a new option in pre-exposure prophylaxis (PrEP). PrEP is a safe, legal and effective option for preventing HIV, and no one should be ashamed of choosing it.

The Stigma Project has taken the proactive step of creating an anti-stigma campaign in regard to PrEP. The groundbreaking campaign is pictured above. Unfortunately stigma is already being used to scare and confuse people about the option of PrEP. And stigma doesn't just devastate our community; it can claim people's lives.

The science on PrEP is sound. If an individual takes Truvada every day, as instructed, they will reduce their chances of infection by more than 90 percent. So we have a new tool that is safe and legal and can prevent HIV. Why are we arguing about it?

PrEP provides our community with a great opportunity for self-reflection. Are we still the community that believes that health care is a right and that everyone should have access to medical care regardless of circumstance? Are we the type of community that values privacy and respects the personal medical choices of the individual? Are we committed to sexual health and self-determination? Are we committed to ending the epidemic by pursuing all options to reduce infections?

I believe we are. However, the vitriolic tone of the PrEP debate has given me pause.

We all share the same goal of reducing infections, but you have to ask yourself if you are truly committed to combatting stigma. If you aren't, if you want to wield stigma as a weapon to impose your point of view, then you are part of the problem. To stigmatize PrEP or the people who take it will only lead to more infections.

To some, PrEP seems to signal complete and total sexual chaos, just like another pill that came onto the scene in the middle of the last century. People opposed the birth control pill because they claimed it was "risky," or "immoral," or "promoted promiscuity." Does any of that sound familiar?

We don't need to go back to last century to hear those sorts of arguments, because we heard them in 2012 around the contraception debate. Women who believed that contraception should be covered by insurance were derided as "sluts."

When it comes to PrEP, we don't have Rush Limbaugh; instead we have people like David Duran writing about "Truvada Whores."

Women risked their reputations and their lives to take the birth control pill. They understood what choosing the pill could cost them, but they chose self-determination instead. The ability to prevent pregnancy was so important to these women that they risked depression, nausea, weight gain and stroke. They weren't reckless whores. They were trailblazers for women's independence and social justice.

Let's all take a step back and look at the opportunity PrEP provides us. It's one more tool to prevent HIV. Is it perfect? No. Neither are condoms. But it's safe, legal and effective.

Why don't we also stop patronizing gay men? If an individual chooses to go on PrEP, he will be required to visit his doctor and get a prescription. The doctor will draw blood, do an HIV test and counsel the patient about condom use and side effects. The decision to use a condom is an extremely personal one that it is arrived at after consultation with a medical professional. Why should anyone other than the doctor, the patient and the patient's partner be involved in that process?

There are plenty of reasonable situations where someone on PrEP might choose not to use a condom. You could have two people in a serodiscordant relationship -- an HIV-positive bottom with a suppressed viral load and an HIV-negative top on PrEP. A suppressed viral load reduces the chances of transmission by 96 percent, and PrEP is more than 90-percent effective at preventing HIV. Surely most reasonable people can understand why this couple might choose increased intimacy over condoms. Why are we inserting ourselves into their sex lives?

The birth control pill transformed the world because it empowered women when it came to their reproductive health. PrEP has the potential to transform our community by empowering men by giving them more options.

I understand that PrEP evokes all sorts of emotions, but I would urge people to take a deep breath. Let's refrain from stigmatizing language and behavior and instead create a constructive discourse around gay men's health and harm reduction. Let's have reasoned and fact-based discussions. Let's reinvest in our community by presenting gay men with all the options at their disposal and allowing them to make their own informed decisions.

If we do these things, we can reduce infections, improve the quality of life for those living with HIV and build a stronger community. Surely these are goals we can all commit to.