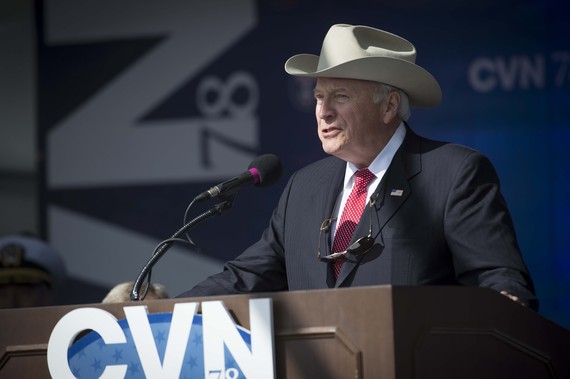 It's still all about Dick Cheney. When it comes to the Republican approach to national security and terrorism, it is his philosophy that governs. As quoted in Ron Suskind's book The One Percent Doctrine, here's the 'brains' behind the invasion of Iraq (you remember that one -- the worst decision in the history of U.S. foreign policy and the reason we now have ISIS):

If there's a 1 percent chance that Pakistani scientists are helping al-Qaeda build or develop a nuclear weapon we have to treat it as a certainty in terms of our response. It's not about our analysis ... It's about our response.

Suskind elaborated further: "At this moment the Vice President officially separates analysis from action, allows for an evidence-free model to move forward, and says suspicion may be all we have to use the awesome powers of the United States."

It was deeply disturbing to hear Republican candidates channel this Cheney-ite thinking during last week's presidential debate (or just about any other time they open their mouths). They hyperventilated about how we should respond to terrorism -- at least when it's committed by Islamic radicals, because when right-wing Christian zealots commit such acts of murder the only response, apparently, is prayer.

We heard Ted Cruz's call for us to "carpet-bomb" -- which, separate from the ethical and moral question of killing thousands of civilians whose only crime is to live in a place conquered by ISIS, military experts overwhelmingly dismissed as "unrealistic and counterproductive." We heard Donald Trump's call to simply end all Muslim immigration to the U.S.

Think about just what's happened today. The second largest school district in America in Los Angeles closed based on a threat. Think about the effect that, that's going to have on those children when they go back to school tomorrow wondering filled with anxiety to whether they're really going to be safe ... I've fought terrorists and won and when we get back in the White House we will fight terrorists and win again and America will be safe.

Only in such a climate of fear can an approach like Cheney's One Percent Doctrine make sense. Republicans are trying to whip people into a frenzy, then convince them that only by taking extreme steps can their government keep them "safe." And, of course, only Republicans have the you-know-whats to take those extreme steps because "political correctness," blah, blah, blah.

Let's all take a deep breath for a moment. Now, is it possible that an ISIS terrorist could sneak into this country posing as a Syrian refugee, despite a rigorous vetting process for refugees--one made even more rigorous for Syrians--that lasts from 18 to 24 months? Nothing is impossible. Therefore, if one applies the Cheney Doctrine, sure, we should block all Syrian refugees. And all Muslim refugees too, why not? Such proposals make sense if one treats something that is possible, yet exceptionally unlikely, as a "certainty" and ignores the real, negative consequences.

Mathematician John Allen Paulos analyzed Cheney's One Percent Doctrine and applied it to other scenarios in order to expose its folly:

Imagine what would happen in various everyday situations were the Cheney doctrine to be applied. A young man is in a bar and another man gives him a hard stare. If the young Cheneyite feels threatened and believes the probability to be at least 1 percent that the other man will shoot him, then he has a right to preemptively shoot him in "self-defense."

Or an older woman visits her Cheneyite doctor who, finding that the woman has suffered from a sore throat and fatigue for months, orders that she be put on chemotherapy since the likelihood of cancer is in his opinion at least 1 percent. Further tests, he might argue, would take too long.

As Paulos makes clear, the "response" to a potential threat might actually make us less safe than we'd otherwise have been. This reality, however, doesn't penetrate Republican thinking--if one can call it that--which demands action now (dammit!) while rejecting things like analysis and evidence. After all, those are just obstacles effete intellectuals put in the way of what real men know is the correct "response."

The Cheney Doctrine assumes, wrongly, that there are two states of existence: We are either "safe" or we are not. The reality is this: Terrorism, even though it feels like it could happen anywhere at any time, is almost certainly not going to kill you or your family if you live in the United States. Take a look at all the terrible things that are more likely to befall Americans than being killed by a terrorist, and consider how we deal with those kinds of threats. Yes, you really are more likely to be killed by a lightning bolt. Knowing the level of the threat is necessary in order to properly assess the best response.

Let's be clear, any death is devastating for the family and loved ones of the victim. Any murder by a terrorist--whether motivated by radical Islam, white nationalism, Christian fundamentalism, anti-government extremism, or otherwise--is an outrage. The government we elect is duty-bound to work to prevent such acts, and to respond in ways that enhance our safety by weakening those who would attack us. Our leaders must seek to protect our national interest and make us as safe as possible.

But the illusion that we can somehow be 100 percent safe--and that only extreme actions can achieve that goal--actually makes us less safe. In reality, that illusion leads to stupid decisions--like invading a country that never attacked us because it might, maybe, have weapons of mass destruction, even though we had no evidence it did, and it turns out said country did not have them.

Republicans want to cloud our judgment through fear, and don't seem to care whether that fear leads us to make the wrong choices. Given their history, it's hard to deny that's a feature of Republicanism, not a bug. It's up to us whether we allow them to succeed.