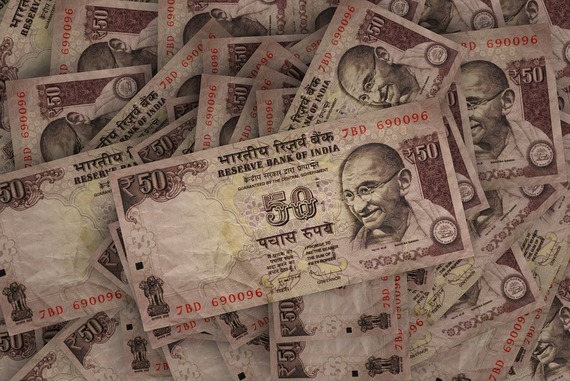 British Prime Minister Theresa May's visit to India highlights two of the most important forces shaking the world order. One is the tectonic shift in the global balance of power seen in recent decades, as the rapid resurgence of Asian economies brings to an end 200 years of Western dominance. The other is the more recent popular backlash against the project of globalization by many of those left behind in this ongoing global reshuffle.

The rise of Asia
No two countries reflect the ongoing turnaround in global fortunes more than the UK and India - one having been the world's greatest colonial empire and the other its most prized colony. When the British left India in 1947 it accounted for around 4% of the global economy. This was in stark contrast to the situation prior to British rule: in 1700 India's share of the world economy was 23% - as large as all of Europe put together.

India is now on track to return to its earlier economic position and Britain has been eager to boost ties with the rising behemoth. India is the UK's second biggest trading partner and her third largest investor. Indian firms already own iconic British brands like Land Rover and Jaguar as well as over 700 other businesses in the UK employing more than 100,000 people.

Theresa May's visit was the latest example of the one-time colonial master now scrambling for the attention of its former colony. The agenda for May's visit was dominated by the British desire for increased trade with, and investment from, India. In particular, London wanted greater access to India's financial services sector, a young industry which Delhi is keen to protect from excessive competition.

Trade played a significant role in the colonization of India - largely for the benefit of Britain. The colonizers de-industrialised the Indian economy, transforming the erstwhile Indian manufacturing powerhouse into a mere exporter of raw materials, which were then processed in Britain and sold back to India.

Recent decades have ushered in what many see as the mirror image of this process, with competition from the East and free market policies contributing to the de-industrialisation of the West. Some in the economy have profited greatly from the increased efficiencies of free trade and movement. Those left behind, however, see it simply as jobs and wealth being transferred from the poor in rich countries to the poor in poor countries, with global capitalists skimming off the increased efficiencies. Donald Trump tapped the anger well when he juxtaposed crumbling US infrastructure with globalization: "It used to be cars were made in Flint and you couldn't drink the water in Mexico; now the cars are made in Mexico and you can't drink the water in Flint".

Backlash
This has fueled the popular backlash that gave rise to first Brexit and then President-elect Trump. On the Left it has led to anger at the excesses of the global capitalist system and the rise of populists such as Bernie Sanders and Jeremy Corbyn, while on the Right it has manifested itself in scapegoating of foreigners, especially migrants seen as 'stealing' jobs that should go to locals.

May had capitalized on this latter point as Home Secretary, and became Prime Minister as a result of the Brexit vote's anti-immigration sentiment. She has pledged to 'respect the will of the people' - to reduce immigration by taking Britain out of the European Union, and to replace the economic security of membership with a new regime of global free trade deals with countries like India.

Ironically, that anti-immigration sentiment is now frustrating her ability to deliver those trade deals. India no longer see visas as charity from the West, but as chips in trade negotiations in which they are equal partners. Middle class, would-be-migrants are important actors in the Indian economy and a powerful constituency in Indian politics. Prime Minister Narendra Modi made clear that cross-border mobility would be a defining issue in his country's relationship with Britain, and pressed London for more migration options for its citizens, particularly students and business-people.

May rejected these requests, prioritizing her political survival over Britain's longer-term economic interests. The stalemate resulted in the PM having almost nothing to show for her trip, except minor MOUs on intellectual property and 'ease of doing business'.

If Britain wishes to expand trade with rising powers like India, the government will need to understand the drivers of foreign and trade policies in these countries. Armed with such an understanding, May should realise that Britain has many attributes it can leverage with India, including the large ethnic Indian population in Britain, a significant portion of which supports Modi. The historical connection can also be tapped, with India's elite still maintaining an attraction to the status yielded from association with British high culture.

But ultimately there is no escaping the fundamental tension between British Government's quest for economic ties with rising powers and the growing nativist sentiments at home. If it is to secure trade deals with countries like India, the government may need to make concessions on politically sensitive issues such as migration. Explaining the benefits of this to the population will be difficult given the Conservative Government's recent record of enabling anti-immigration sentiment. Particularly important will be ensuring that the benefits are spread across all in society. Theresa May has already shown some sensitivity to this by surreptitiously moving closer to some of the positions of Jeremy Corbyn.

If the British government fails to ensure that the benefits of migration and open trade are shared equitably, it will not win public support and will therefore have little to offer emerging powers in future trade negotiations. And if that leads to further economic decline, the people will only get angrier.

This article was originally published with the European Council for Foreign Relations: http://www.ecfr.eu/article/commentary_theresa_mays_india_visit_where_the_rise_of_asia_met_trumpism7183