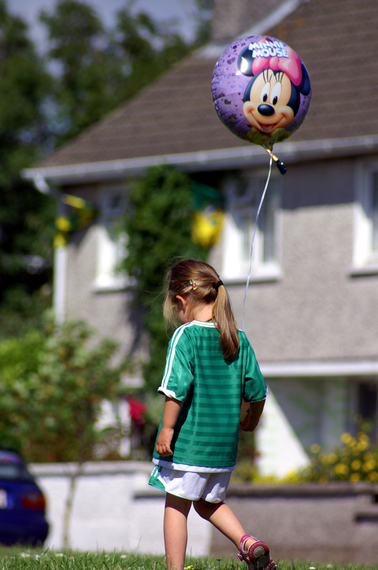 Is it just me or has the whole girl power thing gotten way out of hand? And by out of hand, I mean overly complicated? From commercials to campaigns to anthems, the call feels constant to build up our girls. Also adding to the confusion is the ongoing assumption that they even need help in the first place.

Listen, I get it. I'm a girl. I've got daughters. And, like the next parent, I want them to be treated fairly and have every opportunity in life. But as much as I've analyzed and overanalyzed the problem, and what works and what's missing, I'm going back to basics. I really think the answer elegantly lies at home, for both boys and girls. It's about how we're molding our beautiful little creatures from the earliest of moments. It's about instilling in them a foundational, unwavering belief that they can be and do anything they want.

Take this sweet story for instance. Over the weekend, my kids and I walked down the road to feed some apples to Fancy, the neighborhood horse. We dropped two whole apples into his pen but he only ate one. (Ingeniously, by the way. He crushed it under his hoof so that it was in smaller, manageable pieces!) Anyway, my daughter was so distraught that he wasn't eating hers, she starting whining "Fancy doesn't like me!" I said to her, "Elizabeth, you have no idea what Fancy's thinking. You can make this mean anything you want it to. It can mean he didn't see your apple. It can mean he was no longer hungry. It can mean he was saving it for later. Or it can mean he doesn't like you. Which are you going to choose?" These are the uncomplicated moments where our kids learn they are in control of how they see the world and see themselves.

To kill your daughter's confidence can be just as simple. Basically, 1. make her feel ugly; 2. make her feel stupid; 3. give her no positive attention; 4. give her no discernible choices; 5. put her in situations where she fails repeatedly; and 6. make her feel badly for feeling badly over steps 1-5. Obviously, I'm exaggerating to make a point. But does it really need to be all that difficult to do the opposite? Most well-meaning, loving parents are already on the right track to build, not kill, their daughter's confidence. And with a little bit of tweaking, I think we can collectively hit this one out of the ballpark! So, let's get back to basics.

Contrary to politically correct opinion, I believe girls should hear they're physically beautiful. All the time. (Especially from you Dad, who's representing the entire opposite sex.) A girl can never be told this too much. But to never hear it at all, or hear the opposite, can cause serious damage.

Intellect and talent are not the keys to success--focus and dedication are. Instead of telling her she's so smart or gifted after a test or activity, emphasize her hard work and the effort she put into it. Process praise teaches her that she can achieve almost anything she sets her mind to.

Girls need to feel connected to feel confident, and you're her grounding pole. Deep listening, snuggling and really "getting" your girl strengthens your bond, and she thrives as a result. Also ask her open-ended questions and figure out what really drives your daughter. Help her develop her own framework of herself.

Teach your daughter about the power of perspective. We have the ability to choose how we look at situations, people, life and ourselves. Even in seemingly unchangeable circumstances we can control our attitude and reaction. Help your daughter see choice and perspective as tools that put her squarely in the driver's seat.

5. Put her in situations where she succeeds repeatedly.

Guide her to find her strong suit. It's not only self-rewarding, but gaining status for being good at something brings a great deal of confidence. At the same time encourage her to get outside her comfort zone. The risks don't need to be big, and what matters most is not the result but the reward of trying.

Navigating emotions is key for girls. Work with her to identify not only surface feelings but underlying, more tender ones too. For tough emotions, explain that they're just energy waves that soon will pass. And teach her that every emotion is preceded by a thought. She can actually change the way she feels by changing the way she thinks.

Walking away from our visit with Fancy, Elizabeth started crying, "I just wanted him to eat my apple." I said, "Ok, now that's something to be upset about. I understand. I'm sorry honey. But don't make yourself also feel badly by saying Fancy doesn't like you. Be nice to yourself. Ok? Be your own best friend." "Ok Mama." Another uncomplicated moment.

Passionate about growing confident women and girls. Founder of mygirlcoaching.com and the girlsconfidenceacademy.com.