As the GPS for the Soul editor, part of my job is to write about how to be a happier, more calm individual. As a 20-something, financially-independent woman living in New York City, it's practically impossible sometimes to practice what I preach.

That being said, there are true benefits to everything that we report and reflect on. With the majority of us living life in the pursuit of happiness, there are some tricks we can employ along our journey to joy. Here are some of the takeaways I've learned just in my first year of researching these habits:

Give yourself more credit. While writing this paragraph, I deleted and re-wrote a sentence four times ("Ugh, what does that even mean?" or "No, that's stupid" were just some of the thoughts that sprinkled my mind as I typed). It's a simple truth that we're our own worst critics -- and that's never more true than when we're evaluating our own work. Soon a project you were once enthusiastic about becomes not good enough. The fact is, we're never going to be perfect -- and that's actually an amazing, beautiful thing. Approach your work with a gentle frame of mind instead of a critical eye; trust your instincts when you're doing something you know you're good at. You're probably not giving yourself the credit you deserve. (P.S., after all that, I ended up going back to my original sentence.)

Capture the moment in your memory, not on your iPhone. 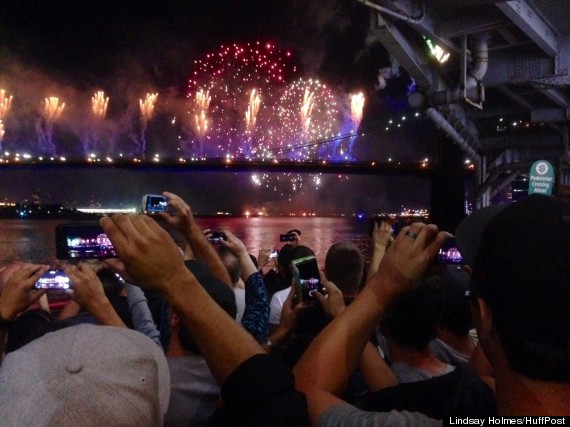 The photo above was taken on the Fourth of July during one of the greatest fireworks shows I've ever witnessed. The pyrotechnics were majestic -- and everyone was watching it through their screens. And while they may have a few blurry shots of red and blue splashed against the nighttime, they won't truly remember it: Research shows that people who take photos of art actually remember less about the work than those who just enjoy it.

Admittedly I have my flaws when it comes to my smartphone. But if there's something I'm trying to keep conscious of, it's savoring the moments that make me feel alive and happy. Some of my greatest memories come from when I truly lost myself in the moment: my favorite band's set at Governor's Ball; holding my nephews for the first time; flying over Manhattan on a one-way flight. I was blissfully present. Not even the greatest photo in the world could capture that feeling.

Smile or talk to at least one stranger. Forget what your parents told you about not interacting with strangers now that you're an adult. While we generally tend to ignore people during our commutes, recent research found that talking to strangers actually increases positive experiences. Another study also makes the same case for becoming friends with your neighbors. Those who felt more connected to the people next door were less likely to experience a heart attack over a four-year monitoring period.

It's OK to be upset every now and then. In one of the most culturally classic and dramatically important movies of our generation, The Holiday, Cameron Diaz's character confesses that she hadn't shed a single tear since the age of 15. Seriously. While that stoicism may sound like an easy way to live life, the truth is we can't keep it together all the time. In fact, research even shows that keeping constant composure could jeopardize our physical and mental well-being.

Listen to your brain as much as your body. When there's something wrong with us physically, we feel it -- a sick stomach, a pounding head, an aching joint. The body screams when there's pain, but the mind is much quieter.

In an interview with John F. Greden, M.D., the executive director of the University of Michigan Comprehensive Depression Center, he explained that we often separate the two when in reality they work in tandem. "Unfortunately, in health care, we tend to split the mind and body sometimes," he told The Huffington Post. If there's something discomforting prickling at the back of your thoughts -- don't ignore it. Don't chalk it up to just "being emotional."

It is possible. As a little, overly-tan Florida child, it was my dream to live and work in New York. As I got older and graduated from college, that vision seemed more like a pipe dream than a reality. But persistence paid off -- and it will for you too. In fact, research suggests that persistence and positive thinking pay off when you're searching for a job. I am so, so thankful that mine did.

Speaking of thankfulness, practice gratitude. Research suggests that an attitude of gratitude boosts your well-being, helps you sleep better and even benefits your heart. Need help getting started? Try our 10-day Gratitude Challenge.

When all else fails, dance it out. Or sing it out, craft it out or run it out. Just do something healthy and constructive to boost your mood when you're down (no, tossing back those glasses of wine don't count -- although sometimes I wish they did). Letting out bad energy opens up space for good vibes to come in. And who doesn't want to dance around to the boy bands of yesteryear every so often, anyway?