For over twenty years, artist and photographer William Giancursio has created storylines about men who have sex with men through photos, drawings and paintings -- all on a remarkably miniature scale.

Much of his work uses action figures to represent gay men and Giancursio places them in environments and scenarios familiar to the queer community, including Fire Island and other typically gay vacation spots. So far, he has published six books using these action figures for his work.

"The paintings are allegorical and symbolic and portray various aspects of gay culture, such as sexual liberation, love and loss, cruising and the AIDS crisis," Giancursio told The Huffington Post. "I staged the action figures, photographed them and then used the photos as reference material to do the paintings. As the photos became more conceptually complex and intricately detailed, they evolved into storylines and gay-play storybooks."

The Huffington Post talked with Giancursio this week about his work over the years and what he tries to accomplish with each piece he creates.

The Huffington Post: How did you begin using action figures to depict different aspects of gay culture? How did your work evolve?

William Giancursio: When I grew up, if boys played with dolls they were considered sissies. When Ken, G.I. Joe and all of the rest of the action figures came along, I was too old to play with toys, but the appeal of playing with these toys and all of their clothes and accoutrements remained. What better way to secretly embrace childhood once again? As children, life was so enchanting in our imaginary world of playful escapism. And so the idea of using toys to represent gay men was born, and evolved from simple and carefree, to serious and thought-provoking. The toys, once considered elements of carefree play, took on different meanings when faced with the reality of life's complexity. The ambiguity of a grown up reality disguised as carefree play became the impetus for my work for many years to come.

Prior to the Stonewall riots and the beginning of the LGBTQ movement, Judy Garland was a profound gay icon. Because of Judy Garland's strong connection to the gay community, the phrase "is he a friend of Dorothy?" became a code phrase gay people used to identify each other. Back in 1990 I did a large oil painting titled "Friends of Dorothy." The painting was meant to be a political statement about President Ronald Reagan's failure to address the AIDS crisis during his administration. I used action figures to represent the men who were sick and dying of AIDS. They are depicted flanking a doll of Judy Garland's character, Dorothy Gale, from the Wizard of Oz. Across the sky the words "help them" appear. Superficially, the painting was playful and cute. Upon closer inspection, the serious intent of the painting became apparent.

For many years afterwards I used action figures in my paintings to represent gay men. The paintings are allegorical and symbolic and portray various aspects of gay culture, such as sexual liberation, love and loss, cruising and the AIDS crisis. I staged the action figures, photographed them and then used the photos as reference material to do the paintings. As the photos became more conceptually complex and intricately detailed, they evolved into storylines and gay-play storybooks. All of them using action figures to represent the lives and times of gay men.

Do you consider your work a commentary on gay culture?

As an artist who is gay, it is often difficult to separate my identity from my work. I take chances with the issues that I portray without fear of societal homophobia. My work is very much a commentary on gay culture. My paintings and photo books are thought-provoking, and are designed to portray a miniature world of make believe, as well as to elevate gay awareness. My first gay-play photo book, Our Gay Wedding Day (2007), was politically motivated by the early Supreme Court case, pending in Hawaii, regarding the legality of gays to marry. Hard (2008), my second gay-play book, is about our obsession with working out at the gym and body image. Gaycation (2008), Gaycation 2 (2010) and Fire Island Pines (2014) follow a group of gay men to exotic and erotic places where gay men vacation. Brush Burn (2010) is about the libertarian elements of nudity and sexual desire among men who choose to celebrate their sexuality.

What can we come to understand about ourselves as queer people through these fictional depictions?

What we can come to understand about ourselves as queer people is that we are very much a positive part of the fabric of society, not only as adults but as children who grow up to be gay. In the mid 1970's, thanks primarily to the feminist movement, the concept of sexism and the manner in which children are indoctrinated made many of us question the nature of play, and the toys which reinforce play. Feminism made us think twice about the trucks and war toys we gave to little boys that strengthened masculine stereotypes of aggression, while baby-dolls instilled maternal behavior in every little girl. As a male child, I was denied the joy of playing with dolls, little people, friends who could give me endless hours of play scenarios. Today, my work is more like play, but it is more conceptually about the nature of gay play. In my gay play strategy, though, Ken kisses GI Joe, not Barbie. My work is also a serious and lyrical look at who we are, what we do and some of our aspirations. It is a visual journal of gay culture and the natural order of things from a gay perspective -- boys with boys, and girls with girls. Because I am not ashamed of my gay orientation, I take pride in portraying the culture it represents through my artwork. I hope every LGBTQ person who sees my work will identify with it in some manner, and come to understand that queers create, inspire and perpetuate a culture of beauty, awareness and diversity.

What do you want people to take away from your work?

A smile. A sense of joy and pride. A reason to question. A reason to be. Instead of wasting your life wondering how you fit in, create a place where you do. I believe that the intrinsic nature of art is neutral. Art is a catalyst which speaks to us on many levels. These levels are variable depending on the unique understanding or lack thereof on the part of the viewer. This "truth" to me is absolute, so in the best sense, what one brings to the experience of viewing art, as in all things, determines what one will come away with. At its best my art is ambiguous and ironic, because in every painting and photograph lies the co-existence of truth and falsehood. My paintings and photographs also reflect a central truth about the lives of gay men; things are not only as they appear to be, but they also appear to be other than what they are. To inform, communicate and enlighten is what my art is all about.

Check out some more images from Giancursio below. Curious to see more or purchase his work? Head here. 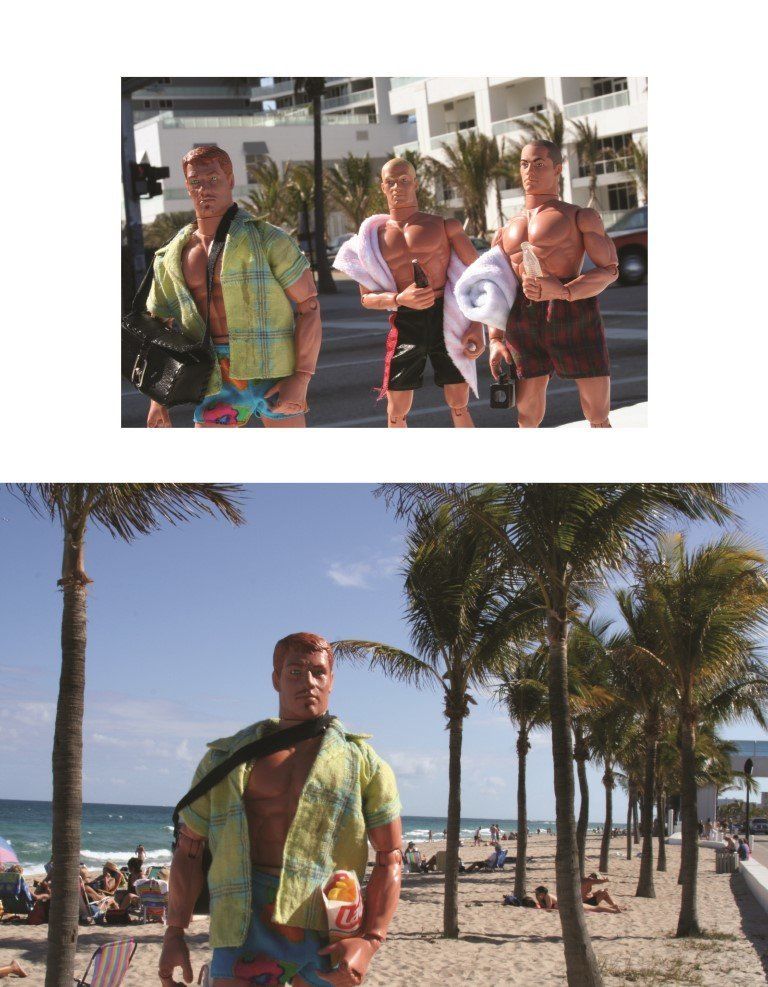