Despite what most of us think, chocolate doesn't appear fully formed out of thin air, a gift of the flavor gods to us gluttons.

Instead, it starts as a cacao flower and pod on a TREE. (While this has convinced some people that chocolate is technically salad, this isn't quite the case.) The process of creating chocolate from that tree pod is long and complicated, which is why Ecole Chocolat and I have partnered to put together a four-part series about where the heck chocolate comes from. We hope to tell the story as simply as possible, and while we may not capture all of the nuances of post-harvest and factory processes, we hope people remember the image.

Here's the first stage of the process, before the chocolate maker even gets his or her hands on the beans. 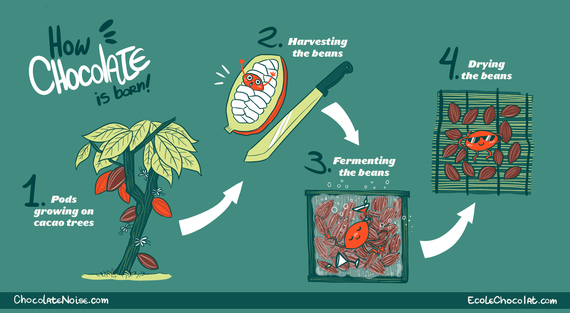 First the ripe cacao pods are cracked open and the beans are harvested. Then our friend the cacao bean gets chocolate-wasted off fermented cacao-pulp martinis and tans in the sun until he's all dried out.

And here's the second stage of the process, at the chocolate factory. 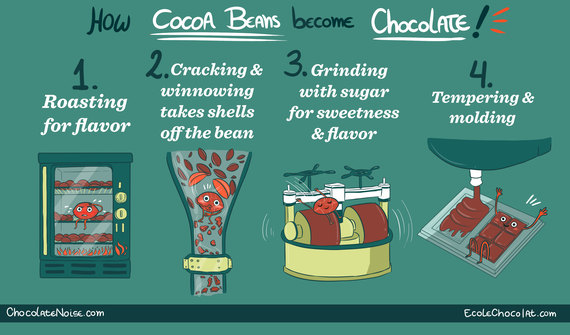 Our little cocoa beans get toasted brown and chocolatey in the roaster. Then the beans are cracked and their outer shell winnowed away, getting naked for all the world to see (in an SFW kind of way). The part of the bean that's left is called the nibs. After that it's a trip to the grinder with sugar and sometimes extra cocoa butter for sweetness and flavor. Then the chocolate is tempered, a process that uses temperature and motion to make sure the chocolate hardens shiny and stable. And last but not least, the chocolate is molded into bars!