They were lying on their tummies in the "fireplace room," their shoulders touching, their hair glinting. The radio was on and our puggle was napping on the chair closest to them. The sliding glass doors were open wide. A neighbor was mowing. Another was hammering. And a third's baby was crying so loudly that I sent a thought of solidarity to his mama.

They had a clipboard between them and in my daughter's beautiful print, they had the roadmap of our day.

As I walked into the room they stood, they shared, they handed me my purse and off to the store we went because who am I to argue with a well-thought-out plan?

And just a few hours, two tries at a poster, one frustrated re-do of the menu and a gazillion "loads of cookies" as my son said (Like "loads of laundry," I think?), we were open for business.

So this was the scene my husband came home to. As we watched him drive into the cul de sac, I could feel the smile on his lips, see the crinkles by his eyes. "He's sweet," my daughter said. And while my guy is most definitely sweet, I knew they were playing "Sweet and Sour" -- sweet if you waved to them, sour if you didn't. This night was filled with "sweets."

It was lovely. Breezy and cool enough to demand a sweatshirt by the end, but bright and sunny enough to require the kind of smiling squints reserved for people you're happy to see.

They sold more cookies than my husband and I thought they would. And we let them eat more cookies than they thought we would. They played Sweet and Sour from beginning to end and waved to every single person -- in their cars, or on their bikes or by foot -- who went by.

At the end of the night, when they were done and tired and rosy-cheeked and flyaway-haired in perfect captures of summertime, I asked them what their favorite part of doing the stand was. And you know what? Not one of them said, "making money."

Although my 5-year-old did look my husband in the eye, his tiny hands splayed on his knees, hazel eyes intent, purposeful even, and peeking through too-long golden locks (all you moms who thought to get haircuts the first day of summer, kudos) and said, "Well dad, should we go on vacation?"

To my husband's credit, he met his eye, his look, his plan with, "Yes, I guess we should now that we have all that money. Thank you, B."

And my little guy, honest-to-goodness, beamed. So there was that.

But later, when we sat around the table slurping noodles and sipping (somewhat ironically) lemonade, money tucked safely aside, and I asked, "What was your favorite part?" what they said was the people who honked. The guy who told us about his daughter (he was my favorite, too). The people who backed their cars waaaaay back to see us. The family that walked all the way here. The guy on the bike. The little boy who brought his own money.

My oldest, who is suddenly tall and slender and funny and sweet in ways that I still strive to be, summed it up well, "It was just the people."

I think she's onto something. This is what makes a cookies and milk stand, a summer, a moment, great -- the people we share it with.

These are the people who stop at "lemonade" stands. 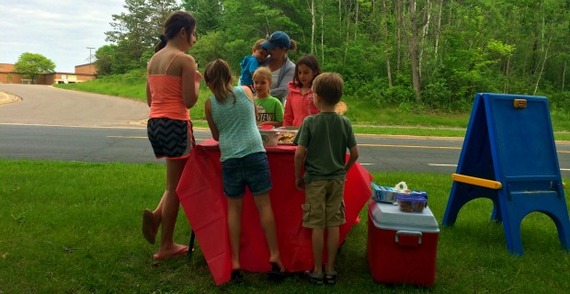 The woman on a walk who was their very customer. Who read their sign slowly, deliberately, then listened carefully to the kinds of cookies they were selling -- three times -- as each one of our kids wanted to make sure she knew all of her choices. She had them count her change and talked only to them. They adored her instantly.

The woman who said, "keep the change," giving them a $4 tip. And when we called out, "Thank you so much!" she was the one who looked back and said, "Of course." In a way that we could tell she meant it.

The tall guy with the facial hair and the gruff voice and the big, loud truck -- who chatted with them for a good five minutes about the cookies, the sign, what they would do with their money. (He was also the one who gave them a thumbs up and called out his open window, "They're great!" as he drove away. "Definitely sweet," my daughter said.)

The young family we know in the new way, with a baby in a stroller and another coming soon, who passed us on their evening walk saying, "We'll be back" and made true on their word a short time later. The dad chose carefully while the mom confided, "Cookies are his weakness." And we laughed together in the threading way that sunsets and breezes and stopping for each other allow.

The little boy who brought his money to buy his "very own" cookies, and the good mama who let him.

The friends who stopped by between dinner and sports, post-errands and pre-bedtime showing all of us what you can fit in when you try and what matters when you take the time to think about it. Or maybe just what you do when you're not thinking too much or too hard.

The teacher who walked over from her cul de sac to ours raising her status from "Sweet" to "Celebrity." Even during the summer months, there's nothing quite like a teacher's heart, is there?

The young couple with no kids, nice car, nice clothes, nice hair, who backed their car up to stop, to smile. To make our kids' night.

The runner who made it a point to circle back -- hot, sweaty, water in hand and a dollar for each of them. "I saw you wave," she said, proving to them, to us, how very much a smile and a wave can do. She made eye contact with each one of my kids and repeated, "You're doing such a great job here." And I could see each one of my hearts stand just a little taller with each one of her words.

And this guy. This guy who told the kids about how his own daughter used to have "rockin'" lemonade stands -- top-notch operations using his catering-grade lemonade and a walkie-talkie to tell mom when she needed to refill. "How old is your daughter now?" I asked. "23," he answered, with a look in his eyes that I recognize, that I have when I think about my own "used to be's." He ate his cookies standing and chatting with us, then he went to his van and blew up two balloons to put on their sign. My husband helped him attach them. I think we were all sad to see him go.

The little girl we saw pass one way and could see -- even from where we were -- her eyes light and her cheeks raise as she pointed and said, "They have cookies!" And the mama we wanted to high-five who U-turned that car right there and then and showed her daughter -- and our three kids -- that some things are, indeed, worth pointing and squealing and stopping for.

The dad on a walk with his little one, who handed him a cookie grown-up fingers to tiny, chubby ones. "We'll bring one home to mommy." Is what he said. Kindness can be (so easily) passed on is what I heard.

The family we know who we tried to give free cookies to because this was their second time through and they were so kind and so generous to our kids. But who looked at us with a look that clearly said, That's not how it works, and listened to the menu, carefully picked a cookie, and even asked for some milk.

The neighbor we rarely see whose kids are grown and gone but still come home to pass footballs in the cul de sac. Whenever I see him and his wife I feel like we offer each other a trade of sorts -- a look at their past for a peek at our future.

And the family who closed the place down with us who said they saw us on their way out to dinner and had skipped dessert to come back and see if we were still there. 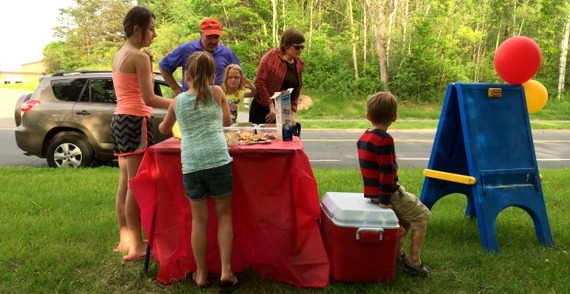 So these are the people who stopped at our "lemonade" stand. The ones who shared the night, the moments, the kick off to summer with us.

The ones who -- in five minutes or less -- showed our kids the value of being Sweet and slowing down, of noticing the people around you and that, sometimes, it's the simplest kindnesses that go the furthest.