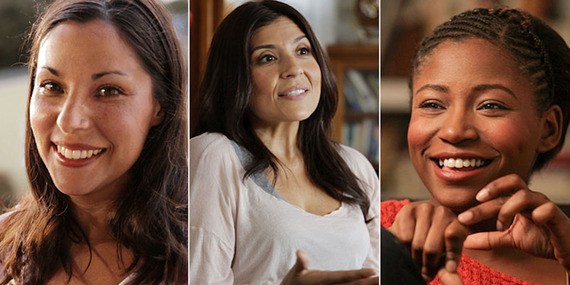 "I was talking to somebody about doing this project, and, she's like well, 'Tell me what it's about?' And I go, 'Well, it's about, you know, women's pleasure." And she goes, 'Well what do they want you to do?' And I'm like, 'Well first I explain to them how I masturbate and then I show them, like... on my vagina.' And I go, 'Wait, why did I just whisper that? I'm talking to you. You're my friend! Why did I just whisper that to you?' And I'm like, 'That's exactly why.' Because, you know it's like hush hush. Don't talk about it. We all want it but we don't talk about it." 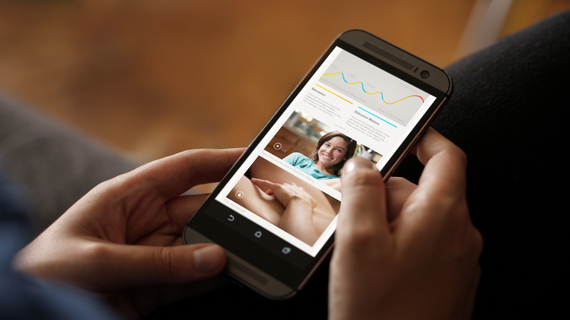 We're still living in a world, not my world, but a world, where we censor the word clitoris on television and pixelate breasts that belong to a headless bronze statue during the five-o'clock news. If our sensitivity to sex wasn't obvious, blurring a half-nude, bronze, headless statue should tell you where we're at. We're not in a good place...

OMGYes is the offspring of Lydia Daniller and Rob Perkins, the former college roommates at U.C. Berkeley and now lifelong friends. The two worked on the concept for years thanks in part to the realization that nobody was doing anything constructive about the topic of sex, why we hate talking about it, why we're uptight when someone around us starts to talk about it, and why everyone has failed in really understanding the deep pleasures we have in it.

However important OMGYes is, it's a project that had to wait for technology to catch up to it. But more crucial perhaps was the need to wait until a younger generation was maybe able to carry it a bit further along. OMGYes probably couldn't have happened decades ago or even ten years ago, as Perkins told me over the phone. "We would've had to have focus group after focus group and to get word of mouth and traction that way is really difficult." So OMG turned to the internet as its delivery system when it launched back in December.

But don't make the mistake thinking OMGYes is pornography-- a common misconception that I got when talking to people about what it is that I was writing about. And after spending weeks on the website, I feel defensive even comparing OMGYes to pornography. Diana, one of the women who is featured in the videos, told me that one of the main differences in the site is that "it has a purpose. It has a goal. And it has a very important purpose and goal. Pornography is going in the direction of pleasing the person who's watching as opposed to educating the person who's watching it," she said. "It's a learning opportunity for women to learn about themselves."

The following video is a demonstration of OMGYes' "touchable videos." It may be considered sexually explicit and NSFW. Viewer discretion is advised.

SFW Explanation from FGS on Vimeo.

I became aware of OMGYes sometime after it launched in December of last year, thanks to a friend who had been using it. I knew it was interesting enough to write something about, I just didn't know what or how, because I think, as a male, the project is revolutionary in its goal of making sex education shameless and open.

There have been many articles written about OMGYes since its launch. About the science and the data behind it. But nobody has yet to hear from the women behind the sexual phenomena. So I did.

I spoke to three of the women who bared all (literally) about what the process was like to have cameras all around them during their most intimate moments.

But finding these women was almost an impossible task, thanks in part to the strict confidentiality that Danniler and Perkins afforded the women. It took weeks to track these women down, and that's with the help of their publicist. Their real names never appear on the site or in the videos, so I too, will use their character names.

The final product, what you see on the screen, is a result of years of research and initial studies conducted by OMGYes from more than two-thousand women, ranging in ages from 18-95. To get a better idea of what these women thought and how they thought (about sex), I thought it would be important to speak with women of different ages. So I spoke to Diana, a recent college graduate. Amber, a 32-year old military-wife and mother. And Maria, a 46-year old, divorced mother of three.

The project began, as they all told me, with a simple Craigslist ad, written by Danniler and posted for women who might be interested in a study about sexuality, but focusing on women. Diana mentioned her hesitation in the beginning -- responding to Craigslist ads mentioning sex studies can set off the creep meter. But whatever hesitations the women had in the beginning were quickly relieved, thanks in part to Danniler's motherly process. "She (Danniler) really made you feel like you were talking to your girlfriend on the couch on a Friday night. She made it so comfortable for all of us," Maria told me. And that wasn't just by accident. Danniler spends most of her time as a photographer, so by default, making people comfortable in front of the camera comes natural to her. Diana told me that even up until the moment she was taking her clothes off to start filming, she was assured, "if you want to back out, you can. Don't worry."

But she didn't. Nor did any of the other women. They viewed Danniler as sort of a surrogate, collectively sharing similar experiences and hoping to make those experiences even better by opening up a dialogue.

And I got that level of comfort when speaking to Perkins. Both seem to be on a genuine journey to help people with better sex education. Because sex ed goes well beyond, "this goes in here and then a baby comes out." (and then you're stuck with it even through college 'cause they'll move back in with you and totally cramp your style--amirite?)

What I really wanted to ask the women is what their thoughts were about why in (insert cliché) 2016, sex is still a taboo subject. Why are we still not openly talking about it, and especially why we're not talking about women's pleasure, specifically. "I don't think necessarily that women aren't interested, they just didn't know to be interested," Diana told me. "And with women's pleasure, there are certain things that you don't even know that you don't know it.

Amber told me the site is really "about removing taboos and educating people about better sex." Which is why she participated in the project. "From my personal experience, there was a lack of communication about sex and how to make it pleasurable for women. I'm happy to know that maybe there are people out there that won't have to go through that. It'll help them."

And then there was Maria, the older of the three, who is the product of immigrant parents and grew up in the midwest. "First generation and living in the midwest," I said, but was cut-off when she answered, "Ya, sex was never talked about growing up." When I asked her who she's told about participating in OMGYes, she said, "some younger coworkers know about it. They seem to be more open about the project. But I haven't told most of my peers, and definitely not my parents."

Joking aside though, the hush around sex is often times a result and combination of both cultural and societal experiences and environments. Which is a very real and serious issue.

The uncomfortableness we have about and around sex is like a pie chart of naiveté. The issues are borne partly out of culture or silly fears, partly out of ignorance, and partly of out of embarrassment. But Danniler and Perkins, with the help of these sexual rock-stars, are trying to change that.

Maria was 36-years old when she experienced her first orgasm-- her first real orgasm. A sexual wait thanks to a number of previous partners who were never sexually interested or adventurous. Not surprisingly, all three of the women I spoke with said the same thing, that there is a huge void in sexually knowledge with the average male.

When Maria did have that first orgasm, she described it to me over the phone as if it was a reawakening of some sort. "It was like, oh my God, did I just die? What was that? And that stimulation is what gave me that idea of, 'Ok, I've never been touched like that. What do I need to do to get that again?"

And that's the goal, I suppose. Of course, it's more than just coming. It's about being comfortable with your body and accepting it, however it looks, being open about what your body wants, listening to it, and understanding how to achieve what it wants with not just yourself, but with your partner there next to you.

Sex is cultural. Certainly. There is a lot of it that depends on your environment. But more of it depends on being self-aware. It's trying to assure you that when you're at home, it's okay to enjoy yourself. It's okay to explore and find new ways of pleasure. To experiment. To be comfortable. As Maria said, "It's the most loving thing you can do for yourself. And you're then able to help your partner love it as well."

All images and videos used with permission from OMGYes