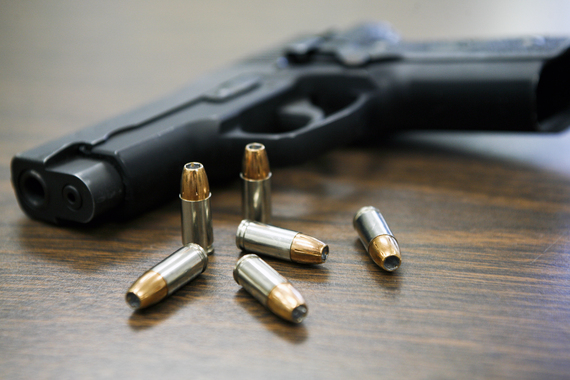 The ill-fated shooting at Sandy Hook shook the nation in 2012, in which 20 children and six adults lost their lives in a mass shooting in Newtown, Connecticut.

However, in the three years that have passed since that tragic event, there have been at least 1,044 mass shootings, 1,327 fatalities, and 3,784 wounded victims, with little accomplished to prevent the loss and mourning of more lives in the future.

As policy-making has proven to be a slow route in remedying the recurring state of gun violence in America, some have turn to innovation to prevent disaster when violent situations arise.

While talks of technologically advanced firearms are underway, there are now several devices that can be implemented swiftly and effectively in schools, homes, and offices in the event of gun violence.

Gunfire detection: ShotSpotter is an invention that detects gunfire through a series of microphones. This device uses a specific algorithm to identify if the sounds it picks up are gun shots. The audio recording is then sent to a monitoring center in California, where the audio data is analyzed by experts. The results are then sent to local police officers - and it all occurs in less than a minute.

Gunshots are difficult to detect by ear, which is why ShotSpotter is useful in determining the presence of danger. ShotSpotter also reacts more quickly than a person would; the time it takes to alert the local authorities is approximately 30 seconds, a flash compared to the time it takes for someone to dial 9-1-1 and call the police.

Currently, ShotSpotter is operating in over 90 cities, and can alert police and SWAT teams to the precise location of the shooter. The device records data and trends in shooting events, and can even distinguish types of arms being used. The tracking element provides key insights that allow police and military teams alike to control certain areas that are most prone to gun violence.

Door security: The Sleeve is a device that secures doors from the inside. It's a carbon steel case that encapsulates the door's closer arm, disabling the function of the door and effectively sealing the door shut.

The concept arose after Daniel Nietzel, a schoolteacher, participated in active shooter training at West Middle School in Muscatine, Iowa where he teaches.

"We were instructed to tie a belt or a cord around the closer arm. It seemed like a logical way to secure a door without having to go into the hallway, [but] it took us a long time to get a cord, stand on a chair, and tie a knot, which could potentially be the most important tie of your life." (Discovery News)

This device simplifies the process of locking a door from the inside of a classroom or office - wherever one might fight closer arms on doors. The device itself is tested to withstand over 550 pounds of force, and is custom-made to fit any door.

Now, Nietzel serves as founding president of Fighting Chance Solutions, the vendor and creator of the Sleeve. The Sleeve is developed, designed, and manufactured in Muscatine, Iowa, and is available for purchase online.

The Classroom Secure RLS can prevent potential disaster in milliseconds. While school doors typically lock from the outside only, this device locks civilians within a room without exposing them to the outside.

The Classroom Secure RLS webpage encourages site visitors to support schools by donating to their Kickstarter campaigns online, with funds enabling the school to receive door-locking devices for free.

Multiple entry security: The Barracuda is a free-standing, door-stopping device that can be transferred to other entry points. Without required maintenance or installation costs, the Barracuda is a great combination of inexpensive and effective.

The versatile, transportable innovation is manufactured by the Bilco Company with the help of Troy Lowe, a military veteran and law enforcement professional who uses his field expertise to design the Barracuda barricade devices.

As we wait for policy-makers to improve legislation surrounding the access and distribution of firearms, more civilians and law enforcement officers take matters into their own hands, and team up with innovators and manufacturers to sever the repetitive streak of civilian deaths.

Once technologies like the Barracuda have been patented, we can expect to see an expansion in development - and hopefully a reduction in fatalities due to mass shootings.