There is nothing better than a romantic dinner to set the mood, but what type of meals you chose may be just as important when it comes to quality lovemaking. Your sexual performance and libido strongly depend on the state of your health and your health is greatly influenced by your diet. So eating healthy is bound to have a positive effect on your sex life. But food's role in sex goes far beyond its health-promoting benefits - certain foods can influence your hormones and some even work as aphrodisiacs. So you're probably wondering how you could use food to your advantage for a better sex life. To help you spice things up a bit in the bedroom, here are a couple of diet tips and tricks that you should try.

Eat less to set the mood
It may seem counterintuitive to restrict your daily calories for better sex, but studies show that calorie restriction is key to great sex. A study published in this year's issue of JAMA Internal Medicine examined the effects of a 2-year-long calorie restricted diet on mood, sleep, quality of life, and sexual functioning in 218 healthy adults. According to the study's findings, most subjects reported feeling better and having better sex. The test subjects also lost around 16.5 pounds on average which was to be expected. Calorie restriction was found in many studies to offer a wide range of health benefits. An article published in Antioxidants & Redox Signaling even states that calorie restriction is the only intervention to date proven to decrease the rate of aging and increase overall lifespan. 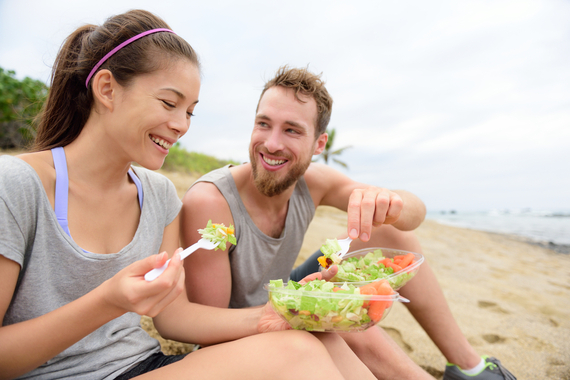 Don't exclude animal sources of food
Plant-based diets are all the rage now, and while these types of diets can be considered good for your health and the environment - they may not be as great for your sex life. As it turns out, protein in food plays an important role in circulating free testosterone - the hormone most responsible for a healthy sex drive in both men and women. One study even found that a low protein diet resulted in decreased testosterone bioavailability. As you probably already know, the best way to get your protein is from animal sources such as meat, dairy, and eggs. Although plant-based foods do contain protein, the quality of this protein and its absorption rate differ from that of animal origin. Eating a reasonable amount of dairy, eggs, and just a little beat of meat will keep your hormones balanced and your sex drive sky high.

Don't overdo it with the soy
Soy is considered a revolutionary food and it has been consumed for centuries in some Asian countries. However, eating too much soy can spell disaster for your sex life to say the least. If you're thinking about replacing your protein sources with soy-bases products, we advise you to think again. A study published in a 2011 issue of Nutrition was the first to report a case of impotence caused by consuming large amounts of soy products. According to this study, soy products caused a significant drop in testosterone levels in the healthy 19-year old male in question. His impotence was reversed once he discontinued taking soy.

Eat more aphrodisiac foods
As Frank Lawlis Ph.D. explains for Psychology Today, your sex drive is strongly affected by what you put in your body. Try adding true and tried aphrodisiacs and see if they will boost your sex drive. Oyster, for example, are high in Zinc and omega-3 fatty acids. While Zinc may have a favorable effect on sperm count, omega-3 fatty acids improve brain health (and we all know that sex starts in the brain). Banana is also considered an aphrodisiac probably due to its suggestive shape, but bananas may also boost your sex drive due to their high B vitamin content. B vitamins are important for sex hormone production. If you suffer from premature ejaculation, you can include more oatmeal which is a function food that seems to boost serotonin levels - something that should prove to be helpful in treating premature ejaculation.

Conclusion
No matter if you suffer from erectile dysfunction, premature ejaculation, a low sex drive or if you just want to spice things up in the bedroom, there are dietary interventions that could help you. Eating healthy was found in a great number of studies to improve a person's overall health, and this inevitably shows on sexual functioning as well. But certain foods can also boost your libido by working as aphrodisiacs. On the other hand, certain foods seem to have an adverse effect on sexual functioning and if you don't want to ruin your sex life, then make sure to avoid these foods.