Sometimes the absurd details are what stand out the most when Russians describe the effects of the new and ill-defined anti-gay "propaganda" law on everyday life.

One gay couple I spoke with, newly arrived in the U.S., recently posted photos to Facebook of their wedding day at New York City Hall. Their parents back in Russia sent them congratulations, and so did the elder sister of one of the grooms, but she had to wait until evening to look at the pictures online, after her children had gone to sleep. "After all, it's illegal in Russia: You can't show the kids," her brother told me. Another Russian, a journalist who was recently fired from his job after he came out, described the rhetorical gymnastics that his former network had to engage in to report on the Cannes Film Festival earlier this year without mentioning that the winner of the Palme d'Or, Blue Is the Warmest Color, is a steamy lesbian romance.

Thus is the work of trying to make LGBT people in Russia invisible, carried out by President Vladimir Putin's ruling party. The new law banning "homosexual propaganda," passed in June, has only been applied a handful of times to date, but that's enough: Individuals and institutions change their behavior accordingly so as not to run afoul of it. But like most heavy-handed attempts at prohibition, the law is also triggering a powerful backlash, uniting the Russian LGBT community in new ways, out of necessity and solidarity, and making outspoken activists out of people who previously lived their lives quietly and under the radar.

For some other LGBT Russians, it's pushing them to speak out in a different, more intimate way -- sharing the details of their love lives, the ups and downs of their relationships, memories of their first kiss -- making public the parts of their lives that are, under current Russian law, now illegal in the telling. These are the stories that I and a colleague, Russian journalist Masha Gessen, are chasing down right now: love stories from LGBT Russians living in Moscow and smaller cities all over the country, and from Russian émigrés around the world, who make up an increasing flood. We're collecting them in a book, Gay Propaganda, which will be published in both English and Russian on the eve of the controversial 2014 Olympic Winter Games in Sochi. 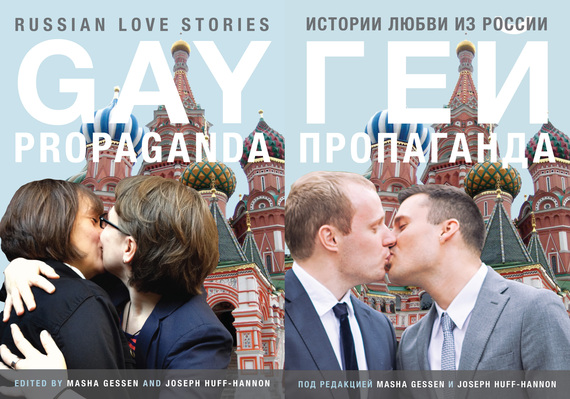 We know that Russian publishers won't touch it, and Russian bookstores won't sell it for fear of fines or worse, but we're going to try to get it passed around and distributed as widely as possible in Russia, including via a free e-book download. It's ironic: In the same way that the upcoming Winter Olympics are likely to be the gayest Olympics ever thanks to all the controversy surrounding the "propaganda" law, it's also inspiring an outpouring of Russian LGBT love stories.

This also happens to be a very personal project for both Masha and me. Masha is making plans to move her family out of Russia by the end of the year, for fear of a proposed new law designed to take kids away from their parents if the parents are gay, something she's written about recently. My boyfriend was born in Moscow, and though he's lived most of his life in the U.S., we've talked about going to visit sometime, but circumstances being what they are, it increasingly doesn't feel like a very desirable option. You get used to certain things being out and open, to being able to book a hotel room together without needing to use some cover story, to not having to lie to friends or family or new acquaintances about who your partner is or what they mean to you, to holding hands occasionally in bars and cafés.

Cynical politicians are trying to erase the reality of millions of Russians, but they're also learning that reality is slippery, and that like Princess Leia says in Star Wars, "The more you tighten your grip..., the more star systems will slip through your fingers." One Russian woman whom I interviewed for this project told me that she thinks that 25 or 30 years from now, when we look back at this moment in Russian history, it'll be seen as the moment that the fight really began. I certainly hope she's right. In the meantime, may a thousand LGBT Russian love stories bloom. Long live gay propaganda.

For more information on our book, Gay Propaganda, click here.

If you're Russian, either living in Russia now or living abroad at least in part to live out and openly, and have a great love story to tell, I'd love to hear from you. Email me at joseph.huffhannon@gmail.com with a bit about yourself.