My 6- and 8 year-old girls absolutely love to play with dolls. Most any dolls will work, but Barbies and Disney princess dolls are their favorites. They've always been creative in their play, but lately, I've noticed them role playing some interesting scenarios and incorporating other toys into their play. One day, I walked into their room to find them sculpting rouge-colored pencil dresses for their Barbies out of Play-Doh. Taylor had created a few haute-couture bridesmaids dresses complete with scooped necks and flared skirts for Barbie and Ken's upcoming wedding. I was starting to think I had a couple of Vera Wangs on my hands! I asked them where they got such a great idea, and they showed me a YouTube video like none I'd ever seen before.

It was basically a couple of grownups talking in high-pitched voices and playing with their own collection of dolls and toys. Turns out that the video wasn't an anomaly. In fact, there are several channels out there that do this, including All Toy Collector and The Mommy and Gracie Show. One of them, Disney Cars Toy Club (not officially affiliated with Disney and known on YouTube as DCTC), is fast approaching a million subscribers. I watched a few of the videos and found them a little odd but kid-friendly enough. I was amused and impressed at how my girls interacted with these videos, so I gave them the green light to subscribe to a couple of them.

Even so, I still didn't quite understand why my daughters were so intrigued by the concept of watching adults playing with toys. My older kids (12 and 15) didn't get it either, and my 12-year-old asked, shouldn't they be playing with their own toys instead of watching other people play? I reminded my Minecraft-obsessed tween that he enjoys watching other YouTubers play the game, but he didn't see the connection.

When Work and Play Intersect

As I began to investigate a bit, I found out that there are quite a few adults making toy videos on YouTube as their full-time jobs. One such YouTuber, Brandon Haynes, co-founder of DCTC, agreed to speak with me about he and his friend Amy Jo's motivation for their work. He told me that the channel began as a hub for gaming videos, but expanded as it attracted more girl subscribers. The two of them have many years of experience working with young children and seem to genuinely enjoy what they do. Amy Jo and Brandon were nice enough to Skype with my little girls for an hour. They were ecstatic! 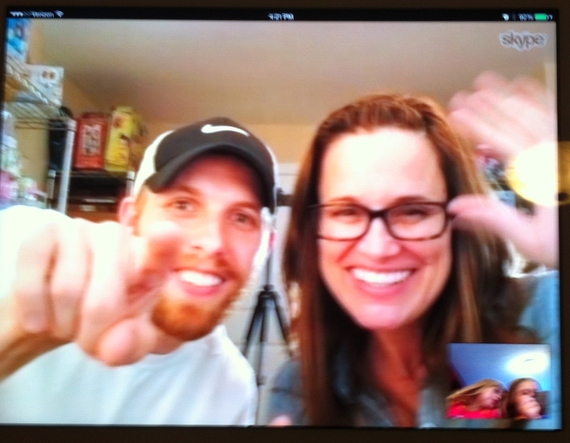 Our Skype Chat with DCTC!

I asked them what they hope to accomplish through their videos, and they told me "if our videos make others laugh, smile, and feel happy, we are thrilled."

What's the Allure for Kids?

So playing with toys for a living definitely sounds like a sweet gig, but why is there an audience for this type of content? When I asked my girls to tell me what they liked about these toy channels, I got an earful. While 6-year-old Taylor simply told me she enjoyed the videos because they were "funny," my 8-year-old had a lot more to say. She told me about how she enjoyed watching the dolls come to life on the show as the filmmakers animated their arms and legs and talked for them. She liked how real it all looked, as if her Barbie dolls had truly come alive to star in their own reality shows. When I inquired as to whether she prefers to watch these videos or play with her own dolls, she replied, "both!"

For Katie, it seems that the videos enhance her real-world play by introducing new scenarios and inspiring her to play with her toys in ways she had never thought of before. For example, after watching an episode in which a YouTuber created and later opened a "surprise egg" with a small toy inside, my girls asked to use our stash of plastic Easter eggs to create their own surprise eggs to exchange with one another.

Parents who are concerned about the quality of the screen time their kids consume may wonder if there are any benefits at all to videos that feature adults playing with toys. Other than showing kids how to play with the toys they have in innovative ways, do videos such as these have any other advantages? When I asked the creators of DCTC this question, they freely admitted that the major draw for kids is the entertainment value of the videos they create, but as parents themselves with experience and training in child development, they do feel as if kids benefit in other ways:

"Beyond that, there are language and social skills to be gained, and if children "play along" with our videos (many parents tell us they do) then there are fine and gross motor skills to be developed as well. One cool by-product of this is that we hear from kids and parents all over the world who say that they are learning better English by watching our videos!"


What Are the Downsides?

Watching toy videos has been a positive experience for my girls. It has inspired many giggles, many conversations with one another, and many creative play sessions with their own toys, but one downside I've had to deal with as a mom is the substantially larger number of requests for new toys. Though definitely frustrating, even this has presented some teachable moments for me to talk to the kids about spending and saving. Another issue parents may encounter is the amount of time their kids are spending on YouTube as well other content they may come across on the online video platform. Having solid parental control software installed on your child's computer and setting clear screen time limits can help ensure that kids are enjoying these type videos safely and in moderation. Even then, though, there may be other issues to address. For instance, DCTC expressed concern over some of the advertisements that YouTube runs:

"One important thing that we want parents to know is that we have no control over the advertisements that run on our videos. The ads that viewers see are based on the YouTube account owner's demographic information. However, account owners can control this by going into their settings. "


Their suggestion? Instead of allowing your children to use your personal YouTube channel for viewing purposes, create their own and adjust the settings to ensure they're receiving only kid-friendly content.

After talking one-on-one with the folks at DCTC and viewing their videos myself, I'm definitely okay with allowing my children to subscribe to their channel. After all, adults have been creating media for kids for decades, so although it may appear strange at first, it really isn't much different. Plus, these particular YouTubers seem to be conscious of their potential impact on children and aware of their position as role models, often telling kids to make sure they complete their homework, go outside and run around, and not to watch too many videos. They're also working hard to be responsible about any unintended consequences their videos may have on kids, making sure to refer to girl dolls and characters as not just "pretty" but "strong" and "smart" as well. Having said that, I don't think it's safe to assume all YouTubers shoulder this level of responsibility. I recommend parents thoroughly review a channel's content before giving their kids the go-ahead to view its videos.

How do you feel about kids watching adults play with toys online?

Melissa Maypole is head of CSR for Qustodio, a parental control solution that helps parents set limits for kids' screen time, filter content, monitor activity from anywhere, locate their kids on a map, and more. It works on Mac, Windows, iOS, Android and Kindle. Qustodio is headquartered in Barcelona,Spain and can be found online: www.Qustodio.com.