U.S.
U.K. España France Ελλάδα (Greece) Italia 日本 (Japan) 한국 (Korea)
CLOSE
Coronavirus News U.S. News World News Business Environment Health Social Justice
Politics Joe Biden Congress Extremism
Entertainment Culture & Arts Media Celebrity TV & Film
Life Style & Beauty Food & Drink Parenting Travel Wellness Relationships Money Home & Living Work/Life Shopping
Communities Queer Voices Women Black Voices Latino Voices Asian Voices
Special Projects Highline
HuffPost Personal Video Horoscopes
From Our Partners Back In The Day Work It Don't Sweat It Room for Everyone It's Up To Us
Newsletters
International Australia Brazil Canada España France Ελλάδα (Greece) India Italia 日本 (Japan) 한국 (Korea) Quebec U.K. U.S.
Follow us
Terms | Privacy Policy
Part of HuffPost Women. ©2021 BuzzFeed, Inc. All rights reserved.
BREAKING NEWS
Tap here to turn on desktop notifications to get the news sent straight to you.
Sometimes, the easiest way to get a profound point across is to paint a picture. Daisy Bernard, a London-based fashion illustrator and writer has done just that with a series of illustrations that demonstrate the everyday mixed messages women receive when it comes to how they look and how they act.
In the illustrations, first posted to the UK website The Tab last month, Bernard outlines the way women are judged in the workplace, in relationships and sex, and on their appearance. In an illustration on sexuality, the image of a woman who on one side is wearing a low cut top and short-shorts and on the other side is wearing a long-sleeved, over-the-knee-length dressed is accompanied by mixed messages. These include: “You’re frigid,” vs “You’re a slut,” and “Show off your assets” vs “Leave something to the imagination.”

One of the reasons why we need feminism #everydaysexism #feminism

Bernard says she was inspired to create the series after news of a Muslim woman in France being forced to remove clothes on a beach by police because she was wearing a “burkini” came out on August 24. “It made me realize it’s more than just clothing that women are policed on,” Bernard told the Huffington Post. “None of these things are particularly unusual or outrageous, they’re things that unfortunately most women are all too familiar with.”
Bernard says that these double standards that women face need to be called out because of that familiarity. “It’s stuff that we often dismiss because it’s just ‘the way of life’ - which it really shouldn’t be.”
Check out the rest of the illustrations below:
Download
Calling all HuffPost superfans!
Sign up for membership to become a founding member and help shape HuffPost's next chapter
Join HuffPost 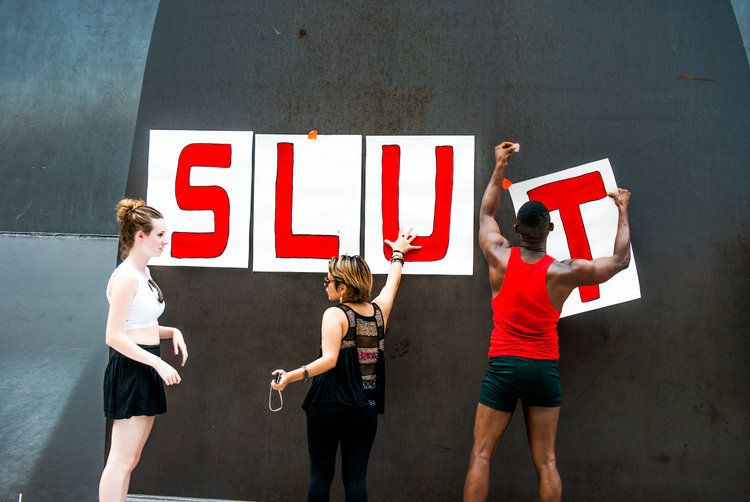