Some do it to check off a bucket list item, while others have ambitious personal records to achieve.

But for five runners racing in the New York City Marathon on Sunday, tackling the athletic feat is so much bigger than the physical fitness required to get through the five-borough course.

These racers are running for loved ones they’ve lost, those who are suffering from compromising conditions and complete strangers who need a boost.

If you can’t personally cheer them on from the sidelines, read their stories and consider supporting their missions.

Theresa Giammona had big plans for her husband’s 40th birthday on Sept. 11, 2001. Lt. Vincent Giammona was particularly looking forward to this milestone since he had been rigorously training for the upcoming New York City Marathon.

But those plans, and all the other exciting life events the parents of four had been looking forward to, never came to be.

Giammona had worked a 24-hour shift on Sept. 10 and was actually off duty when the World Trade Center was attacked. Still, the committed firefighter hit the scene as a volunteer with his fellow brothers from Engine 24 and Ladder 5 and lost his life that day.

To honor her husband’s sacrifice, his passion for running and the organizations that have stepped in to help, Theresa is running the New York City Marathon on Sunday. She’s raising money for the New York Police Department and the New York Police & Fire Widows' and Children’s Benefit Fund, a group that provides financial and emotional support to the families of police officers, firefighters and EMS personnel killed in the line of duty.

"They are family," Theresa wrote of the organization.

Learn more about Theresa Giammona’s story and how you can support her fundraising efforts here.

Robbie Twible’s condition is so severe that he takes pain medication just to endure taking a bath.

The 13-year-old has epidermolysis bullosa, a rare disease that causes the skin to tear apart, blister and sheer off, which leads to extreme pain and disfigurement. People with EB often describe it as feeling like their bodies are “always on fire.”

But because EB affects only 30,000 people in the U.S., funding for research is limited and relies on contributions from individuals and corporations. That’s why Kathleen Twible is devoting her marathon on Sunday to her teenage son and to raising money for the EB Research Partnership, a nonprofit that supports research aimed at treating and curing the disease.

Twible just wants her son to be able to lead a “normal” life, where he can get into bed without being carried and doesn’t have to worry about his esophagus filling up with blisters.

“EB has taken so much of his body, but will never take his spirit and his smile,” Twible wrote of her son. “It is that spirit and smile that will get me through 26.2 miles.”

Learn more about epidermolysis bullosa, and how you can help Robbie fight the disease, here.

For most, just getting through 26.2 miles is enough of a challenge. But not so for David Babcock, a dexterous advocate who plans on knitting flowers with his bare hands throughout the marathon on Sunday to support people with Alzheimer’s disease.

Alzheimer’s, the most common form of dementia, affects memory, thinking and behavior, and worsens over time. Flowers are used among the Alzheimer’s community to honor people who have died from the disease.

Babcock, 43, has been perfecting his multitasking skill for a while, and already holds the Guinness World Record for knitting the longest scarf while running a marathon, the New York Daily News Reported.

On Sunday, the handy athlete will be switching up his hobby a bit by knitting with nothing but his fingers, since security restrictions prevent racers from running with sharp objects. And, he’ll be committing his race to the Alzheimer’s Association, a group that supports research, provides services through its local chapters and engages in policy work.

Learn more about David Babcock’s mission and how you can support the Alzheimer’s Association here.

Kevin Parks has experienced an unfathomable amount of trauma, but it was the ensuing support he received that continues to shape who he is.

Parks' father was one of 658 Cantor Fitzgerald employees who died on Sept. 11. Soon after, Parks became involved with Tuesday’s Children, a nonprofit that supports kids affected by the Sept. 11 attacks, as well as children all over the world who have been impacted by terrorism.

While racing for Tuesday's Children in Boston in 2013, Parks witnessed the twin bombings, which inevitably brought him back to the fateful day his father was killed, he told The Huffington Post.

But the event also reminded him of the enduring goodness that informs his work today.

"If there is any silver lining, it is the unbelievable support you receive from people in times like that," he told HuffPost in 2013.

This year, Parks is racing in the New York City Marathon to again support Tuesday’s Children, for whom he’s raised nearly $150,000 throughout his years of campaigning.

Melanie loves singing and dancing, and particularly enjoys sharing those hobbies with friends.

Thanks to her involvement with Best Buddies, a nonprofit that helps people with intellectual disabilities foster friendships, pursue job opportunities and live independently, Melanie has been able to create a network of such friends. Melanie grew that circle when she took advantage of the group's "Life" program at George Mason University in Virginia.

But now that Melanie is getting older, she's beginning to "age out" of a system that has vast programming for young people with intellectual disabilities, but lacks in opportunities for older people like Melanie, her sister, Julianne Bowe, explained on her fundraising page.

To help support her best friend who served as her maid of honor at her wedding, Bowe is racing in the New York City Marathon and raising funds for Best Buddies. Her goal is to help the nonprofit expand its adult programming and to increase its capacity so that it can open up its wait list to more participants.

Learn more about Best Buddies and how you can get involved in supporting Julianne Bowe's effort for the organization here.

PHOTO GALLERY
Photos From The 2015 Boston Marathon
Download
Calling all HuffPost superfans!
Sign up for membership to become a founding member and help shape HuffPost's next chapter
Join HuffPost 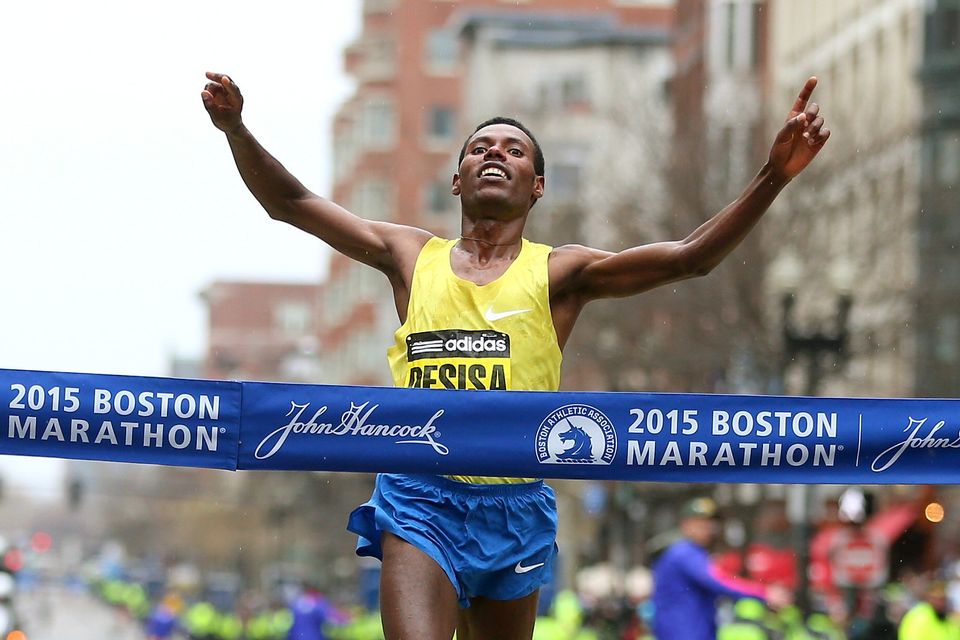