I cannot hide my passion for rodents. I find that they make lovable pets, at the same time smart and affectionate. My gerbils travelled the world with me (they followed me from one continent to another! And they are as happy as Larry!), make for great companions and are an integral part of my family. However, for how fond of rodents I can be, before hearing about the APOPO organisation, I could have never guessed that they can also be real heroes, and for more than one reason. Let's see how.

Amongst the many problems the modern world is facing today, landmines and tuberculosis (TB) might be less evident to many of us than for example climate change or HIV. This does not mean that they are less alarming or that we should care less. Even though landmines and TB might seem unrelated issues, the solution for both is unexpectedly common, and it involves the use of the African giant pouched rats, nicknamed HeroRATs, as efficient detectors. 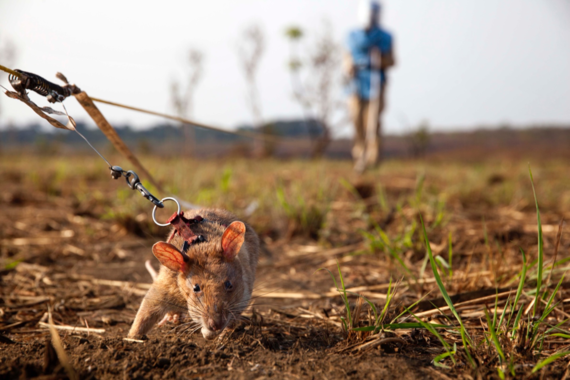 Landmines are devices used during wars as underground explosives, set to detonate by pressure when the enemy passes over them. When the war is over, landmines that have not exploded are abandoned in the grounds, rendering the area uninhabitable. It is estimated that only about 3% of the lands that is considered off-limits contains, in fact, landmines. However, nearby communities are too scared to use it and are segregated in smaller territories that do not offer enough resources for their development. Today, there are still 57 states and other 4 areas in the world contaminated with these devices. Furthermore, accidents caused by landmines are estimated to be almost 3000 per year, 80% of which involve innocent people (46% of these are children). Detection of unexploded landmines is, at present, an expensive and lengthy process.

TB is an infectious illness that currently kills 1,5 million people per year, 95% of whom live in developing countries. Although a cure exists for the disease, without proper treatment, up to two-thirds of infected people die. Detection is, therefore, of paramount importance, even more if we consider that each untreated carrier can infect up to 15 other individuals in a year. At present, TB is detected by sputum smear microscopy, a test that is at the same time slow and fails to identify a good number of less infectious forms of TB (missing between 20 to 80% of positives).

APOPO is a not-for-profit Belgian organisation, whose training and research centre is based in Tanzania (you can follow their progress on twitter and facebook). Their aim is to train the giant HeroRATs to become effective detectors of either landmines or tuberculosis. The technology they use relies on the rats' remarkable sense of smell; it is cheaper than current methods, and above all it is faster. Among the advantages in using the HeroRATs are the fact that they are intelligent, easily trainable, they are too light to set off a landmine, they live long lives (up to 8 years). They are also locally sourced, hence used to the climate conditions in which detection is generally carried out (mainly Sub-Saharan African climate).
The HeroRATs are able to recognise TB in samples of sputum and TNT explosive in landmines. With their fantastic work, the people and rats of APOPO are operative in Mozambique, Angola and Cambodia for landmines work and Tanzania and Mozambique for TB-related work. 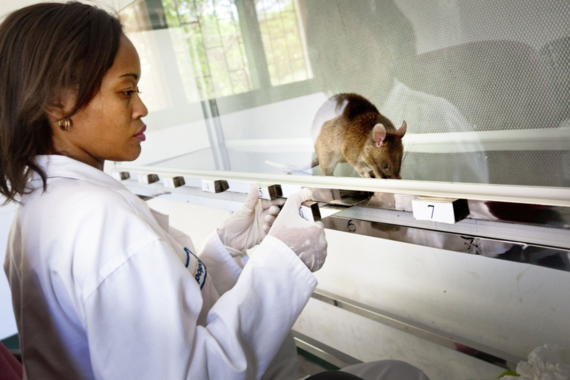 With the help of public donations, they hope to be able to export their technology to other countries in need. In their plans, there is also the hope of being able to keep researching other possible applications for which the HeroRATs could be used thanks to their reliable and sensitive scent detection ability (for example their potential use in the detection of salmonella or contraband tobacco).

Until now, APOPO has destroyed almost 70000 landmines by clearing an area of 26 millions of square metres and allowed almost 1 million people to return to their lands. It has done so within budget and on schedule. For what concerns TB, the APOPO team is today able to screen around 600 sputum samples per day, while 36 local clinics would take an entire week to go through only 1500 samples. Furthermore, the HeroRATs helped increase the detection of patients with tuberculosis by 45% in the clinics in which they were used (this resulted in the identification of further 9000 TB infected patients, which had been otherwise missed by conventional analysis methods). 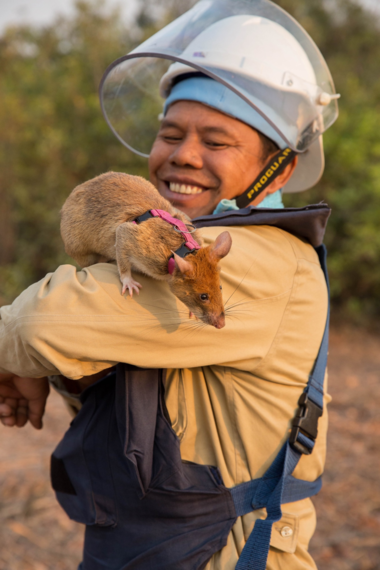 I am deeply fascinated by this project and the effort put by APOPO in trying to solve fundamental societal issues. I am also positively impressed by their thorough scientific research and the respect they show in the handling and training of their rodents: they (the rats) even get sunscreen on their ears and tails to protect them from the harsh sun (it is worth consulting the animal welfare section in their FAQ page!). I would encourage everyone to read more about APOPO's achievement through the stories of people, like Lulu and Abu, whose lives were changed thanks to the help of these little/giant heroes and the people supporting their training and the development of this unique and successful project.

I would like to thank the APOPO organisation and in particular Lily Shallom for providing pictures and information: a fundamental help for the writing up of this piece. And, a special thank you to the photographer, Briana Marie, for the beautiful picture of the Cambodian man with a rat on his arm.

Scientist, writer and actress (at times)