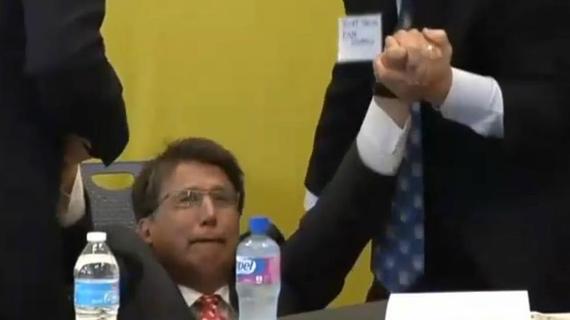 Embattled North Carolina Governor Pat McCrory recently missed his chair and got paddled by the floor. Although we all make mistakes (I've had some floor paddlings myself), not Governor McCrory. He blamed it on the chair: "These things got wheels on them!" I'd submit this blunder and blame shifting is typical McCrory (except the pain this time was his alone). By now, it almost seems standard procedure. McCrory makes a mistake and then he directs the blame elsewhere. Pat blames a patsy. Let me give three more examples of what I mean.

First, we all of course know about HB 2. McCrory claims that this bill and all the damage it is now inflicting on North Carolina is someone else's fault. His patsies include the city of Charlotte and those who would "slander" North Carolina (whoever in the world that might truly be). However, with better aim of his arm than of his rear, he quickly signed that bill. He therefore assured its swiftest passage. Because of that signature, there is now no state cause of action for religious or other discrimination in North Carolina not to mention all the other damage done by that bill. Despite his claims to the contrary, this was Pat's act and not some patsy's. His signature made HB 2 law.

Second, McCrory has refused Obamacare's expansion of Medicaid in North Carolina. This has cost the state dearly in terms of dollars lost not to mention the human suffering that comes from lack of medical care. Perhaps in his strangest patsy move of all, he has actually blamed that failure on President Obama. See here. Of course, as we all know, Pat's decision was Pat's decision and not some patsy's. (McCrory presumably has another patsy here as well: the poor themselves. However, since I've already written about that red herring, I'll not address that further but refer the interested reader here and here.)

Finally, I'd like to give a patsy McCrory example that many outside the currently-affected area may not know about. McCrory's administration is pushing full speed ahead with a toll road project that would be unbelievable were it not true. Unfortunately, the incredible here is all too true. It also isn't something that the rest of the country can ignore at a safe distance. It's an example of what those like McCrory would foist on the rest of us if we let them. So far, McCrory is letting the project proceed despite overwhelming local disapproval. What is this project of which I speak? Briefly, and as best I can sort it out, it involves a contract with a Spanish company to add toll lanes to a critical roadway, I-77 which connects Charlotte with quickly growing and frankly wonderful areas North of Charlotte including Lake Norman. Under the terms of the contract (which will last for 50 years), the State is handing over to the Spanish company some HOV lanes in each direction that the state built and paid for and the Spanish company is building (with financial assistance from North Carolina and a federally-backed loan) additional lanes in each direction. The Spanish company will then be able to charge variable so-called "market-rate" tolls on "its" lanes. Those varying tolls will somehow be determined based on current traffic. Drivers thus won't know from time to time just how much those tolls will be. If all that doesn't sound crazy enough, North Carolina has guaranteed minimum sums to the Spanish company and has further agreed not to build competing lanes for the fifty year period. For those wishing more details than I can give here, a good place to start is here. Also, if I have gotten any of this tangled mess wrong despite my best efforts, I'm of course happy to correct it. Of course, McCrory refuses to budge on the contract since he unsurprisingly maintains that this (like so much else under his watch) is not his fault. Since McCrory won't help, pending litigation seems the only hope at this point. (It also seems the only hope of understanding what if anything else is going on beneath the surface here. I hope the lawyers are engaged in vigorous discovery.)

I have elsewhere discussed a favorite McCrory form of political dissembling which I have called the "McCrory." See here. I suggest we give this shifting of blame a name as well. Let's call it the "Patsy." That seems logical to me: there's a Pat in McCrory and "Patsy" both.