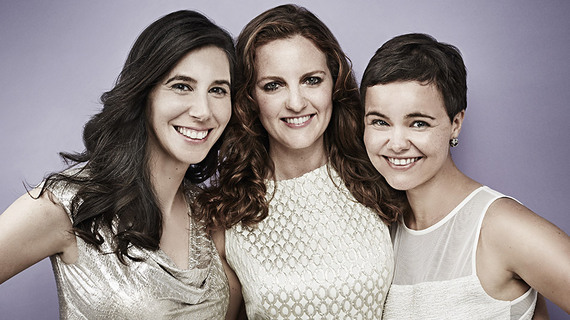 Four of her friends, who didn't know each other at the time, came over to her place in L.A., and sat around a table. Together, the strangers broke bread, and began sharing their experiences with loss.

All had recently lost a parent.

Today, that gathering has grown into a non-profit called The Dinner Party.

"We want to tackle widespread cultural taboos," say Fernandez, and her partners Lennon Flowers, and Dara Kosberg. "We foresee... a day in which young people who have experienced loss are recognized not as objects of pity, but as better listeners and better leaders, characterized by profound empathy, resilience, and agency."

I recently asked Dinner Party co-founder Lennon Flowers about her involvement, and what the future holds for the company.

Could you share with us the genesis story of the Dinner Party? How did it happen?

It happened by accident.

Then, three years later, I moved from DC to LA for a boyfriend and a job, and met Carla (Fernandez). We'd been working together for a few months and were walking back from coffee one day when she mentioned her dad had died six months before.

We now talk a lot about "deer-in-headlights syndrome:" A sudden freeze in conversation when we mention those parts of our stories, followed by the pity-face.

You were familiar with the pity-face.

In the course of my mom's illness and in the years since, I'd become hyper-aware of the way in which my story made other people uncomfortable, so I learned to avoid it, or otherwise to redirect a conversation. Our conversation as Carla and I walked back to the office that day was my first experience of loss as a conversation-starter, rather than a conversation-killer.

That fall, Carla invited a handful of women she'd met who'd all lost parents over for dinner one Sunday night. I still remember the, "Oh f*ck, do I really want to do this?" feeling as I knocked on her door that night.

What did you eat?

She'd cooked up a big vat of her dad's paella, and had strung Christmas lights on her back deck. We uncorked a few bottles of wine, and voila.

There was common ground.

All of our stories were different, as was the timeline: for one woman, it had been just a few months, for another, six years. But we quickly found we had a lot to talk about.

We talked until 2am, and kept getting together.

How did you know this could be about more than just a few friends gathering privately?

I spent a summer back in D.C., and started hosting dinners with a couple of friends and friends-of-friends.

Then a therapist in the Bay connected us to a couple of women who started hosting Dinner Parties out there.

The Dinner Party expanded, to other cities.

We realized that the very same experiences that had for all of us been sources of isolation, had suddenly become sources of really powerful connection and community. Carla and I had done some work through our old company with Dara Kosberg, who was based in San Francisco and had also lost her mom.

The three of us began to strategize about what this could look like at a national level, and to articulate a bigger vision about changing the way we look at life after loss.

In December 2013, with the help of an Indiegogo campaign, we opened our doors.

Why do you do this work?

It helped to create the community I wanted to be a part of. In terms of relationships, and a sense of meaning and purpose--the kinds of currency I really give a damn about--it's enriched my life in ways that I could never have imagined.

The other reason is the same, I suspect, as it is for every other problem-solver: dissatisfaction with the status quo and a hunger to tap untapped potential. We're seeing this move away from institutions and toward more peer-driven platforms in every aspect of our lives: from peer-lending circles, to car-sharing, to Airbnb.

The people who arrive at our tables aren't looking for counsel, or to be fixed. They're looking for the same thing we were with that first dinner: for community, and the chance to share the vulnerable, messy parts of ourselves and our stories that we normally hide. We want to make that easier to do, in environments that don't suck.

How many cities are you in now?

30. Altogether, we currently have 80 tables, powered by more than 100 hosts across the country, and a few internationally.

And in the future?

Our goal is to do to life after loss what AA did to alcohol, and to create more peer-driven spaces where humans can be human. We're doing that by building a community of trained hosts, and sharing tips and practices with anyone who wants to host a dinner among people they know.

In your manifesto, you talk about 'moving forward' as being different from 'moving on.' How so?

There's a W.S. Merwin poem called "Separation" that nails it for me:

"Your absence has gone through me / Like thread through a needle / Everything I do is stitched with its color."

When I sat down for my first dinner, I no longer identified as "grieving" in the traditional sense, and had long since adjusted to a new normal. Yet my life was profoundly shaped both by who my mother was, and the fact that she had died.

At the time, I didn't have language, let alone spaces, in which to reflect on that.

We fear that by talking about the people we've lost, or about the ways in which that experience has changed us, we'll get stuck in a narrative of loss. We're not interested in grieving forever. But we think that by naming those experiences, it actually allows us to make room for other things too.

What do you know for sure about life after loss?

I know very little for sure. But I can definitively say that it's different for every person: We are each our own best expert, and the only roadmap that matters is the one you choose to create.

*And on a personal note, I recently wrote this piece, about losing my mother.