Age has never been an obstacle for 16-year-old Thessalonika Arzu-Embry. After all, she's already got her master's degree.

The North Chicago-area teen started homeschool at age 4, the Daily Herald reports. She began making an impact on others soon after.

“Since I was 6 years old, I was an inspirational speaker at an organization called Tabitha House Community Service, a transitional housing for people who were displaced due to various situations such as natural disasters, abuse and violence,” she said in an email to The Huffington Post.

At 11, she graduated high school and then earned her bachelor’s degree in psychology in 2013. She completed classes online as she was traveling for church events and leadership conferences. Now armed with her master’s, Thessalonika hopes to help businesses learn how to prepare for upcoming trends and changes. 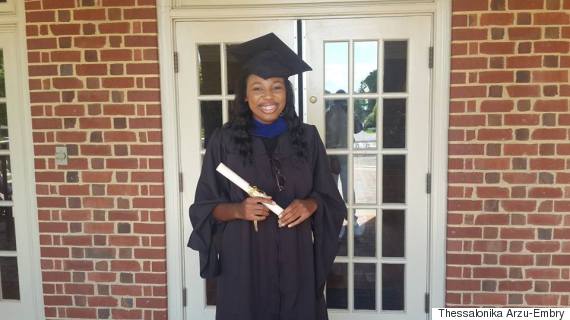 She isn’t finished there, though. The teen plans on focusing on aviation psychology for her doctoral studies, a decision inspired by her father who is a private pilot and military veteran. He is now a manager at O’Hare International Airport. "I grew up around airplanes," she said. "We took flights all the time."

What exactly can Thessalonika do with aviation psychology? Her goal is to use it to determine whether pilots are dealing with issues that could have fatal consequences once the plane takes off -- a topic that has been in the news lately. For her, it's a mix of two of her interests: business and psychology.

In her free time (yes, she actually has it), Thessalonika enjoys playing tennis, swimming and being active in her youth group at church. She also has three self-published books out, which are available on her site. "Jump the Education Barrier" was written to help students finish college, and "In the Future" aims to help business owners with trends. Her third book, "The Genius Race," has a wider appeal. Thessalonika said it's designed to help people "be geniuses in various areas of life."

We think she'd certainly have some tips about that.