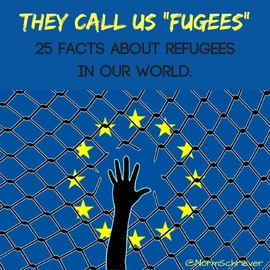 In September of 2015, a tragic image of a young Syrian boy named Aylan who had drowned on a Turkish beach echoed around the globe, tugging on the heartstrings of the international community and raising renewed outcry over the refugee crisis. Only 3 years old and fleeing his native Damascus with the rest of his family, who all perished at sea that day as well except for his father, Aylan was just one of the countless thousands of refugees that attempted to cross the Mediterranean in an attempt to find safe haven on European shores. Perhaps this one image did more to humanize the plight of Syrian refugees than all the news articles and media reports that came before it, but the reality is that people also need accurate facts to truly understand the magnitude of the refugee crisis -- and become inspired and mobilized to help. Here are 25 facts about refugees and displaced persons around the world and the Syrian refugee crisis: 1. A refugee is a person who has left the country where they live and can't return because of fear of persecution due to their religion, political beliefs, race or ethnic group, or affiliation with a certain organization. (Source) A Displaced Person is someone forced to leave their home due to armed conflict, violence or other human rights violations. It may also be a natural disaster or lack of food, drinking water or their livelihood that forces them to flee. (Source) 2. Currently, 65.3 million men, women and children around the world have been forcibly displaced, the highest levels on record. (Source) 3. That includes 21.3 million refugees that have been displaced or fled their own countries, now seeking amnesty, shelter or safe haven in nations other than their own. (Source) 4. That adds up to about 1 in every 100 people in the entire world displaced from their homes, the highest ratio since 1951. If all of those refugees formed their own country, it would be the 22th largest in the world by population, larger than even the United Kingdom, Italy, Spain, South Africa or South Korea. (Source) 5. Only 12 months ago we had 59.5 million refugees and displaced people in the world, representing a huge increase of 5.8 million people in just one year. (Source)

6. In 2015, an average of 24 people fled or were forced from their homes every 60 seconds, a fourfold increase from ten years ago when only one person on average became a refugee every minute. (Source) 7. Every day about 34,000 people are forcibly displaced due to conflict or persecution. (Source)

8. The rise in child refugees has been alarming, with 2015 marking the first year that 51 percent of the world's refugees were minors. (Source) 9. 53% of the world's refugees come from just three countries: Syria, Afghanistan and Somalia. (Source) 10. Syria now has the most profound refugee problem in the world due to their brutal civil war. In fact, 4.8 million Syrians are refugees, and 6.5 million more Syrians are displaced within their country. It's estimated that about half of those affected are children. (Source)

Add it all up and and about six out of every ten Syrians have been displaced from their homes, a magnitude not seen in any other country in recent history. (Source) 11. Where do all of these refugees go? About 80% of the world's refugees are located in developing countries, not wealthy or western nations. (Source) 12. In fact, more than 4.5 million Syrian refugees are now in just five countries: Turkey, Lebanon, Jordan, Iraq and Egypt. (Source) Turkey hosts 2.5 million Syrian refugees, more than any other country in the world. Lebanon hosts about 1.1 million Syrian refugees, which means that approximately 1 in every 5 people in Lebanon are now Syrian refugees. (Source) The 635,324 Syrian refugees in Jordan make up 10% of that country's entire population. (Source) 13. Neighboring Gulf countries like Qatar, United Arab Emirates, Saudi Arabia, Kuwait, and Bahrain still offer no resettlement opportunities for Syrian refugees. (Source) 14. Even wealthy nations like Russia, Japan, Singapore and South Korea have offered no resettlement places for Syria's refugees. (Source) 15. A little more than 10 percent of all Syrian refugees have fled to Europe. (Source) 16. In 2015 alone EU countries, with the addition of Norway and Switzerland, were host to 1.3 million refugees. (Source) 17. Out of all European Union countries, Germany leads the way with accepting Syrian refugees. In fact, Germany has pledged admission for 39,987 Syrian refugees, which is about 54% of the EU total. (Source) 18. From 2012 to the close of 2015, the United States has accepted roughly 2,174 Syrian refugees, which is only about 0.0007% of the total U.S. population. (Source) 19. However, the Obama administration has pledged to take in 10,000 Syrian refugees in 2016 and accepted 2,300 in June alone, putting them on track to reach that goal. (Source) 20. In the Middle East about one-in-twenty people are now displaced, with Africa being the next highest region at one-in-sixty. (Source) 21. Child and minor refugees are often forced to fend for themselves. Of the total unaccompanied minors entering Europe between 2008 and 2015, 48 percent came in 2015, alone. (Source) 22. Children who become refugees often have to work just to survive, sometimes in demeaning or dangerous jobs. They also frequently face a high risk of sexual abuse or exploitation. Right now between two and three million Syrian children are unable to attend school because of that country's civil war. (Source) 23. Refugee children often become malnourished or fall ill because of a lack of basic food, clean water, sufficient shelter, warm clothing and medical care. (Source) 24. For instance, the most vulnerable Syrian refugees now resettled in Lebanon receive just $21.60 per person every month for food, or around $0.70 each day, well below the United Nation's designated poverty line of $1.90 per day. (Source) 25. International relief organizations are scrambling to help, but it's still not enough to provide the basic necessities for these millions of refugees, and complications with delivering the aid magnify the problem. For instance, the United Nations 2015 humanitarian appeal for funds to assist Syrian refugees was only 61% funded by the end of 2015. (Source) *** If you'd like more information about the refugee crisis or how you can help, visit the United Nations Refugee Agency page or email me any time.