Today marks the second death anniversary of Mustafa who died in an assassination attempt on me. The incident took place in Lahore where 72 people died yesterday in a suicide bombing. My mourning continues...
-
On the 28th of March, 2014, I lost a close associate, an employee, and a friend. After I miraculously escaped a carefully planned dénouement, there was much to celebrate: the chance to live, the experience of having defied death. But this living has come with a death at its very center.

Young Mustafa, who had still to experience life, was deprived of that. What can it be called? An accident? An assassination? Crossfire? Or the sheer randomness of death? In 2008, on returning to Pakistan after a stint with the Asian Development Bank, I hired Mustafa. I was a little hesitant to hire someone so young but during the various tests, he proved to be a responsible driver and immediately endeared himself to my family, including my young children, who later became his friends.

Mustafa, a resident of Kasur, was the eldest child of a landless, working-class family. They had to stock wheat after every harvest lived in a house that sustained damage after every monsoon, and faced the brutal marginalization of being who they were in the essentially classist rural society of Punjab.

Mustafa's venturing out to the city, therefore, added a bit of pride in addition to financial support for the family. He was choosing not to be a manual labourer, but opting instead for better-paid "high"-skill-based employment. I found out about all these nuances as we spoke about his village and the dynamics therein. Within a year of working for us, Mustafa's ailing father, paralysed after an accident, passed away. This made him even more worried about his family and the frequency of his visits to the village increased. His mother was next: after a year or so, she too died. Here was a twenty-something responsible for the household and his young siblings. Before she passed away, his mother had arranged his marriage to a distant cousin. It was a marriage of his choice as well: he had known his young wife-to-be since childhood.

His village dargah of a local saint and Kasur's famous shrine of Bulleh Shah were the two centres at which annual rituals were performed and I too contributed to the ceremonies. There was a rock-solid belief in peaceful, non-violent ideas that the Sufi legacy continues to inspire among so many people in Pakistan. It is not a coincidence that those who consider Sufi shrines spaces for infidels (and their ilk actually bomb them) reportedly killed him. Mustafa, too, albeit indirectly, was a victim of that ideology.

All these years, Mustafa was not an ordinary employee. He was more than a family member a playmate of my children, an administrative associate who helped me negotiate two cities, two homes, multiple careers and travels. He knew where my papers were and where my bills, forms and the entire daily grind was located. He was an ever-smiling, gentle shadow over my logistical existence. More than that, he was emotionally supportive in his own way. If I had yelled on the phone, he would bring me a glass of water. If I had not gone for my daily walk, he would remind me to. He would buy me snacks - corn on the cob, bananas, jamuns and yogurt - between multiple appointments so that I could eat. So we were friends - as far as the hierarchy could allow. I trusted him more than many I knew. 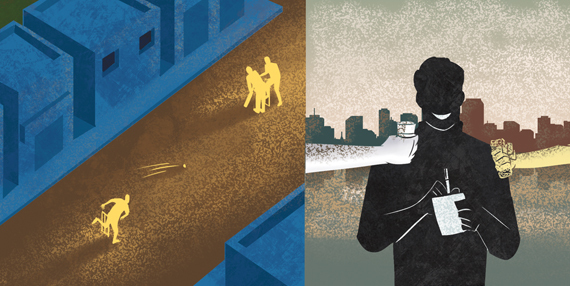 He was also my companion when I visited Sufi shrines as a regular feature of my Lahore life. Even on the night of 28 March 2014, we had planned a trip to Data Darbar. It was a special Friday night and it was he who had reminded me that day. He had, despite my protests, displayed a poster of the saints on the back window of the car. He shared my enthusiasm for discovering old buildings, for random signs, rickshaw posters and other forms of pop art. He would slow down and ask me to take a picture of an outlandish advert or a painting on a truck. But he was taken away.

A part of me, too, has died. I live with a haunting, gnawing hole in my being. There is not a day that his face does not appear while I am awake or asleep.

This is accentuated by my being away from home, being afraid to risk another tragedy. More than my mortality, I am now obsessed with the idea that someone else might get hurt or even receive a minor injury on my account. Why I threw conformity to the winds and whether it was all it is worth, is something I need to figure out.

After I had left, the police arrested the alleged gunmen and Mustafa's family had to undergo another ordeal: threats, pressure, and inducements. We remained in touch but I let them decide what they deemed best. I could neither insist on them giving false evidence, nor stop them, for the entire system of justice is the stuff of Greek tragedies. And the most recent jolt. Mustafa's younger brother was arrested last week by the police as a "suspect" in a local case of dacoity. They took him to the police station and tortured him for a night. A police official who lives in the area had apparently decided to teach them a lesson for not acting like the landless peasants they are.

For the poor of our country, there is simply no protection. The torture has left Mustafa's brother maimed. Medical care is poor in Kasur and so another transaction, another layer of exploitation - healthcare - has been added to the miseries of the family. I am a remote participant, sometimes effective and at other times not so useful. This is how it is.

A new report states that Pakistan has lost 80,000 people during the ongoing war on terrorism. Mustafa is a mere footnote in this sordid saga. I could have been a digit too. Human life and dignity, those meaningless, abstract terms one had learned, stand mocked and hung upside down where injustice prevails.

The masked gunmen who fired at my car and killed Mustafa are unrecognizable. If the ones in jail are hanged, will this be justice? Perhaps in that vengeful moment or in a limited sense. But thousands of Mustafas remain vulnerable at the hands of the same mind-set unless the state cuts the umbilical cord that gives the killers their strength, their impunity.

In the meantime, I mourn Mustafa, celebrate his short, beautiful life, and pray that his family remains safe. I also pray that I might get over the image of his dead body as I tried to pull him out from the bullet-riddled car amid a melee unwilling to help. One day, all this will change, I hope. But nothing will bring Mustafa back.
The text was first published in The Friday Times last year. CFX Comics illustrated it with these powerful graphics.

Delhi By Heart: Impressions of a Pakistani Traveller
by Raza Rumi