In the Arctic north of Norway, the beach at Gåshamna, Svalbard, is strewn with the debris of old whalers and the bigger-than-dinosaur bones of the great whales.

We pick our footing carefully around the wood and iron, around the shacks. We don't want to damage the ruins.

We walk around whale jawbones the size of building beams, skulls larger than people, improbable ribs and vertebrae the size of hassocks. We examine in fine detail the weathering of the skeletons, and comment on how the pretty lichens and Arctic flowers grow more densely where the bones have leached their nutrients to the soil.

But let's not kid ourselves: it's a garden of death. It is bleak poverty to pick through what others discarded centuries ago, when the now-silent bay should be full of whales. 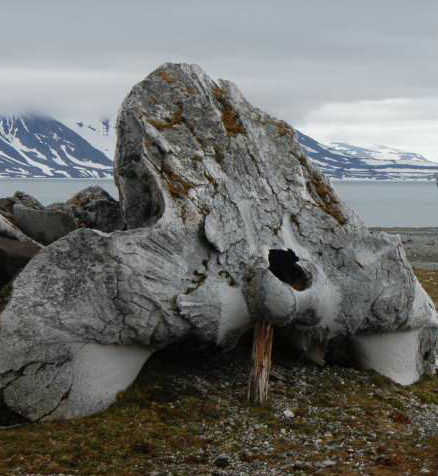 Imagine coming around a headland into a bay alive with leviathans. You can see that in the Baja bays where gray whales give birth and begin nursing their calves. And in Hawaii when humpbacks are singing and being born. And in the waters of Alaska, and various places off California and New England, when the whales are in. Whales have begun recovering in some places, and the waters again carry the noise of their blows and their detonating breaches.

Not here. Here, what Herman Melville in Moby-Dick called "so reckless a havoc," still resonates as mere silence and calm water. And in fact, these abandoned shacks are more thoroughly "protected" than remaining whales in Norway's waters, since Norway is one of the few countries still hunting whales in defiance of the global whaling ban. Iceland -- after getting hit hard by the 2009 global recession -- greatly expanded its commercial whaling, killing more than 100 fin whales in just '09. Worldwide, whalers kill about 1,500 whales annually, with Japan's whalemeat market providing most of the incentive. Numbers of most large whales worldwide remain depressed from earlier whaling.

There's no humane way to kill a whale. And at roughly 10 times the price of chicken, no one will starve if they don't eat whale meat.

But it is true that the whaling Japan, Norway and Iceland report is, probably, sustainable.

It is also true that whaling seems to entail a willingness to lie about how many and which species they've killed. Between 1948 and 1973, four Soviet factory ships processed 48,477 humpback whales and reported only 2,710 (humpbacks were supposedly protected by a global whaling ban in 1966). In 1993, an air cargo handler in Oslo, Norway, uncovered 3.5 tons of whale meat -- labeled as Norwegian shrimp -- bound for South Korea. DNA tests have proved that whale meat packaged and for sale in Japan often comes from species of whales and places in the ocean that are supposedly protected. The scientists who reported the DNA tests wrote,

These results demonstrate the inadequacy of the current system for verifying catch reports and trade records of commercial and scientific whaling... Without an adequate system for monitoring and verifying catches... no species of whale can be considered safe.

That's why the claims of sustainable whaling are always suspect. So can we kill whales sustainably? Apparently not.

Then should we kill more whales? No.

Most of these bones are from Bowheads, the whales most adapted to life in ice-water. The Bowhead has the most highly developed blubber layer among whales (a foot thick), and a complex blood circulatory mechanism for conserving heat. It's big, 15 feet at birth, up to 65 feet at adulthood, weighing 200,000 pounds. Its huge head, which makes up one-third of the animal's overall length, can smash through ice up to six feet thick. The fibrous filtering plates that hang in the mouth from the top jaw, called baleen, reach extreme lengths of 12 to 15 feet. With these the whale strains enough krill and fraction-of-an-inch-long copepods from the seawater to keep it swimming.

Bowheads ranged originally across most of the Canadian Arctic to Greenland, and from Greenland east across the Barents Sea to Novaya Zemlya, and off Alaska in the Bering, Chuckchi, and Beaufort Seas, west to Russia and the Sea of Okhotsk.

Whalers got into this region in the 1600s, where the slow-swimming Bowhead was called the Greenland right whale because it was the "right" one to find in these waters. Whalers killed something like 60,000 Northern right whales (a different species) farther south; the bowhead was just the next "right" one as the whale-hunters ventured into the high Arctic. Between 1630 and 1635 -- 1,825 days -- tens of thousands of bowheads lost their lives to humans.

Bowheads don't breed until age 25. They may have the greatest longevity of any mammal; they're known to live two centuries. In 1993, two stone harpoon points were found inside an Alaskan bowhead. It had been harpooned -- probably in the 1800s -- by hunters still living in the technological stone age. It was finally killed by industrial-age Eskimos. In chemical analyses of several Alaskan bowheads, the oldest whale was deemed 211 years old at the time of its death. That whale had been gliding through icy seas when Thomas Jefferson was president.

But now there are likely more of these great skulls on this one beach than there are in the heads of living Atlantic bowheads in the whole ocean. They're all-but-extinct.

The first global oil wells were called whales, and the drills were called harpoons. People then thought only of themselves and the short term, and within a century they ran out of oil and whale-meat. Even in the places where whales are again common, they're at a fraction of their former abundance. Whaling for oil has ended; good riddance. Every time we sever a source of dirty energy -- or immoral energy -- humanity improves.

The right and necessary things are not always decided solely on economic considerations. If ever energy came cheap, slavery was it. Slavery created jobs for slave-catchers, a shipping industry built on the slave trade, and a plantation economy that could remain profitable only with slave labor. Slavery was necessary to "stay competitive." It was the lynchpin of southern plantation economy. But no normal person today would argue that slavery is good for the economy. We've made at least that progress.

Yet we hear -- all the time -- arguments defending dirty energy on economic grounds. Those arguments are as morally bankrupt as the ones defending slavery in its heyday. It isn't moral to force coming generations to deal with the consequences of our fossil-fuel fantasy. It isn't moral to insist, in effect, on holding them captive to our present economy.

With the whales gone from here, we find the whaler's ruins and the bones interesting. We have come all this way and found not the waters roiled by spouts and blows, nor flagged by flukes. We got bones. They left us -- bones.

Among these ruins, I'd like to believe that we no longer think as the whalers did. They, after all, weren't thinking about those of us who'd be here centuries later. They were simply after what they wanted, whatever the consequences.