On three continents, in three times zones, the message was the same: Nuclear operators and their suppliers should be held fully responsible for a nuclear disaster.

The activities started in Japan, where Greenpeace activists demonstrated in front of the country's parliament with the message: 'They profit, you pay'. They were soon followed by protests in Germany, Belgium and France. In Canada, a blimp was floated above the city of Toronto.

Using a giant blimp, big stickers, photos, projected images and nuclear scream masks, activists have highlighted the unfairness of a system, detailed in Greenpeace International's report, "Fukushima Fallout," that leaves taxpayers on the hook for the costs of a nuclear disaster.

Almost two years since the March 11 earthquake and tsunami triggered the triple meltdown at the Fukushima nuclear plant, victims are still awaiting fair compensation from an industry that enjoys government protection.

Hundreds of thousands of victims, who fled their homes to escape the release of radiation from the crippled Fukushima plant, still live in limbo, unable to return home or rebuild their lives elsewhere.

Adding insult to the social injury of dislocation, hardship and the mounting 'atomic divorces' of families on the edge, the public is being forced to pay for the clean-up -- a clear failure of the law to hold the nuclear industry liable for its failures.

Governments set up this protection 60 years ago to help get the nuclear power industry off the ground. The Fukushima meltdowns highlight the need for change.

Ahead of the second anniversary of the disaster on Monday, Greenpeace is demanding that reactor operators and their suppliers, such as GE, Hitachi and Toshiba, be held fully responsible for potential nuclear accidents.

'Your Business, Our risk'

We have been talking with GE, Hitachi and Toshiba but they have avoided taking responsibility as suppliers, pointing instead to their existing Corporate Social Responsibility webpage or report, where they present their charitable activities in response to the earthquake and tsunami.

About 10 activists in Brussels carried our message to GE's European headquarters yesterday, emblazoning giant stickers on the office windows with the message: 'Fukushima: Your Business, Our Risk.'

Over in Germany, activists in Duisburg unfurled a banner at Hitachi Power's European HQ saying: 'Don't let Hitachi walk away from the Fukushima disaster.' And in France activists protested outside GE's Paris HQ.

That same message was delivered earlier this week in Jordan in the Middle East and also in Switzerland, where activists projected images of the Fukushima plant onto the Mühleberg plant to warn the Swiss public about the dangers of nuclear energy. 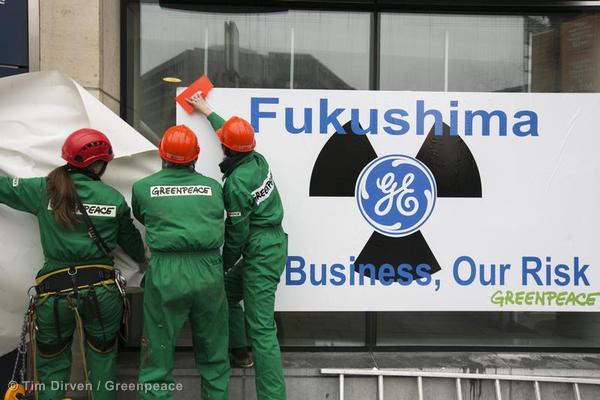 But TEPCO, the operator of the Fukushima plant, is only required to pay a fraction of the costs while supplier companies are not required to pay anything, effectively putting the burden on the taxpayer.

Today's activities in three continents, across several time zones, highlight that the lack of accountability of the nuclear industry is not only a problem limited to Japan. Global nuclear regulations are seriously flawed.

Big companies like GE, Hitachi and Toshiba should stop rejecting their moral responsibility to help people who have suffered from the radioactive contamination caused by their products. They should be made accountable for the risks they create.

You too can help, by signing the petition to call for urgent nuclear industry reform.