A hundred and twenty-two years ago, on Jan. 1, 1892, Ellis Island opened its doors and welcomed its first immigrant, Annie Moore of Ireland. As the first to arrive, Annie was briefly famous making headline news across the country and even overseas, but she quickly vanished until re-emerging decades later when the restoration of Ellis Island triggered a fresh round of curiosity about this immigrant pioneer.

Unfortunately, a curious confluence of events at the time led to the identification of an entirely different Annie Moore -- a woman born in Illinois -- as Ellis Island's first. This error was finally rectified in 2006 when the true Annie was discovered, but some misinformation persists, including the notion that she arrived on her 15th birthday. In reality, she was 17 and her birthday was in May, so not even close to January 1. 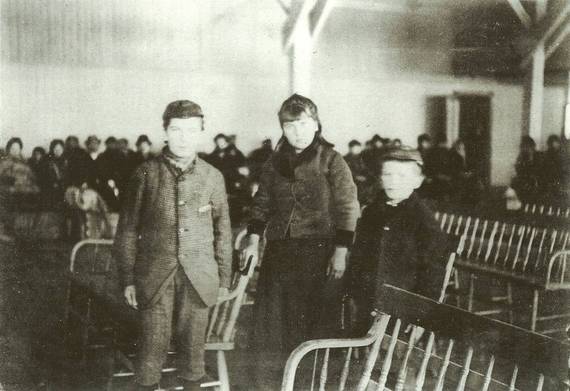 It's easy to spot the origin of this mistaken belief as newspaper accounts of the day touted the happy coincidence of the Irish lass arriving on her 15th birthday, and this article from the New York World is likely the one that started it. Supposedly based on an interview with Annie's father, Matt, it claimed that he hoped that she would arrive on January 1 since she "was born on New Year's Day, 1877." Of course, the article also mentions her brothers Joe and Tom, who were actually named Anthony and Philip, but why let accuracy get in the way of a good yarn? 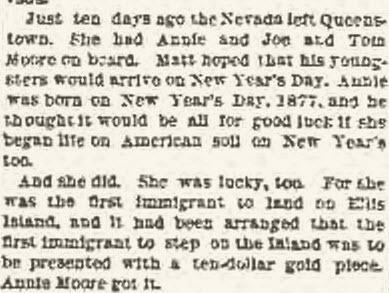 At the time of Annie's rediscovery in 2006, it required some effort to learn the truth, and it was Tim McCoy of Cork who invested some shoe leather to ferret out her Irish records to learn that Annie was born in May 1874, and not January 1877 as is so widely reported. Fast forward to today and it would have been far easier to figure this out as seen from this search result at FamilySearch.org.

And yet, in spite of the fact that this can now be found online in mere seconds at no cost, the myth persists. A search of "Annie Moore," coupled with "Ellis Island" and "birthday" or "15" turns up tens of thousands of hits no matter which engine one favors.

Poor Annie had to wait 114 years after she arrived to be correctly identified. Let's hope that 2014 is the year we finally get her age right!