You ask, "Why did they unfriend me?"

But it's okay. You will survive. It's not even a loss. If people choose to be in your life, in real life or on social media, they are your peeps. If not, let 'em go. They won't be there when you need them. When good stuff happens for you, they may smile but not truly celebrate it. It may feel blunt and very middle school-ish to be" unfriended" by a neighbor, relative, co-worker or friend/acquaintance. It's a power move. I-did-it-first type of thing. It's an aggressive move done in a passive-aggressive way for some and yet, it's nothing personal or malicious for others. Don't ask why they unfriended you. It's probably something you don't want to hear.

I did once message a Facebook friend who I made through my writing to ask why she unfriended me. She thought something was directed towards her. She misunderstood my intention behind a post I had made. We reconnected and it was fine. Would I do that now? No.

I've talked with many women who have been "unfriended" and they relayed how it made them feel bad. When I first started blogging a few years ago and really actually being myself, one friend who I really liked and had spent many good times at her house unfriended me. It hurt my feelings, but I realized she didn't value me and that was a dealbreaker for me anyway. I could have gone into how maybe I was wrong about a certain subject, too outspoken, too fierce in my self-love, or feel I had to change in order to be liked. Ugh! Never do that. I can see how it seemed that overnight on social media I had become a selfie queen who posted a lot and was probably speaking in almost a different language to her. It was so liberating to be myself even if everyone didn't like that version.

Just recently I was unfriended by a woman I had done podcasts with a few years ago. She sent me a message that she didn't feel any connection to me anymore and we probably shouldn't be friends on Facebook or even catch up via phone. I was taken aback. I still love her though. I actually like the diversity of friends I have. I like that not all are married, have kids, live in the U.S., are in their 30s, or any of the things that make up me. I have unfriended Facebook friends I never interacted with to make room for other people if they posted really negative things or haven't posted a thing in three years. Maybe it seems I'm being hypocritical, but these people I didn't actually know, but rather just over the internet and I wasn't sure how half of them even got on my friends list to be honest. It surely was not personal... even with the negative people. It was a vibe thing. Our vibrations were not the same. I'm sure my happy posts probably pissed them off at times. We don't all have to be friends though.

Is it awkward if you run into them on your street, at a party, event, or just around town? It's just like middle school. You kinda act like you don't see them. I'm the dumbass that still waves at them and says "hi." I just can't stay mad at people. It's too draining. Grudges are not my thing. Even if I don't prefer to be around someone or they wronged me somehow, I wish them well. I believe in what goes around, comes around. Call it karma or law of attraction, if I'm nice to people, that "nice" comes back somehow.

Plus, it feels better in my body. Life is too short for me to be mad at someone for not liking me. I like myself too much for that. ALWAYS be yourself. Fitting in is overrated. Staying true to yourself is priceless.

P.S. I would never unfriend family. You can always unfollow or hide their posts and then there's no drama. Can we all agree about something? "Unfriending" may be one of the weirdest concepts of this era. Thank God we didn't have this when I was in middle school, because braces, freckles, glasses, and frizzy, permed hair was hard enough. 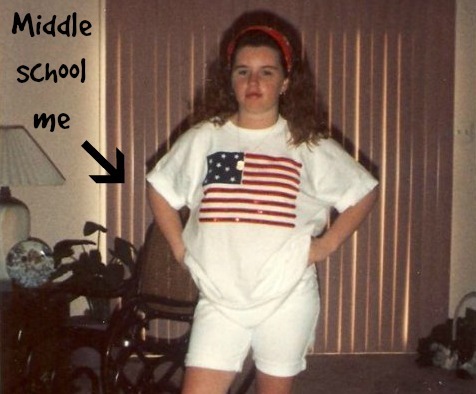