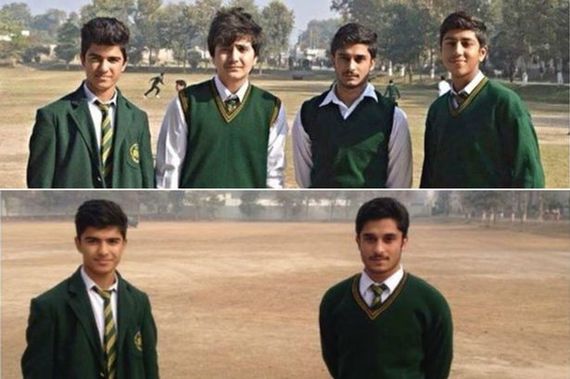 The image that became viral. Two friends stand next to empty spaces where their best friends once stood. Image taken from Talha Munir Paracha/Facebook.

On perhaps the darkest day in Pakistan's history, December 16, 2014, seven armed terrorists stormed an army high school in Peshawar on a killing spree, murdering at least 141 students and teachers.

Classrooms were turned into bloodbaths as these evil creatures stormed from room to room gunning down children at point blank, and torching teachers and students alive in front of one another.

Television channels were rapidly saturated with soul destroying images of blood stained children running for their lives, and parents losing all sanity in desperation to see their children amongst those running out alive. The nation watched in horror as the most painful and torturous ordeal they had the misfortune to witness unfolded in front of them.

Every mother's heart bled, every father's stance trembled. Every child in Pakistan was under attack. 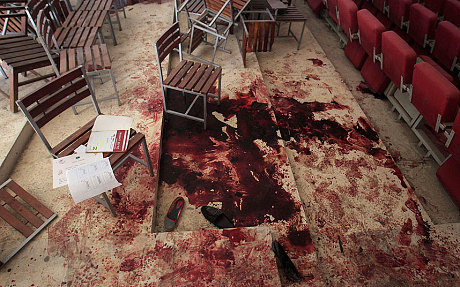 A blood stained classroom after the massacre. Image taken from the BBC.

Pictures of books soaked in blood and bodies of children piled on top of one another as they lay dead in their classrooms are amongst many images that still haunt the nation today. Harrowing accounts of children and the mourning of bereaved parents shook the firmest of composures.

"You can't imagine that those small bodies I am burying since yesterday felt much heavier than those big ones I had buried previously," shared a gravedigger form Peshawar.

A father clutched a shoe in his hand, recalling tying up his son's shoelaces that morning. "I have the shoe," he cried, "but I have no son."

One mother wept for her son who did not have breakfast that morning. 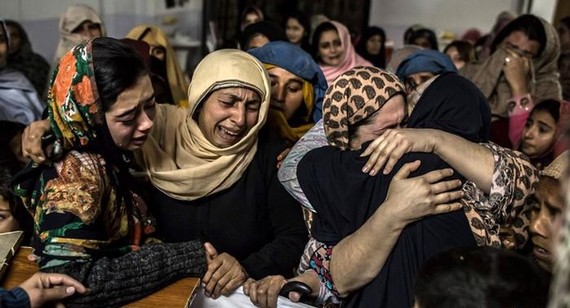 Relatives mourn over the dead as the bodies of their children arrived in coffins. Image taken from the International Business Times.

In the wake of this tragedy of monumental scale, the country, already troubled by terrorist attacks of smaller scales, immediately huddled together as one. Personal, political, religious and regional differences were put aside and they stood firmly under one green and white flag. As one nation the attacks were condemned, victims and bereaved supported and nationwide prayers and candlelight vigils held.

It was the second biggest school massacre recorded in the world. It may not have grabbed the attention of worldwide media for more than a few days, or qualified for a Facebook filter, but in Pakistan social media became consumed by the massacre and heartache. Neighboring countries and those afar shared their sentiments through candlelight vigils.

Soon after, a heart-wrenching song was released on national television, sung by young children, addressing the terrorists who committed the heinous atrocity.

The children that went to school that day and never came back have made their place in the history books of their country, and in the hearts and prayers of millions. Pakistan pays tribute to the brave survivors, the bereaved families and the brave SSG Commandos - especially the Captain who even after he was injured and only semi-conscious, refused to let his fighting hand loose. 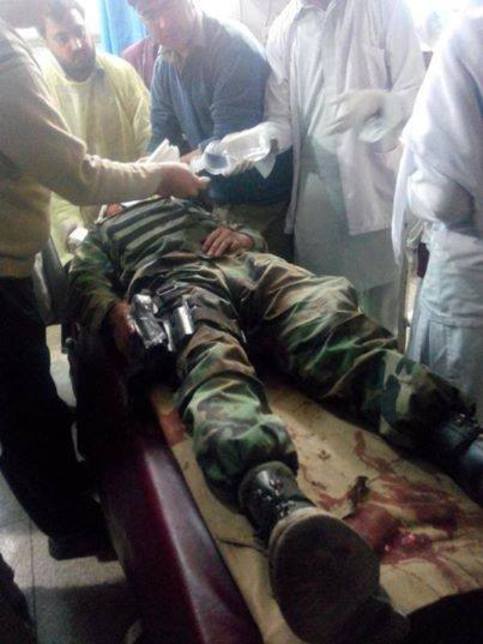 Soon after the attack, the Pakistani army increased its offensive, launching an operation to target the perpetrators. Terrorist attacks have decreased significantly since.

But these parents, and the families of all victims of terror around the word, are never going to see their children or loved ones smile again. They are not going to walk from one room to another and see them sat there busy in what they would normally be doing. Even if they gathered together all the riches of the world, or approached the superpowers of superpowers, they will never get to feel the warmth of their skin again.

It is times like these where many in Pakistan reflect on the words of popular school and national anthems to empower them and provide hope through such testing times. One, particularly echoic of images of all the candlelight vigils across the country, is often used as a lullaby:

Ghar ki khatir sau dukh jhelay, ghar tau akhir apna heh We may pain or suffer, but it is for our own home