Star Trek: The Motion Picture, the 1979 movie, was ground breaking for many reasons. It was, for instance, the first movie created from the popular Star Trek television series (the first of too many, some might say) but that's completely beside the point. It was during the filming of this movie that the immensely prolific and successful writing partnership of Billy Van Zandt and Jane Milmore came to be born. Van Zandt, a budding actor who had recently moved to Hollywood, was playing the role of a Rhaandarite ensign in the film. An extraordinarily large part of the gig involved sitting around the set in alien makeup waiting to be called.

"No one was allowed to see him," Jane laughed, remembering. Said Billy, "I couldn't go to lunch so Jane brought my Smith Corona typewriter in and we sat in my dressing room between takes and wrote." They ended up with a draft of their first of well over twenty plays, Love, Sex and the I.R.S. and thank you, Gene Roddenberry. Of their entire catalogue, this play remains to this day their most produced and performed - all over the United States. It's even seen the light of day in Guyana, where a commercial for it once surfaced on Youtube but now seems lost in the internet either. Billy: "It looked horrendous, but hilarious. For all the wrong reasons."

The play is still so popular that it is performed not just timed to tax season in April throughout the country, but all year long. And this is incredible for many reasons, not the least of which is that Van Zandt Milmore plays are among the most produced in the country. "We had no idea we wrote a holiday show," mused Billy. He and Jane met in high school during an acting competition as competitors from two different Central Jersey schools. Jane's school won Best Comedy and Billy's won Best Musical. Eventually they started dating, acted together in several shows, and moved to Los Angeles in the late 70's.

Like everyone else in Hollywood, they were looking for acting jobs. They decided things would vastly improve if they wrote their own material and acted in it. "So we sat down and we wrote ourselves something," said Billy. That turned out to be Love, Sex and the I.R.S., the first of many hilarious farces. Every year they returned to their home turf, Monmouth County, and mounted an original production which they wrote and starred in at the Dam Site Dinner Theatre, building up a fiercely loyal following. To this day, they continue to do a yearly spring production, now based at Brookdale Community College in Lincroft. They've become such a beloved fixture there that they now sponsor full and part-time theater scholarships at the College. Over thirty students have benefited from the program since it began in 1997.

In the late 80's, the pair were offered staff jobs on the Bob Newhart Show, Newhart, as writers. "We weren't sure if we should put our acting careers on hold for that year to go do it, it was a big decision," Billy remembered. "They treated us nicer than actors and paid us a lot of money," qualified Jane. "--So we never left," Billy finished. Their stint with Newhart was followed by a writing and acting gig on the brilliant sitcom Anything But Love starring Richard Lewis, Jamie Lee Curtis, and Ann Magnuson.

Was there a particular moment when they decided comedy writing was for them - this is what I was put on earth to do? Jane: "The second I heard people laugh, I thought, oh, I love doing this." Billy: "It never even entered my mind to do something straight. It was always comedy." "Nobody taught us how to write, we sort of winged it as we went," said Billy. "You can actually see our learning curve in print for the first six or seven plays." Has there been any change to their work process over the years? "There really isn't, it depends on the piece. Sometimes we'll improv out a scene, sometimes we'll structure out a show, sometimes Jane'll write a different scene and we'll put them together and see how they work."

What about working in television vs. working live on stage in a theater? "I want the audience, I want the theater," said Billy, "I don't want to have to answer to the network people. Luckily, we've had a nice balance doing both." Jane, on the other hand, said both were fine by her. "I like them all. As long as they're laughing, I like them. Making people laugh is a pretty cool job."

A career highlight for the pair was several years ago when they were handed the long lost pilot of I Love Lucy, which had been discovered in a box under the bed in the guest room of the widow of Pepito the Clown. Pepito had guest starred in the pilot and also had helped put together Lucy and Desi's vaudeville act that proved to CBS they could be successful as a husband and wife team. Though the network owned the copyright, no one else had a physical copy of the pilot. "CBS wanted to slice it down to 22 minutes and air it and we refused," said Billy. "We said no, you can't have the footage. It should be an hour special....we didn't want them cutting anything out. So we sort of blackmailed them and said you can have the footage, but you have to give us an hour special and they in turn said fine but if you can't finish it in two weeks so we can get it for sweeps, we get the right to chop it up and make it shorter." What they didn't count on was that Billy, who when he first saw Lucille Ball on television as a child was then certain about what he wanted to do with his life, also knew every interview ever given by Lucy and was therefore able to quickly cull enough of these clips to allow for Lucy and Desi to tell their own story and flesh out the hour. Billy and Jane got Lucie Arnaz to narrate and David Steinberg to direct, and it was the highest rated show of the year in 1989 and nominated for an Emmy.

Their newest Off Broadway production, You've Got Hate Mail, starts Thursday September 23rd at the Triad on W. 72nd St. and will go through December 30 and possibly beyond. The play is cleverly performed by five cast members sitting at desks reading and writing emails to each other. Friendships and marriages hang in the balance, are broken, rekindled, dashed and destroyed - all via email. Whatever possessed them to come up with such a relevant and hilarious idea in these days when emails bring down captains of industry with a few misbegotten keystrokes? "We saw Billy's wife, Adrienne Barbeau, do Love Letters (by A.R. Gurney) and I said - wow - wouldn't it be interesting to do the opposite," said Jane. "We kicked the idea around for awhile, didn't do it. By the time we did do it nobody wrote mail anymore so it became email." Jane was actually in the throes of a difficult divorce and showed a friend some of the emails that resulted. Those very emails became the backbone of the plot.

"The fun part for me is watching the recognition that goes through the audience," said Billy. "You can tell that every single person in the audience sent some email they didn't mean to send, or they got in trouble at work for a joke they posted, or something." Email creates a false sense of security. "There's no boundaries," Jane stated. "It's not an in person connection so people will write and say things they wouldn't if they were standing in front of you." 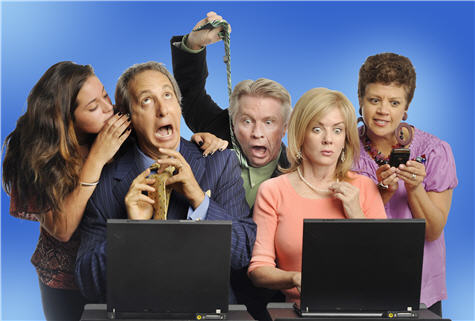 Other Off-Broadway productions they've written and starred in include Silent Laughter (a slapstick silent delight accompanied by an organist), Drop Dead! (a potboiler murder mystery), and the Marx Brothers musical A Night at the Nutcracker (in which the Marx Brothers are re-imagined as the owners of a ballet company - the movie they never made). In addition to the many farces they've turned out, they have also been three other additional musicals: High School Reunion: The Musical (a side-splitting look at a 30th High School Reunion, set to music), The Pennies (a mockumentary about a band starring in a fictitious TV show on opposite The Monkees), and Merrily We Dance and Sing (Gilbert & Sullivan meets the Marx Brothers).

What's percolating in the minds of these very prolific playwrights? "We've always done about three or four things at the same time," said Billy. "Anytime we're working on a TV project...we'll be working on a play, we've got another story in mind to do after that one, and then we'll have a TV idea we want to go sell, so if any time we're suddenly out of work we'll just shift gears and go do a new project." They're gearing up to pitch pilots to networks very soon, as it happens, and they've got a farce ready for next spring at Brookdale called A Dirty Farce.

With the current financial climate the way it is, making life difficult for everyone, most especially those trying to make their living in the arts, did Billy and Jane have advice for those who feel the calling? "I can't tell you how many people told us not to do the stuff we do - that you can't make a living," Billy said. "I would push anybody to do it as long as that's really what you want to do. And you have to realize that there are thousands and thousands who want to do the same thing. You just have to work harder at it than anybody else." Jane added, "It's the same thing you'd say to somebody who wanted to be a musician or an actor or anything like that. If you feel like you don't have a choice, then you have to do it."

After their work with Don Rickles, Richard Lewis, Olympia Dukakis, Ann Magnuson, Bob Newhart, Martin Lawrence to name a few, was there anyone they still hankered to work with? They named Steve Carell, Alec Baldwin, and, of course, Woody Allen. "He's on the top of the list," said Jane.

For more on the production, visit the You've Got Hate Mail website.