Whether you rely on Siri or Microsoft Cortana as your intelligent personal assistant, you're placing a lot of faith in artificial intelligence. Not only are many software programs dependent on data that was once created and digitized by humans, there are no guarantees that any software package is free of bugs and glitches.

In 1920, Czech playwright Karel Capek published R.U.R., a science fiction drama which introduced the word robot into the English language. Within three years, R.U.R. (which stands for Rossum's Universal Robots) had been translated into 30 languages.

By April 1968, when MGM released Stanley Kubrick's groundbreaking sci-fi film, 2001: A Space Odyssey, people were beginning to learn what can go wrong when computer technology gets one step ahead of the humans who designed it.

During more than 25 years as a medical transcriptionist, I've watched new breakthroughs in technology be dangerously overhyped. By the time I wrote Dictation Therapy For Doctors I had already listened to plenty of physicians whose language skills were so pathetic that they could not dictate their way out of a paper bag.

Some had problems using English as a second language; others simply could not formulate a coherent sentence. My all-time favorite example reads "The patient is a 26-year-old mother of seven who was in the operating room for some reason but fell asleep when it was discovered that she was pregnant at another hospital."

With today's widespread adoption of speech recognition technology by many medical transcription services, the safety net once provided by human medical transcriptionists has evaporated into thin air. Missy Snider Adelson (a Facebook friend in Oregon) has taken to posting some of the better "voice wrecks" she has encountered in her work. They include (but are certainly not limited to):

Numerous articles have recently raised concerns that robots will soon be taking over everyone's jobs. Nowhere is this more evident than in hospitals and nursing homes, where artificial intelligence and automation have led to increasing levels of productivity from robotic devices. In some cases, robots have even been able to offer a form of emotional comfort to patients while performing seemingly menial tasks.

The ease with which humans now interact with some robots can be seen in the following clip (which shows how far robotics have progressed from production lines in manufacturing plants).

In other cases, robotics have progressed to a point where the ability to schedule and automate certain tasks can lead to a reduction in employees (as well as a reduction in overtime pay and expensive employee benefits).

Of course, not all human encounters with robots are designed for clinical purposes. Indeed, some can have wildly unanticipated results.

When it comes to future uses of artificial intelligence, one might well ask what Stephen Hawking, Steve Wozniak, Elon Musk, and Noam Chomsky have in common. The answer is that they have all signed an open letter authored by the Future of Life Institute that demands a ban on offensive autonomous weapons (killer robots).

When computers and robotics enter the workplace, repetitive mechanical tasks are easily performed. However, in some fields (medical transcription is a perfect example), two crucial assets quickly vanish from the scene: institutional memory and cultural literacy.

This incalculable type of loss was recently brought home at the EXIT Stage Left when Stuart Bousel directed a production of The Desk Set (produced by one of his ancillary theatrical organizations, No Nude Men Productions). 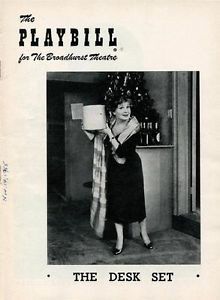 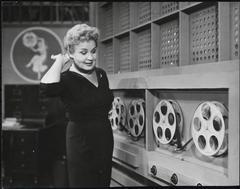 The action takes place in "the Reference Department of a large radio and television broadcasting company in midtown Manhattan." With a sister and brother-in-law who are retired librarians, Marchant's play had particular resonance for me. 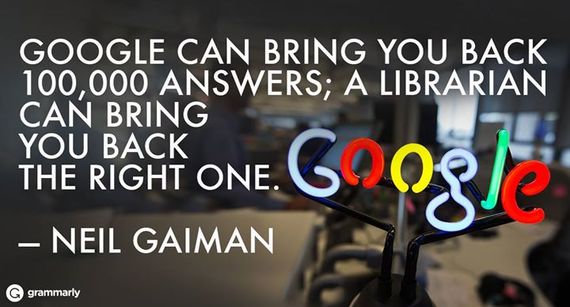 Food for thought from Neil Gaiman

Working on a unit set designed by Jennifer Varat (with a huge, period appropriate mockup of a computer designed by I.D. Horg), The Desk Set depicts the cultural and social impact the arrival of a computer can have on a highly skilled work force. Those old enough to have worked on an IBM Communicating Mag Card "Selectric" Typewriter (which had enough memory to store 8,000 characters) -- or who can still recall the era when a keypunch operator earned decent money -- will have no trouble remembering the trepidation felt by secretaries and data entry clerks as computers made deeper and deeper inroads into office work.

In the case of The Desk Set, the skill sets being challenged are those acquired by people who enjoy doing crossword puzzles, reading extensively, keeping their fingers on the pulse of popular culture, and allowing their curiosity to pursue the kind of knowledge which led to 1979's release of a board game entitled Trivial Pursuit. Such workers boasted the kind of cultural literacy that, in today's functionally illiterate society, would be referred to as "knowing stuff." 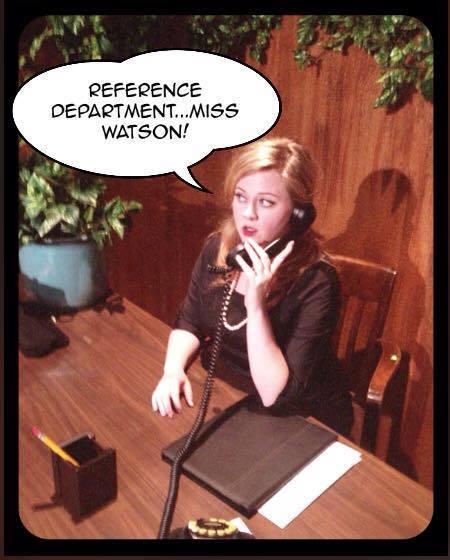 Allison Page as Bunny Watson in The Desk Set
(Photo by: Jay Yamada)

In The Desk Set, the EMERAC computer (the "Electro-Magnetic Memory and Research Arithmetic Calculator" whose acronym was obviously inspired by 1946's introduction of the ENIAC or "Electronic Numerical Integrator And Computer") arrives shortly after methods engineer-efficiency expert Richard Sumner (Alan Coyne) has spent some time skulking around the office, measuring floor space, and trying to understand how librarians perform their jobs. Its champion is Miss Warriner (Carina Lastimosa Salazar), the kind of administrative toady who nearly reaches orgasm whenever her beloved computer spits out a fact. 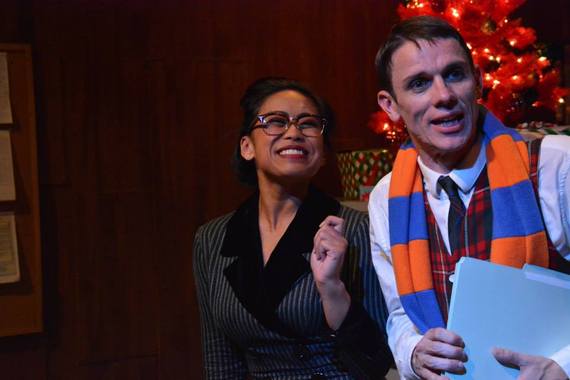 Miss Warriner (Carina Lastimosa Salazar) and Richard Sumner
(Alan Coyne) are preparing to introduce a computer into the
workplace in The Desk Set (Photo by: Jay Yamada)

Computers, alas, have little awareness of the social fabric that grows between knowledge workers. Thus, EMERAC (affectionately or fetishistically referred to as EMMY by Ms. Warriner) has no way of understanding that an office romance has been festering for seven years between the department's manager, Bunny Watson (Allison Page), and the studly, if often clueless marketing director, Abelard "Abe" Cutler (Nick Trengove). 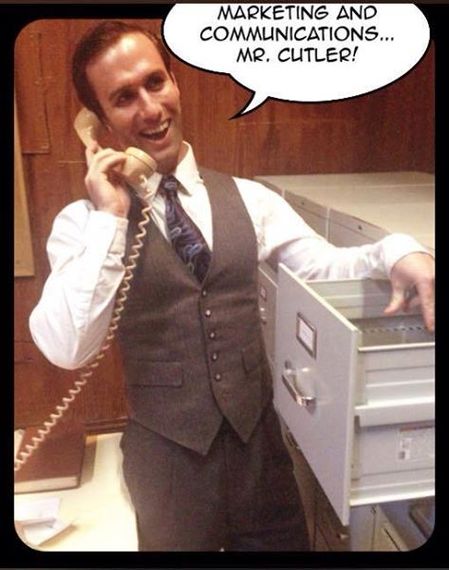 Nor could the EMERAC have any awareness of the competitive camaraderie enjoyed by Bunny and her subordinate librarians, Sadel Meyer (Jeunée Simon), Ruthie Saylor (Kitty Torres), and Peg Costello (Megan Briggs). Not only can these women reel off the names of Santa's reindeer and recite popular poems off the top of their head, they know when it's better to simply hang up on a rude caller. 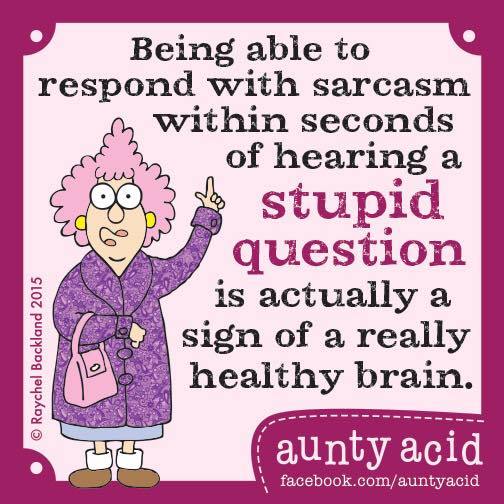 The female employees at the firm are getting restless as the company prepares for its annual Christmas party. Some are suspicious of Mr. Sumner's motives, while others think he's kind of cute. Some are eager to get drunk, while others are hoping they have enough money for the rent. 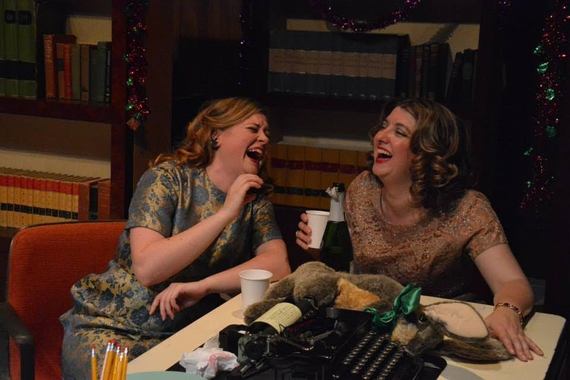 Ms. Warriner, of course, is elated about the installation of her beloved new computer. But when put to the test, it seems that EMERAC can only deliver one fact at a time (depending, of course, on what has been fed into its system). When the department staff all receive pink slips along with their end-of-year paychecks, paranoia starts to take over -- especially when it's discovered that the computer has issued pink slips to everyone in the company (including its CEO). 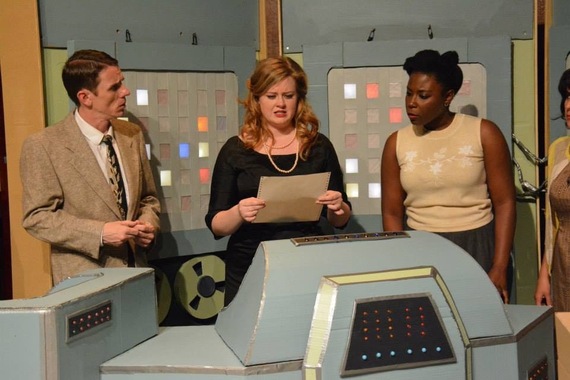 Richard Sumner (Alan Coyne), Bunny Watson (Allison Page) and
Sadel Meyer (Jeunée Simon) try to get a straight answer out of
EMERAC in The Desk Set (Photo by: Jay Yamada)

This revival of The Desk Set turned out to be an excellent vehicle for Allison Page (one of its co-producers), whose comedic skills and sarcastic tongue proved to be an excellent match for Bunny Watson. While I especially liked Alan Coyne's work as the methods engineer and Nick Trengove's portrayal of Abe, Megan Briggs did a beautiful job with the character of Peg Costello.

In smaller roles, Lisa Drostova appeared as The Mysterious Lady, Andrew Calabrese was the Man from Legal and Alejandro Torres portrayed Kenny, the delivery boy. Abhi Kris doubled as Mr. Bennett and Mike with Marissa Skudlarek doubling as Miss Ferris and Elsa. Bousel's direction kept the cast moving at a fairly tight pace, even if the play's ending seemed a bit old-fashioned (in the way that Republicans crave a return to the 1950s world of Leave It To Beaver).