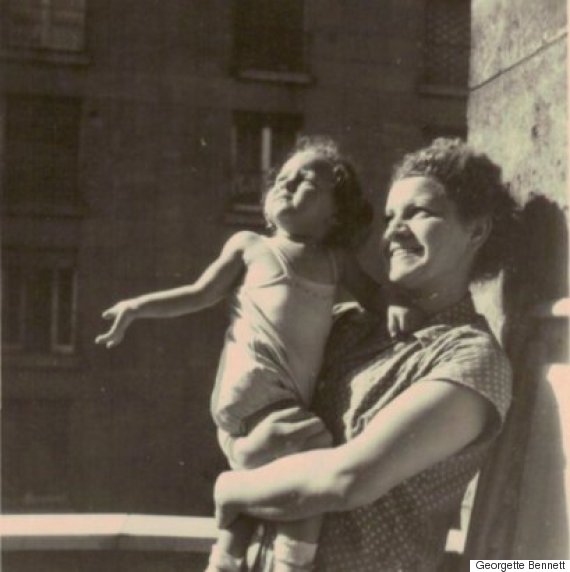 Paris, 1948: A couple and their toddler arrive in Paris from Budapest. The toddler is me. My parents have survived the horrors of the Holocaust - the camps; the pitiless deaths of their parents, spouses, children, siblings; the loss of their property and livelihoods. The Communist Iron Curtain drops and my mother has again been imprisoned. After she is released, my family takes one suitcase and flees to France. Paris becomes our place for healing. My parents and I wait in France - for years - for the precious papers that allow us to emigrate to the U.S. The passenger manifest on the ship that brings us across the Atlantic lists our nationality as "Stateless." We are refugees.

Paris, 2015: ISIS attacks kill 129 people and injure hundreds of others. Paris has become a city of rage and death. One of my Parisian family members emails me: "We are very afraid with the situation in Paris. It is really just chance that we are safe, because the attacks happened near my house." One of the friends who, after the war, made France a haven for us reports that his older son, who was in one of the targeted locations, just missed being killed by a half hour. One of the terrorists carries a Syrian passport - perhaps forged. And suddenly, Syrian refugees fleeing for their lives are seen as terrorists rather than victims. I was on a plane headed to Berlin when the attacks occurred. Ironically, I was going to Berlin for meetings related to the Syrian crisis. This city and those attacks have special resonance for me. My meetings took place just a short distance from the bunker in which Hitler committed suicide.

The Paris tragedy has become politicized - and I'm ashamed. I'm ashamed that the country that laid out a welcome mat for my family has elected officials who so readily want to slam the door shut on the victims of the worst humanitarian crisis since the Holocaust. Some even want to impose a religious test on resettlement, all in the name of "national security." What they're really doing, whether by intent or ignorance, is fanning the flames of xenophobia and Islamophobia. It reminds me of some of the most shameful episodes of U.S. history: the mass internment of Japanese Americans during World War II; and the refusal to allow the passengers of the St. Louis to disembark in an American port, sending them back to Europe - many to their deaths.

As eloquently stated by the International Rescue Committee, "Banning Syrian refugees will not make America safer; it will make refugees more desperate. Syrian refugees are fleeing violence - including by ISIS - and are seeking safety for themselves and for their families." Much of the fear-mongering is based on incomplete or distorted information about what it means to be a refugee and the process of resettlement.

Since 9/11, refugees have been subjected to the most stringent security checks of any kind of traveler to the U.S. They are first referred for resettlement by the United Nations High Commission on Refugees. They are then interviewed, in person, by U.S. Citizenship and Immigration Services officers who travel to the sites where refugees are located - e.g. Turkey, Jordan. If they pass that hurdle, they are subjected to further screening by multiple agencies. Among these are the National Counterterrorism Center, FBI, Homeland Security, and Department of Defense. Would a terrorist want to subject him/herself to this kind scrutiny? Really? There are easier ways to infiltrate the U.S. than to sneak in among desperate refugees.

It's important to maintain these screening criteria because they work. But, our procedures are slow because of inadequate staffing and inconsistent protocols. Refugees are kept in limbo for 18 months to two years before they can enter the country. Congress needs to allocate more funds to hire screening personnel. That would speed up the process while retaining our stringent processes, and ultimately be less expensive by short circuiting wasteful duplication down the line. Equally practical, each screening agency needs to use a uniform algorithm and to coordinate with the others for the system to run smoothly. And finally, why not prioritize the women and children, who make up 80% of Syrian refugees? They are the most vulnerable of the vulnerable and unlikely to be security risks. And why not prioritize some of the 15,000 skilled physicians who have fled Syria after being the target of bombing and torture? These are not likely to be security risks either, and we urgently need experienced doctors in the many U.S. communities that have little access to medical care.

Ultimately, it is in our interest to open our doors to a skilled and educated population that can reinvigorate dying American cities. It is in our interest to rescue the displaced Syrian children who have been deprived of years of education. If we don't take care of them now, we will have allowed to fester an angry and alienated population that will grow up to be vulnerable to radicalization.

It is in our interest to safeguard the values that have made America great. Why blame the victims of terror for the evil acts of the terrorists? This runs counter to who we are as a nation, which enshrines religious freedom in our Constitution and has always welcomed the distressed from other lands. If not now, when?

The author is the founder of Multifaith Alliance for Syrian Refugees, a project of the Tanenbaum Center for Interreligious Understanding