No one likes a thief, a con artist or a scammer. And that's why it feels oh-so-good when those shady individuals get their comeuppance. We know you'll enjoy the following stories about thieves trying to steal from innocent people, until the tables are turned and they themselves get duped. (Mwahahaha.)

1. This thief stole the wrong woman's phone. And then managed to leave his wallet behind.

This woman had her phone stolen, but in the thief's haste to flee, he dropped his wallet full of cash, credit cards and various forms of identification. She then posted this priceless status to her Facebook friends, asking them to text her phone. Advantage: Theft victim. 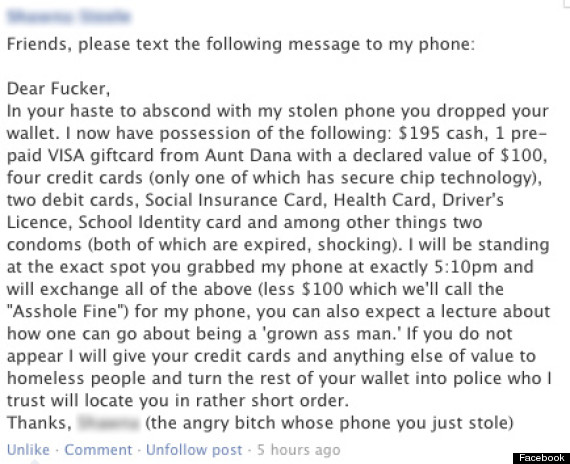 2. This crook got caught in a thief trap.

A British TV show called "Swag" set up a semi trailer full of valuable thief bait and left the door open as an invitation. One guy couldn't resist the allure of unattended valuables, but didn't plan on the door closing behind him and the truck trailer actually being revealed to be ... a mobile thief-displaying cage!

3. When a woman stole this man's snow shovel, he made extra sure she had an opportunity to use it.

After his surveillance cameras caught a strange woman digging out her car with his snow shovel and then walking off with it, David Welles decided to take action. But he wasn't going to slash her tires or break her windows, as some suggested he should. Instead, he decided to use his new snow blower to bury her car again. Since she loves shovels and shoveling so much. 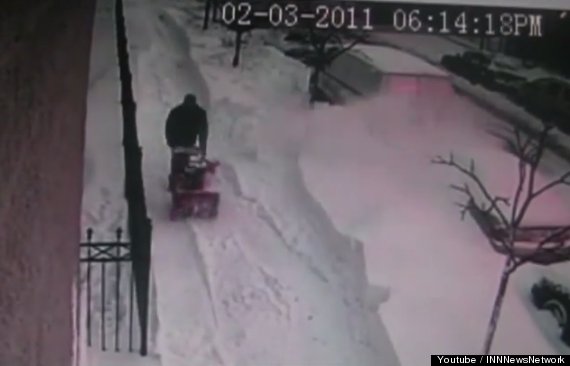 4. This laptop thief reminded us that karma is a bitch. 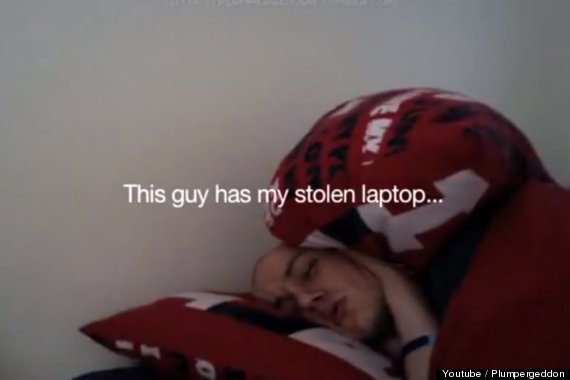 5. Thief thought some random hot girl was actually trying to meet him on Facebook.

When Victoria Laird Cortes sought $3,500 in wages owed to her by her fugitive former employer, she realized that he was nowhere to be found ... except on Facebook. So, Cortes pretended to be an impossibly beautiful "model" and "exotic dancer," using fake pictures of Puerto Rican women, befriending her boss (he accepted in two minutes) and flirting with him over Facebook. Her name was Tatiana La Coneja, Spanish for "the Rabbit." She eventually convinced him to meet her in public and then tipped off bounty hunters after he took the bait. Rabbit? That day he was dining on crow. 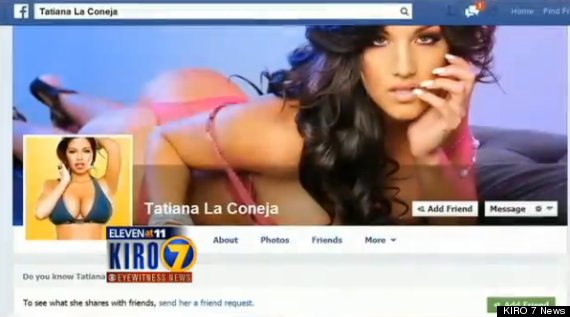 6. This woman should have thought twice before stealing from this person's porch.

When a thief snatched an Amazon delivery right off his porch, Tim Lake used his video surveillance to make a hilarious wanted poster that would shame even the most hardened criminals. 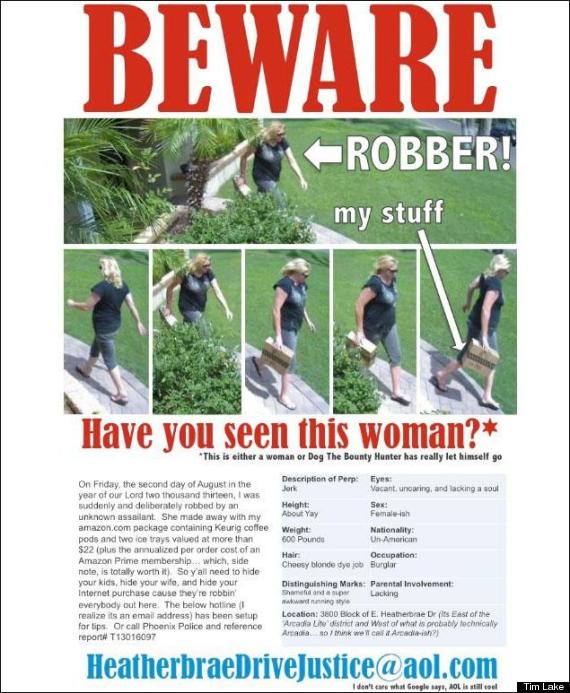 7. This bike thief got a serious taste of his own medicine.

Shortly after her bike was stolen, a girl in Vancouver found the thief selling it on Craigslist. She arranged a meeting with the thief, pretending to be a prospective buyer. She met the guy in a McDonald's parking lot and asked to take it for a test ride. He agreed, just as long she "didn't ride away." Which is exactly what she did. She met her friend in a nearby parking lot and posted this shortly after. 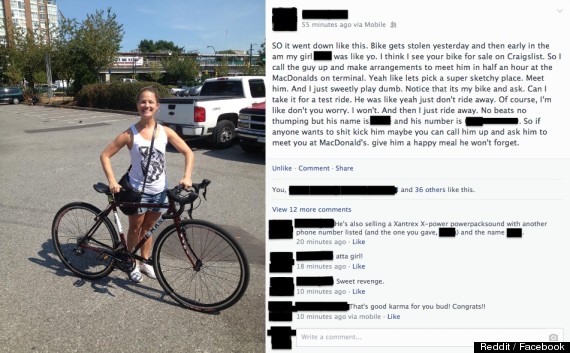 8. This would-be scammer messed with the wrong 80-year-old grandma.

80-year-old Ruth O'Leary was being pestered over and over by a phone scammer who insisted that she had won $2.5 million, but first he needed her to send him some money. O'Leary never bought it for a second. "Send me the money and then I'll send you the amount back," O'Leary said. To entice her, the thief sent O'Leary $50 as a goodwill gesture. So the savvy octogenarian kept the money. Imagine O'Leary's amusement when the scammer threatened to call the police on her. Yes, good luck with that, buddy. 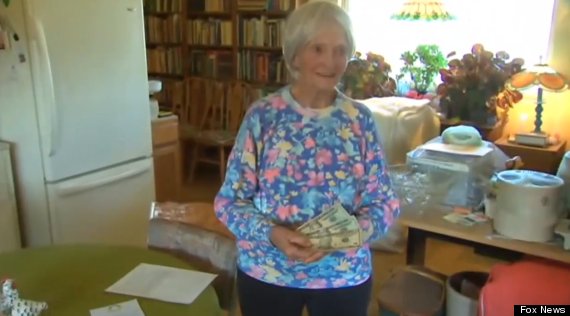 9. This guy spends his time scamming the scammers, and you won't believe how successful he's been.

Anthony Disano, the owner and creator of thescambaiter.com, makes his living thwarting scammers. He occupies the time of thieves and con artists so they have less time for you. Instead of sending the money the scammers ask for, he regularly sends random junk he insists is worth the required value. But he makes the con-men pay for the shipping. In reality, it's just junk, like worthless computer parts or broken appliances. According to Disano, he once duped the same con artist nine straight times, costing the scammer $65,000 in shipping charges.

10. This jerk stole someone's phone, and unknowingly ended up becoming the star of a website.

After their iPhone was stolen, this victim was surprised to find the thief had not disabled the phone's auto image upload function to the storage site Dropbox, allowing the victim to access any and all photos taken by the thief. So, they did what any wronged tech savvy person does: They started a Tumblr to poke fun at the thief with his own photos. And that's how "Life Of A Stranger Who Stole My Phone" was born. It will definitely make us think twice about how cool any of us really look in our photos.

11. This redditor had a BRILLIANTLY passive aggressive way of getting his bike back.

In a thread about the girl stealing her own bike back after finding it for sale on Craigslist (#7 on our list), Redditor robmausser shared his own strategy for getting back his stolen bike.

"Did a similar thing when I was living in downtown Toronto. Bike was stolen, and about a month later find it chained up to a bike post walking back from the gym, literally a block away from where I lived. I came up with [a] plan: If I couldn't have my bike, neither could my thief. I went to the closest hardware store, purchased a U-Lock, and locked my lock ontop of his lock. Thus, my bike was locked with both my lock, and his. A couple weeks went by and, I guess out of final frustration, he took off his bike lock. I took mine off, and rode it home."

It's possible that someone else could have purchased the stolen bike, which would likely have led to much confusion, but if that's the case, it's just a reminder to double and triple check your second-hand products to make sure they're legit.

12. This guy also got his bike back, but he gave the thief something to remember him by.

When this Redditor found his recently stolen bike locked up on the street, he and his friends sprung into action. First they secured it by placing their own lock on the bike. They returned the next day with some tools to remove the thief's lock. But they didn't want the thief to walk away empty handed, so the victim left a note, the thief's broken lock and a graphical representation of a bike, until the thief "could afford [his] own." Aw, how thoughtful. Definitely more than they deserved.

13. This guy stole a laptop, then used it to record his "fresh" dance moves. But he never counted on this.

You know the old saying, "Dance like no one's watching." Well it's much funnier when people simply don't know that anyone is, in fact, watching. Not realizing the victim still had remote access to his stolen hard drive, the thief filmed himself practicing his ... fancy dance moves. Well, the victim found the video and uploaded it, because why not?

The thief has since turned the laptop over to police and even issued an apology to the owner and asked if he could take the video down. To which the owner replied, "Thanks... but no thanks." And the video remains to this day. Let that be a lesson: if you're going to steal someone's laptop, don't dance in front of it.

You know what, maybe just don't steal to begin with?