When burglars in San Bernardino County, Calif., realized the computers they'd stolen were from a nonprofit that helps victims of sexual violence, they returned them -- along with an apology note that may restore your faith in humanity. 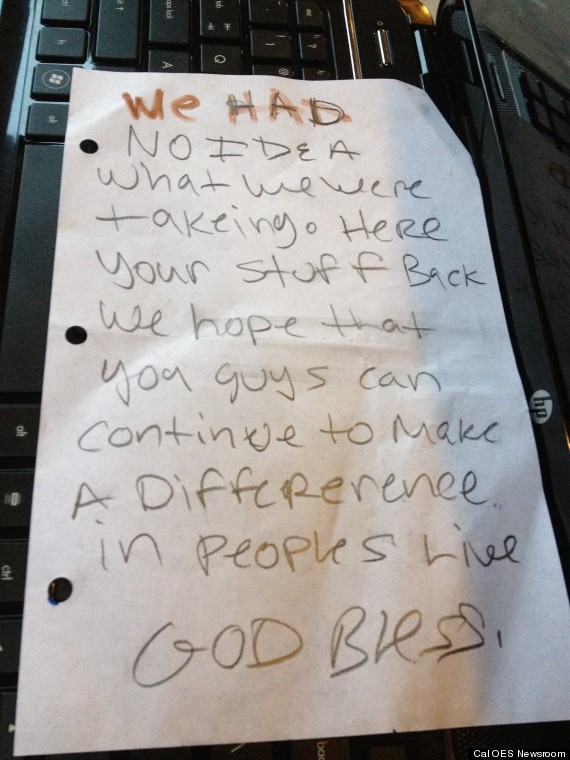 The thieves broke into the San Bernardino County Sexual Assault Services office on the night of July 31, according to a press release from Cal Governor's Office of Emergency Services (OES). Candy Stallings, the nonprofit's executive director, said the burglars had shimmied between floor boards and walls to get past the building's high security system.

They also clipped multiple alarm wires, CBS Los Angeles reported. Within minutes, six computers with hard drives, a laptop and a bag of valuables were taken.

Police called Stallings the next morning around 4:30, according to NBC Los Angeles. They told her more suspicious activity was taking place at her office.

But when Stallings arrived, she found a surprise.

"All my stuff was in front of the door," she told the station. "There was a shopping cart, and there were the PCs that were taken, there was the laptop. Everything was there."

In that laptop, an investigator discovered the note. It read:

We had no idea what we were takeing [sic]. Here your stuff back. We hope that you guys can continue to make a difference in peoples [sic] live. God bless.

"We were all pretty shocked," Stallings added. "You've got to be kidding me. I was in disbelief. I got chills. I got very emotional."

"This is the first time in my career I have seen the return of stolen items," San Bernardino Police Lt. Paul Williams told NBC. "It appears the guilt of taking the property caused the return of the items."

PHOTO GALLERY
The Most Heartwarming Thank You Notes To The Police

1 / 7
For Brookline, Mass. Police In The Wake Of The Boston Marathon Bombings
In the aftermath of April's Boston Marathon bombings, elementary students at the Lincoln School in Brookline, Mass., reached out to local law enforcement to thank them for the incredible job they'd done protecting their city.
Facebook/Brookline MA Police Department