Just one day ago, a new book came to my house: Thing Explainer by the writer of another book called What If. I've written about that other book here. This new book is an effort to help people understand all sorts of cool stuff about the world and how it works using simple words -- in fact, only a set of the ten hundred most used words. (Because the writer's names are not part of this set of words, I've put them only into the heading above, so you know who I'm talking about.)

So I thought I'd try to tell you a little about this new book the same way, using just those few words. I will be the first to say, however, that my effort to do this doesn't sound nearly as beautiful as the effort of either the writer of this new book or another well-known man who wrote plays and other things a long time ago, like "All's well that ends well" or "As you like it," or "To be or not to be, that is the question..." Sigh. We do our best.

The person who wrote this new book also draws funny and much-loved pictures that make us think and laugh. Those pictures can be found here, at the writer's home place on the computer cloud. I have some of these pictures on my door at work; I share others with friends on the computer place (which the writer calls "Short Bird Talk" -- you get the idea) where you can only use at most ten added to four, times ten, letters. By using this small number of letters, you have to think about how to say things in a different, shorter, way. This new book does the same kind of thing: it makes us think about how to explain ideas and offer information in a simpler way. 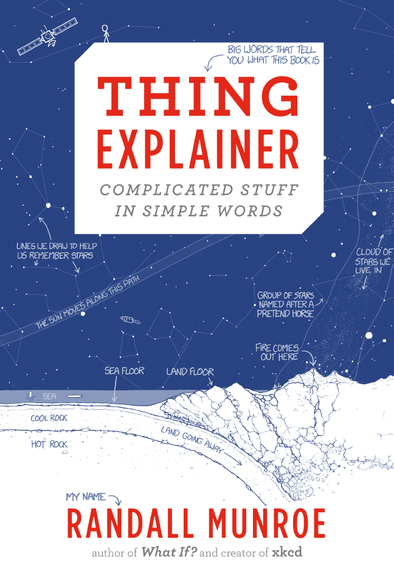 Those of us who work on trying to understand and talk about how the world works often use far too many extra words, or big words or hard words, that in the end fail to help others learn important things. One of those things is the problem of how rain, snow, storms, water, seas, food and animals will be changed by the bad stuff humans put into the air when we burn dead old living things or cut down forests. This is a hard problem that will change the world in ways people often don't want to think about, and those of us who work on it sometimes have problems sharing information about it in a way that helps our leaders, friends and family understand it. [I know that sometimes people don't really want to learn these things, or won't let their minds be changed, no matter how many simple words one uses. That is a different problem and there is no nice word to use for them.]

There are really great things in this book. The writer has picked all sorts of day-to-day things to talk about from trees to the Tree of Life, to machines and ships that go through the water or fly in the air and up to space, to how living things are built and work, to computers, to the stars that light up the night and our Sun that lights up the day. There is a page about the color of light that is one of the best explainers about this hard idea that I've ever read. My teachers at school could have learned a thing or two about teaching from this.

Words are, of course, only part of the way we talk to each other and share ideas. We also use pictures, sounds and ideas to get across meaning. Because the book also has many of the writer's drawings, our minds may take short cuts that help us understand what we're reading. When I read the page about the "Bending Computer," I see the picture of the computer that I carry around with me every day, which has (of course) another name. That name pops into my head when I look at the picture. When I turn the page to where he talks about the "Up Goer Five" (which, by the way was the first machine he wrote about in this way a few years ago), the picture makes a name pop into my head (think "World with Rings Five,") because that's what I grew up with. But think about it for a minute: "World with Rings" is pretty great way to talk about that far-off world. When he talks about the table that has information about all the pieces of matter that make up everything, he uses a picture of a well-known man with wild hair who discovered cool things about space and time, and in a quick second, most of us can name him and this kind of matter. (See the picture.)

Here is one of the best things I came to understand from reading this book: Sometimes we use longer words to hide true meaning, while using simpler words may help us see things in a different way. Years ago, at the end of a terrible world war, humans created a war machine that uses the same stuff that burns in the Sun. We all call it by a name that hides its true power (said like "new" "clear"). Other words, simpler words used in this book, may offer a better understanding. "Machine for burning cities," which makes "run away fire" and "would blow up with enough light and fire to burn a whole city, and send up clouds of dust that made people sick" may be a far longer way to name this "thing" than the words we actually use every day, but it is a truer way to tell us what it does.

Last of all, the book isn't only for helping to teach about how the world and machines work. The writer has several pages for other important ideas, such as the laws of the country we live in. In this case, the way these laws were first written over two hundred years ago is beautiful... "We, the people..." "In order to form a more perfect..." But using simpler words can also help people today understand the key ideas first put on paper by the people who started our country. Such as: "The country can't make laws about God or what people talk about, who they hang out with or what they write about." And "The police can't go through your stuff without a good reason" and they "can't do stuff to you just because they want to." As our laws get more and more confusing to people not trained in law, these simpler explainers are important. (And maybe some of the people who want to be leaders of our country should read these laws and ideas more often. Just saying.)

This set of ten hundred most used words leaves out many other important, beautiful and clear words. I don't know why, for one, it has all the numbers one through ten except for the number after eight. It would be nice to use other words to explain things, and of course in the real world that's what we do.

That's not the point. In the end, we must remember that sometimes the simplest things are the clearest. Sometimes simpler words are better. And sometimes, a picture is as good as ten hundred words.

Buy this book for yourself or others, for gifts, for fun and for learning. You won't be sorry and your friends will love it.