I'm trying to conjure up all of the things I hate. Sure there are a bunch of them. Picking up dog poop. The smell of mothballs. Discovering rotten milk the hard way. These are all awful experiences.

But the hate I muster up for these experiences pales in comparison to the hate my son has already mustered up for silence. From morning to night there's talking. When I read a book to him, half the time he still speaks more words in than I do. Sometimes, his mother and I just don't get to converse. There's simply not enough air. Period. 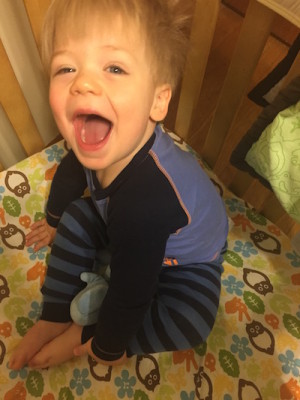 When an infant is content, he is very chill. Or possibly sleeping. It is easy to forget that someone who doesn't make a sound is in the room. Or even in the car. I kind of understand how accidently leaving an infant in the car MIGHT happen. It is an awful thing, but sometimes they simply don't make noise. (Note: I've never left Jamie in the car. I also think I'd notice pretty much immediately.)

On the other hand a toddler is all about the noise. Toddlers are always chasing, but rarely finding contentment. They look for it by running, or jumping or playing. They look for it in words and questions and statements. But they never stay on any one activity too long.

There are the excessive "Why's?" to the point where the question makes no logical sense.

Then, there are the demands.
"I want water!"

Or, my personal favorite "I wanna need it!" This one is usually exclaimed while pointing at something in the distance.

It stands to reason, that any parent would just want their toddler to spend a few moments of the day quiet then, right? WRONG. This is when parents need to worry the most, because toddlers are plotting. A quiet toddler is almost always up to something.

There may be a permanent marker coloring the wall, a cat's tail being pulled, or some other mischief afoot.

Relief is the default emotion for any parent who's been bombarded with toddler noise for an entire day, when they notice its absence. It is quickly followed with a flood of suspicion so great it quickly washes out said relief. This causes the parent to (rightly) run into the room (if they're not there already) wondering what's going on. Sometimes there's a sigh of relief, and sometimes the parent needs to go into damage control mode.

So long to the days when silence allowed you to rest and recharge. Now it only arouses suspicion.

Exploring fatherhood one dirty diaper at a time at <a href="http://spiralingupwards.com>SpiralingUpwards.com</a>.