I've been at this parenting game for a while now. Not as long as some of my wise fellow dad bloggers, but long enough to have accumulated quite a bit of dirt beneath my parental fingernails -- which have been painted dozens of times and in a variety of colors by my two daughters -- and long enough to have walked a metaphorical mile with LEGO bricks stuck to the bottom of my parental feet.

Despite the relative long-ness of my parental tooth, I'm also not immune to the nagging twinge of parental insecurity. I doubt myself more than any active-engaged parent who tries probably should. It's damn hard to be alive and alert in the Pinterest age of perceived perfection filled with amazing school lunches and darling lunch notes, handmade end of year teacher's gifts that radiate thoughtfulness, and countless kid/parent videos, each one more clever than the last. I can't compete with any of that sh*t either. Fortunately, this parenting game isn't a competition. Our kids aren't going to be holding up a score placard like the crooked Ukrainian judge at the end of an international figure skating tournament. They love us and if we try our best, they will notice and appreciate our efforts to keep them on the straight and narrow even if we take a winding path to get there.

So stop fretting over every decision and quit judging yourself against the people of the Internet. Half that crap is Photoshopped, anyway. Here are the seven things I finally stopped worrying about as a parent, and in turn, have made me a better, happier parent almost instantly:

1. Serving my kids vegetables and/or fruit every single day.
My wife and I have built a sturdy foundation, of this I am nearly almost totally 99 percent certain, probably, so there is no longer (was there ever?) a need to panic about their fruit and veggie intake on a daily basis. My daughters each, although one WAY more than the other, enjoy many varieties of fruits and veggies, raw and prepared in a variety of ways. It's all good. And if they skip a day or two, I know that they will be fine.

2. Spending an hour or two in front of a screen instead of playing outside.
Because it can be fun to loaf around and play games. Just look around and in the mirror -- we all have our noses in our phones! They are kids, after all, and it's relaxing to sometimes veg out in front of a TV screen or a device. The outside, with its sticks, lightning bugs, swing sets and scooters, is an option they choose often enough, so I can chillax if, on occasion, they pick the iPad or the 3DS instead. They will be fine.

3. Missing some of the check-the-box tourist destinations while traveling together as a family.
We no longer push our daughters' physical or mental limits to squeeze in everything when we travel. Instead, we do what we can at a leisurely pace, see what we can see, experience more of a place rather than see all of that place, and, in turn, leave the girls plenty still to discover should they return decades later with their own kids. So what if we miss something being advertised on a postcard at the airport? They will be fine.

4. Wearing shorts that are tiny or shirts that are skin-tight.
Their a** cheeks aren't sticking out, their underwear is not visible and the pockets are not longer than the hem (man, that trend is hideous) of their denim shorts, but their clothes, they are tiny-ish. I could never get comfortable in threads like that, although now that I'm losing weight, I find form-fitting shirts more pleasant than baggy ones. But then again, I am a man -- no one is going to bat an eye if my form is evident through my clothing as I walk down the street. Women don't have it so easy. My girls are 10 and 7 and they wear what makes them most happy without a care about a world full of adults who might judge, men who might leer or women who might tsk-tsk. My two goofball daughters dress for themselves and no one else, and that is what I wish to instill in them. They are comfy and they will be fine.

5. Jumping in the pool immediately after eating.
To quote Josh and the Jamtones' hilarious "Bear Hunt" comedy skit, "So I just had a piece of pizza, who cares?" Myths are for those with too much time on their hands. Finish chewing, then cannonball away, girls -- you will be fine.

6. Katy Perry, Taylor Swift, that "Best Day of my Life" song and other pop music.
The popular brand of music is no longer a bugaboo for me... but, let me be clear, the Demi Lovato version of "Let It Go" still sucks. I'm grateful for the kiddie music that has allowed me, as a music lover, to give my daughters song upon song that they were able to "get" from a very young age, songs that spoke to them and their childhood experiences as toddlers, grade schoolers and now, as kids who are just now beginning to grow out of their youth with a wistful melancholy about that very transition. While amazing bands like The Pop Ups, Recess Monkey, Lunch Money and The Not-Its are still being spun loud and proud and with much love, they are sharing space in our iTunes library with First Aid Kit, Brandi Carlile, and even more familiar names. It's all good because my girls know what great music, made with passion and presented live in intimate settings, is all about. They've been holding hands with it from the start. And they will be fine.

7. Not playing organized sports or "official" extracurricular competitive activities.
I was a sports kid, but my girls, they've tried gymnastics, ballet, tap, soccer, karate, basketball, floor hockey, tennis and golf, yet nothing has "stuck" as much as imaginative unstructured playtime together, as sisters, at home. They get along with other kids, especially if they're younger and adorable -- that's when my two mini-mommies shine -- and so I am no longer concerned about the absence of team or solo competitive pursuits. Many "experts" will tell you a child needs such activity, but even without much going forward, I am certain my daughters will be absolutely fine. 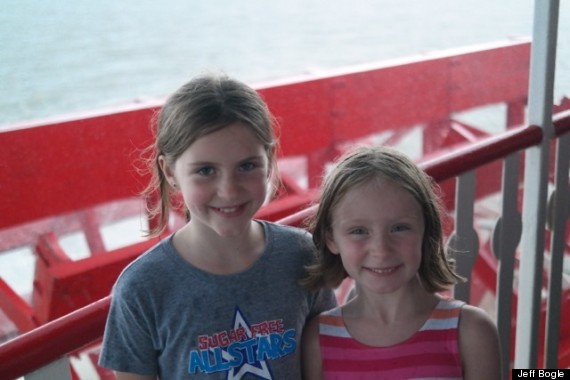 PHOTO GALLERY
Dads On How Daughters Have Changed Them
Download
Calling all HuffPost superfans!
Sign up for membership to become a founding member and help shape HuffPost's next chapter
Join HuffPost
Follow Jeff Bogle on Twitter: www.twitter.com/OWTK
Voting Made Easy
Register to vote and apply for an absentee ballot today
Register now

Growing Up Parents Dads Dads Parenting Tips Stop Worrying
This Blogger's Books and Other Items from...

Clash of the Couples: A Humorous Collection of Completely Absurd Lovers' Squabbles and Relationship Spats
by Jessica Azar