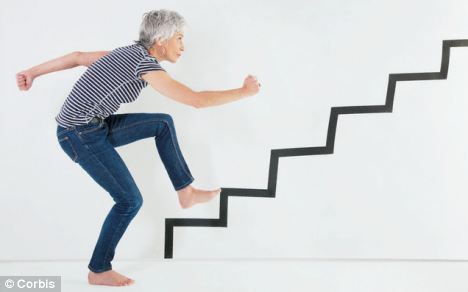 It started when something rolled under Life in the Boomer Lane's bureau. LBL's brain immediately started to bend down to retrieve the errant object. Her body did not follow. Her body stood there, while her brain imagined getting down, twisting around, and reaching. She finally decided that no item was that important, and she hoped she would remember to tell her cleaning person about the object before it got sucked into the vacuum cleaner.

Then First Grandson said, "NeNe, get down on the floor and play this game with me." LBL, being a real pro throughout her life at getting down on the floor (playing dolls, watching TV, and, in later years, performing the nasty on a variety of carpets) quickly answered "OK!" and then waited for her brain cells to set her body in motion. Nothing happened. LBL was confused. Surely, sitting on the floor shouldn't even have to involve brain cells. It should be a no-brainer, and LBL was capable of any activity that didn't involve a brain. Still, nothing happened.

She grabbed a chair. First Grandson said, "No, NeNe, on the floor!" LBL was frozen. The knowledge and/or muscle memory of getting down on the floor had disappeared. She did eventually lower herself to within about six inches of the floor, with the help of the chair, and then just sort of went into free fall the rest of the way.

It continued one day, when she had to go down the basement steps to get the laundry. She realized that she no longer ran down the basement steps. She told herself that was crazy, that running down the steps should be a god-given right, as important as being able to own a gun or vote for a politician who spewed scary nonsense. So, she believed that she started to run. Except nothing actually happened. Her brain kept shrieking "Just run!" but her body didn't cooperate.She finally ran, but it was a run that was slower than the younger generation could walk. It was not the kind of run that she had been doing for decades.

When it was time to come back up the steps, LBL was determined to run, in order to prove to herself that she was still alive and in control of her destiny. Again, she hesitated, not quite sure how all this worked. After a moment, she started a run that lasted about three steps, then changed into a walk. LBL still isn't sure how that happened without her cooperation.

LBL has recently returned from visiting Now Husband's family in Turkey. LBL already knows that European bath tubs have, for some reason, very high sides. As her first trip to Europe was at age 22, she had been negotiating these ridiculous tubs for many years. She turned on the shower and waited for the optimal temperature to be reached. Now it was time to get into the tub. Again, she was unable to do something that she had done for decades.

She looked around and saw nothing to hold onto. It didn't make her feel better to know that Now Husband's cousin was, at age 63, apparently able to negotiate her own bathtub. Finally, LBL noticed the water pipes coming out of the wall. She grabbed the closest one and hoisted her leg up. At this moment, her brain notified her that she had grabbed the hot water pipe, which was akin to grabbing a pot that had been boiling on the stove.

LBL had two choices: Let got of the pipe, fall backward, crack her head against the floor tiles and die immediately, if not sooner. Or, continue holding on until she got into the tub. She held on. When she released her hand, she saw that her palm was the color of her Big Apple Red toenail polish and it throbbed like crazy throughout the shower.

LBL isn't sure why her body is forgetting how to do things it has always done, but she is pretty sure this forgetfulness will continue. Hopefully, the ability to hold a spoon and fork will be the last to go. Or, at least a spoon. It's tough to eat ice cream with a fork.

PHOTO GALLERY
8 Exercises to Reduce the Effects of Aging