While writing this intro, I deleted the first paragraph approximately six times. My thoughts ranged from "Just get to the point already" to "That sentence makes no sense." Truthfully, I probably was getting to the point and my sentences most likely did make sense.

Hi, I'm a chronic over-thinker. Nice to meet you.

To say that it's somewhat tiring to live with an over-thinking brain is an understatement. Yet, the cycle constantly churns, despite attempts to quiet those incessant thoughts. Below are just a few things all over-thinkers are tired of overanalyzing (but really, we just can't help it). 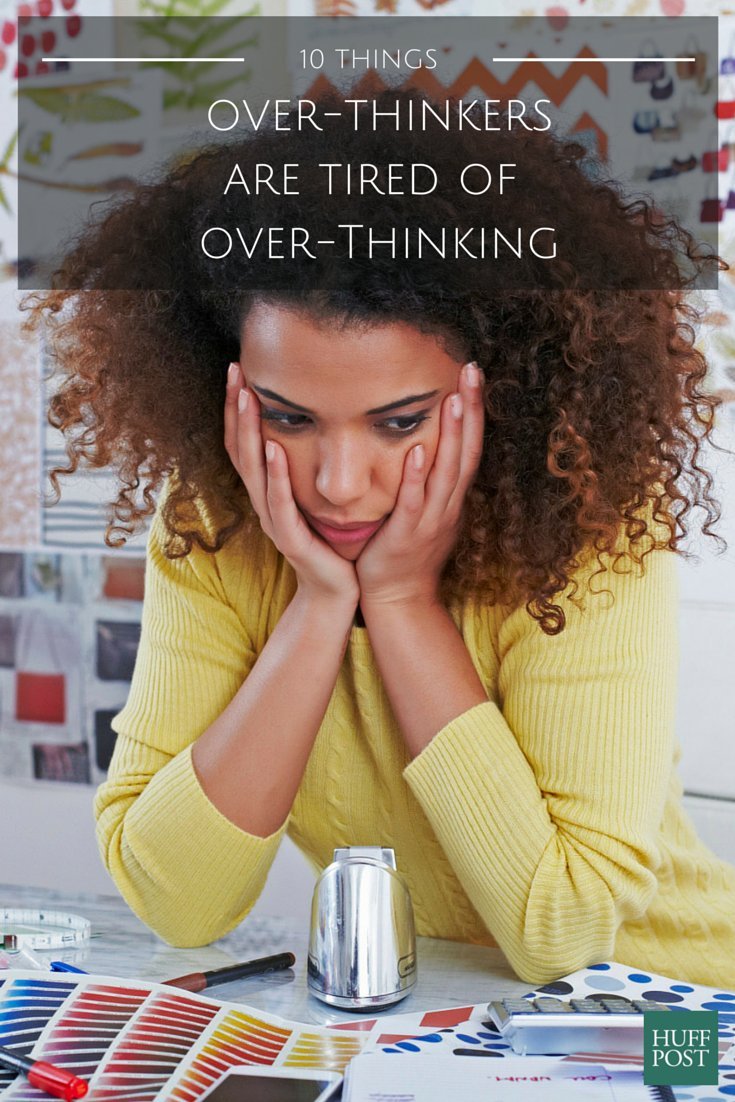 1. That text message from our significant other.
"I'm fine." What does that mean? Why a period and not an exclamation point? Over-thinkers are notorious for breaking down the anatomy of a text message, right down that last piece of punctuation.

2. That comment from our boss.
Logically we know a little criticism isn't going to get us fired, but we can't help but make a mountain out of a molehill when it comes to our work. But our extreme analysis may actually impede our performance. According to a UC Santa Barbara study, thinking too much about a task may actually be a distraction and affect the outcome. Yikes.

3. The first impression we just gave off.
"Did I laugh too loudly?" "Was I too opinionated about that Supreme Court ruling?" "Did I have something in my teeth?"

4. Our weekend plans.
Or any plans for that matter, because our indecisive nature comes into play. Don't even get us started on where to go for dinner.

5. That fight we just had with our friend.
You know those montages that happen in movies when two people are on the outs? Welcome to the front-row seat of an over-thinker's mind. Not only do we replay the strong words we exchanged, we also map out in our brains what could've happened had we said something different. That outcome is always much better.

6. Our painful breakup.
Failed relationships are basically our kryptonite. But take heart, over-thinkers: All that ruminating may be helpful after all. A study published in the journal Social Psychological and Personality Science found those who analyzed their breakup more often through a series of questionnaires regained their sense of self more quickly than those who did not. A pint of Ben and Jerry's isn't too bad, either.

7. What it means if our leg hurts or if we have a cold for more than a day.
See also: Hypochondria. (But really, if you're super concerned, please see a doctor.)

8. The tweet we just sent out.
Well, we thought it was funny but apparently the two followers we just lost didn't agree. Delete.

9. The worst case scenario.
For over-thinkers, "we need to talk" or "let's set up a meeting" may as well mean pack your bags. Our brains instantly dart to the least favorable outcome as a defense mechanism. However, research shows this negative or hostile thinking is hardly beneficial. A sour mindset has been linked to higher risk for stress and even some physical health conditions.

10. The fact that we can't stop overthinking.
Seriously. It's exhausting.

In all honesty, it's not a simple matter of "shutting your brain off." Over-thinkers can't help but get lost in the corners of their minds. But while we're working to "let it go" a little more (PSA: meditation helps), we wouldn't complain if you added an exclamation point rather than a period to the end of your texts. You know, just in case.

100 Ways To De-Stress
More:
thinking too muchhealthy livingoverthinkingpersonality overthinkers
Newsletter Sign Up
An essential daily guide to achieving the good life
Subscribe to our lifestyle email.
Successfully Subscribed!
Realness delivered to your inbox