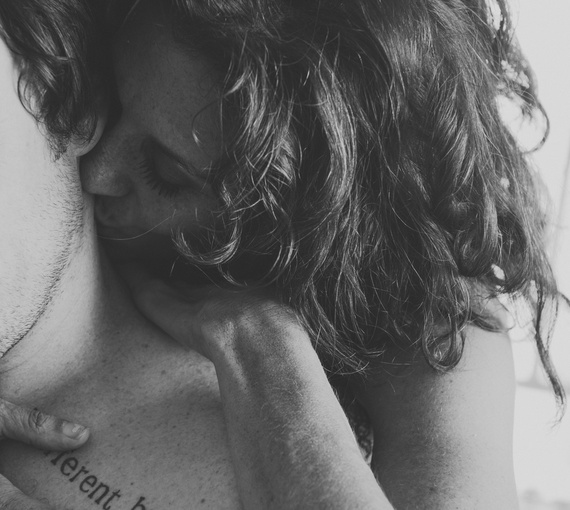 Recently someone who follows my Instagram posted this question on one of my photos:

"What is the first thing you notice in a man?"

I thought about it for a moment. Did I notice eyes? Hair? Smile? Shoulders? None of these answers seemed to fit. When I was younger, I tended to like men who were tall, thin, and dark-haired. But now, at 52, I don't really have a "type." At least, not a physical type. I gravitate towards men with a palpable sexiness. But just what, I asked myself, makes a man so sexy you can feel it emanating from him when he walks in the room?

I let my mind wander over images of men throughout my life who have made my breath catch, and my skin tingle, just by being in their presence. Sometimes I remembered how a t-shirt clung to one man's shoulders, or how another held my gaze unabashedly over a glass of wine. But mostly I reflected on the intangibles -- qualities, values, character traits -- a man must possess so that I want to send plates flying as I crawl across the dinner table and lower myself onto his lap.

These are 11 things I came up with:

1. Strength -- I don't mean how much a man can bench press, although a nice set of pecs doesn't hurt. I'm talking about internal-fortitude strength. Firmly-planted, I-know-who-I-am strength. There is nothing sexier than a man who's grounded, who's in command of the impulses and anger that may have derailed him when he was younger, whose quiet confidence telegraphs, without a hint of arrogance, that he has nothing to prove.

2. Vulnerability -- A man isn't strong unless he is also vulnerable. This means he can tell you what he wants, when he's afraid, how you make him feel, what he did that he's made amends for, what he's overcome, what brings him to his knees. Without transparency, there can be no genuine intimacy, that ingredient that makes sex remain sexy when the initial high of infatuation dissipates.

3. Integrity -- This ingredient separates the boys from the men. While they may dazzle in the beginning, womanizers, scoundrels, and narcissists use lies, cheap tricks, and smoke and mirrors for personal gain. There is nothing sexy about a man who pretends to be something he's not, who lacks any depth of feeling, and who doesn't care how much blood he leaves on the tracks. If you gave me a choice between bedding Don Draper and Atticus Finch, I'd choose that soft-spoken lawyer any day.

4. Intellect -- A beautiful mind is sexy. IQ points are great, but that's just a piece of smart. Critical thinking, an unquenchable thirst for learning, and a gift for distinctive self-expression create, for me, a kind of male siren's song. I don't care how gorgeous a man is; if he can't entice me with his mind, the sexual chemistry won't be there.

5. Sense of humor -- A man who lacks a sense of humor is like a cold shower on legs. It's impossible for me to connect with someone who's ultra-literal, hyper-serious, and rarely laughs. For me, intellect and humor are inseparable bedfellows. Smart people read nuances and see the humor in situations. And the brand of humor is critical. Even if a guy is hot, if his version of funny doesn't sync with mine, the sexy won't stay sexy for long.

6. Warmth -- It's exhausting trying to connect with someone behind walls. Compassion, empathy, a ready smile, an easy laugh -- these traits and actions are disarming in the best sense of the word. Kind is sexy. It just is.

7. Generosity -- Stinginess is a turn-off. Not only stingy with money, but also stingy with feelings. While squandering one's money and emotions indicate a lack of control or self-worth, counting pennies and withholding genuine contact suggest a preference for things over people. I've also found that stingy men aren't as good lovers as their more generous counterparts. It's not sexy to sleep with someone who holds back physically or emotionally in bed.

8. Affectionate -- Affection is warmth in action. A soft kiss on the back of my neck as he walks by. A palm reaching through the hole in my jeans to squeeze my knee. Laying his head on my chest because it's one of his favorite places to be. A man who loves touch for the sake of touch, whether or not it leads to sex, is sexy.

9. Mindfulness -- Not that long ago, I was attracted to men so ambitious that they appeared to be driven by motors. What I've learned is that that kind of "ambition" often masks insecurity, avarice, and aggression, qualities which are not remotely appealing. Mindfulness -- the ability to be aware and present in the moment, even if that moment is painful -- is the ultimate form of ambition because it requires a commitment to personal growth that is not for the faint of heart. A man who radiates quiet confidence, who is able to remain calm and centered in the face of challenges, makes me weak in the knees.

10. Partnership -- The only place I want to be dominated is in the bedroom, and that still requires my consent. In all other contexts I want a man who doesn't try to dominate me, who understands the need for compromise, reciprocity, communication, and respect. I have no time or patience for men who play games and control women in order to feel like men.

11. Sexual confidence -- True sexual confidence has nothing to do with penis size, smooth moves, and bedpost notches. It's an ambience distilled from quiet authority, an ability to read my body and my breath, a sensual lingering in the moment that may or may not involve gazing in my eyes, but always requires a desire to be vulnerable and present. A sexually charged man who is in command of his urges and firmly situated in his sexual expression will turn me into a breathless, perpetually aroused Alpha Submissive in no time flat.

Many of these 11 things didn't appear on the checklist I had when I was in my 20s. Back then I was seduced by slick businessmen with snazzy cars who traveled in packs. There's nothing wrong with someone who fits that description -- but razzle-dazzle wears thin quickly without substance to back it up. One benefit to being 52 is that I've finally learned what to look for in a man.