I have it on good authority that this was the advice my dad gave my husband on my wedding day. I can't argue with this. It's true. I'm a little high maintenance and high strung. And as much as I hate clichés (more on that in a minute), I'm a big fan of the phrase "don't sweat the small stuff."

When something bugs me or doesn't go my way, I always ask myself if it's going to matter in five years. Usually, the answer is no, so I move on to stressing over big stuff, like whether my hair looks pretty.

So, as tightly wound as I am, small things tend to roll of my back. If I can't control it, I'm not very likely to get overly twisted about it. So, when a friend challenged me to write down my "Top 10 List of Pet Peeves," I thought I'd struggle to come up with 10.

I was so wrong. I've got 10. I could even get to 11. I could probably get to "eleven-teen" the mythical number my son uses when counting. Eleven-teen is probably a lot, people. So, here we go. Ten things that make my head explode:

My hubby is a big time knuckle cracker. He is no-kidding knuckle cracking this very second. He probably subconsciously knows I'm writing about how much I hate knuckle-cracking, but to my naked eye, he looks like he's immersed in some science show.

I don't often tell casual acquaintances that knuckle-cracking bugs me, but oh how it does. I don't like to expose my underbelly (or my real belly, for that matter) and I imagine meetings full of rampant knuckle cracking if I reveal I hate it.

Brown-nosers. Sucker-uppers. Eddie Haskells. Oh, and if you know who Eddie Haskell is, you have to leave a comment on this blog post. I feel like I'm alone in my old-ness here, so help me out, k?

What bugs me most about clichés is that they are a cop out. People spout sayings like "God doesn't give you what you can't handle", or, "this too shall pass" without giving a thought to exactly what you're going through.

People who use clichés maybe don't know what to say or are afraid of saying the wrong thing. I would much prefer people to say something like: "Well, crap. That effing stinks. I'm so sorry your life sucks."

Once upon a time, when I was a single girl, I went on a date with a guy we'll call John. Mostly because his name was John, and I'm assuming it still is. I wasn't super attracted to John, but he was in the "maybe if I get really bored and desperate" category. Until I saw him eat.

First, he talked with food in his mouth. Second, corn flew out. It was like he had a little propeller in his mouth. The sh*t just spewed out while he was yammering on about ... well, I don't know what and I was just like ... AWWW HELL NO.

When you are breaking bread with someone you don't want to see projectile corn. It's not sexy. Ditto for lip-smacking, inappropriate burping, teeth sucking, teeth picking and all that stuff. Just ... no.

The fastest way to get me to click "exit" on what you're writing is to load it up with typos. If you don't have a rudimentary working knowledge of basic English, stay off my Interwebs. This goes for email, blog posts, Facebook statuses and such. In all seriousness, I can overlook some misspelled words and some dangling participles. I'm certainly not perfect.

I'm not the grammar police. Truth? I'm not even sure what a dangling participle is and I don't know what a dipthong is, other than it isn't underwear. All that aside, I don't read anything that clues me in to the fact that the writer doesn't give a crap about quality. Most people who have made it past third grade know "I" needs to be capitalized. LOL and IDK aren't words. If you're not texting me, don't use them.

Former smokers make the most militant anti-smokers. It's true. I smoked for a long time but now, I can't stand to be around smoke or be near someone who has just smoked or in a home or car where someone smokes. Ironically, I still miss smoking.

Personally, I dislike creativity in naming or name spelling. There is a limit to what you should slap on a kid to bear for life. Like Fifi Trixibelle or Kyd. Those are just too much, although I guess "hey, Kyd" might be sort of convenient.

I'll admit to being parking challenged but some people are just straight-up jerks. I'm talking about the need to utilize more than one space and parking so close to me that I've gotta suck it in to get in my car. This picture is of my car. I'm the cute little blue VW. I really miss that car. Before you start thinking I'm the ass, I was living in England at the time this craptastic piece of parking took place, so my steering wheel was on the right. Every once in awhile, it's super fun to climb in to the driver's seat via the passenger door. Not. 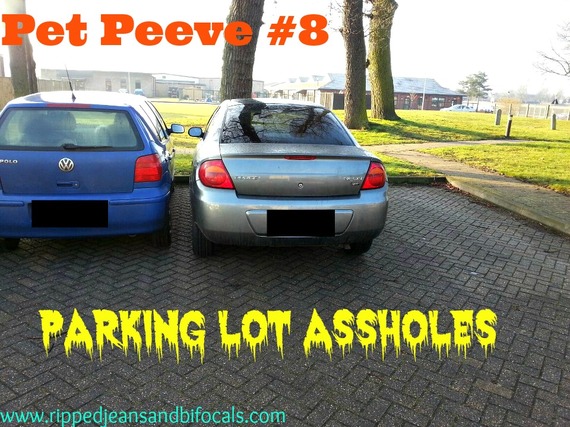 If I tell you I went to Starbucks, don't come back with "I went to Columbia." Nuff said. It's not always a contest

And for the finale,

This is a two-part peeve. I have a muffin top. It peeves me. Go away, muffin top. I'm sure the massive amounts of Doritos I eat have nothing to do with your presence. But seriously, people. My peeve with other people's muffin tops are when they don't know when to size up on their pants. If you've gained a few pounds, okay, cool. Well, not cool, but you know, life happens.

What isn't cool is how your size 12 butt squeezes in your size 8 jeans. Sure, you might get it all in there, but that "more of you to love" has to go somewhere, hence, the muffin top. No one wants to look at that.

I know honey. Maybe you'll lose that 10 pounds this year. But in the meantime, get some new jeans, k?

So tell me ... what really makes your head explode?