My first son was almost 8 weeks old before I realized he had colic. I hadn't spent much time around infants and I had no way of knowing whether all babies cried like my son, or if I was simply failing to calm him through lack of experience or some evolutionary failure of my maternal instincts. No matter how loud I sang, how energetically I danced, or how rhythmically I rocked him, my baby cried. He cried long and he cried loud and he cried constantly.

There was nothing wrong with my son, and certainly nothing wrong with his lungs. We were just experiencing the phenomenon known as colic, like many other families out there, and knowing we weren't alone gave me the confidence to continue dancing even though it hadn't calmed him for the last hour and a half.

When my second son was born, I finally understood why sometimes other mothers would look at me strangely when I talked about the hours of crying through the night and the fact that my son would only sleep for half an hour at a time in the day. They had no idea what I was talking about. They had easy babies, and now I'd finally seen how the other half lived: Every moment of every day wasn't a struggle to survive. Where's the fun in that?

For those of you who have never had the joy and the privilege of spending an extended amount of time with a colicky baby, I thought I'd do you (as well as the chronically sleep-deprived and nerve-frayed moms you are about to offend) a favor and leave you a few important tips on how NOT to help mothers of colicky infants.

Trust me, these women have been through months of the worst kind of psychological torture. You do not want to wander onto their bad sides, so here are 20 things you should NEVER say. Just to be safe.

1. Have you tried... [insert obvious or cliché parenting advice here]? You mean I'm supposed to feed him when he's hungry?!? Come on, people. We're tired, but we're not THAT tired.

2. Man, I'm so tired today. I only got six hours of sleep last night. Really? I can't remember the last time I slept more than an hour and a half straight. Six hours of sleep sounds like a luxurious vacation. Suck it up.

3. Ma'am, could you please quiet that child? The screaming is disturbing the other patrons. I'm sorry. Are we disturbing the two elderly couples who are eating at TGI Fridays on a Tuesday afternoon at 4:30 p.m.? Just wait until I whip my boobs out -- it's gonna be a dinner show.

4. Did you see the latest episode of Scandal last night? The only thing we use our television for anymore is watching YouTube videos of Liza Minnelli on repeat, because it's the only thing that keeps the baby quiet and ANYTHING is better than listening to him cry.

5. Are you feeling OK? You look pale. If you ever ask this question of a new mother, you should probably run and hope she's too exhausted and anemic to catch you.

6. When is the last time you showered? I'm pretty sure it was a Tuesday... but what month?

7. Cherish these times/They're only young once. Would you like to babysit?

8. You think this is bad? Just wait until he's 2. That's super helpful. Why not just punch me in the boob and run away?

9. Have you tried cutting gluten from your diet? I'm pretty sure that the foods containing gluten are the only things keeping me sane. Do not take away my cookies.

11. Can you babysit for me? Yes -- because if you haven't heard crying in stereo, you've never really lived.

13. Thank God those days are behind me. I'm not sure you've rubbed enough salt in my wound. Let me get you some lemon juice.

14. I'm sure he'll grow out of it... in a few months. Right now, a few hours seems like a lifetime. A few months might as well be an eternity. But thanks for the thought.

15. Childbirth isn't looking so bad now, is it? There are few things in life that are less appealing than 24 hours of searing pain. Pacing the halls for hours in the middle of the night for the 100th night in a row comes very close. Bring on the contractions.

16. I remember this one time my baby cried for a whole hour one night. You just keep telling me all about that harrowing experience. I'm gonna close my eyes for a few minutes.

18. Why don't you post more photos on Facebook? Because who doesn't love babies with puffy eyes, red, blotchy faces, and snot bubbles oozing out of their noses?

19. Honey, my parents are going to be staying with us for two weeks. That's a joke, right?

20. Weird, he never cries when I'm watching him. Then he's all yours.

I hope you've found some of these tips helpful and that they someday guide you as you carefully navigate the treacherous waters that are friendships during the first few months with a baby. Some of them may seem far-fetched, but I assure you I've heard each and every one of them at least once. Of course, it's not my intention to leave you with an entirely negative experience of colic. There are still a couple things that any mother with a fussy baby would love to hear. 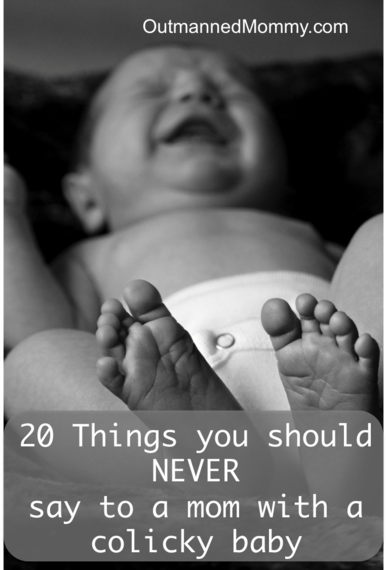 Once a cognitive psychologist in the field of memory, Mary Widdicks now spends the majority of her time trying to outsmart her three small children. The irony is not lost on her that she now frequently can't remember whether she fed all the kids in the morning. She started writing about her life as the only girl in a house full of boys in January 2014, and has since been featured on sites such as The Washington Post, The Huffington Post and Scary Mommy, and in several parenting anthologies. She has also been honored as a Voice of the Year by BlogHer in 2013 and 2014, and 2014 Badass Blogger of the Year by the Indie Chicks. In February of 2015 she gave birth to her first daughter, and she is now happily drowning in a sea of pink. Follow Mary on her blog, Outmanned, or on Facebook.