Ours is a blue planet. Water covers over 70% of the Earth's surface, and the ocean economy drives global trade, annually contributing around 3% or US$ 1.5 trillion to global value added. What's more, experts expect ocean-based industries to double this contribution to global GDP within the next 15 years.

But this growth comes at a price, and we find ourselves today at a crossroads.

Without a concerted effort to ensure the sustainability of the marine environment, mounting threats to ocean health could jeopardize the benefits of the seas for future generations. The good news is that it is still not too late to act. 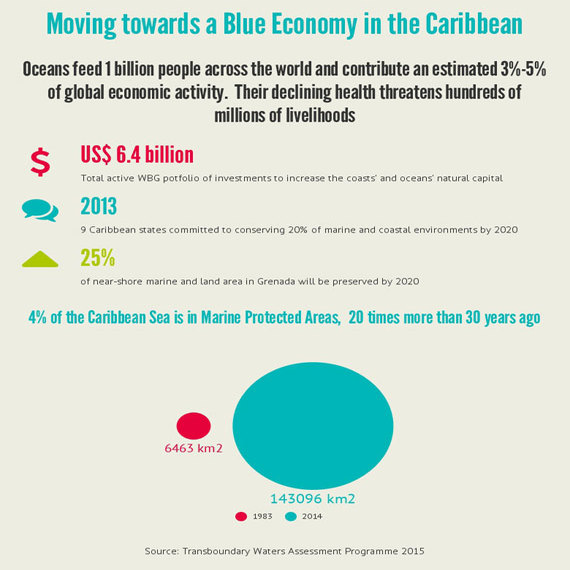 From Green to Blue

"Thinking green" was the buzzword of the past decade, as countries and companies alike woke up to their shared responsibility to sustainability. Now it's time to add another color to the pallet: blue.

The "blue" economy looks to balance ocean wealth and ocean health by sustainably managing ocean assets (e.g. fish stocks, coral reefs, etc.) and ecosystem services (e.g. coastal protection, the potential for carbon capture, oxygen production). And according to the new report by the World Bank Toward a Blue Economy: A Promise for Sustainable Growth in the Caribbean in collaboration with key partners including The Commonwealth Secretariat, the Organization of Eastern Caribbean States and the Nicholas Institute for Environmental Policy Solutions at Duke University, millions of people in the region could benefit. 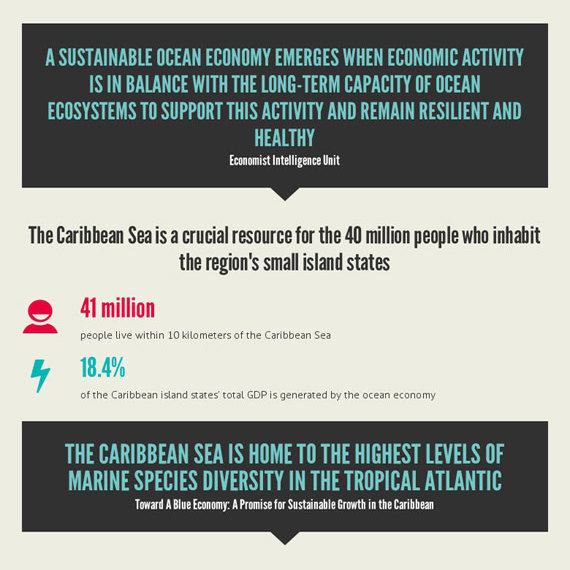 What needs to be done?

On land, mapping areas for spatial planning is common practice. It's unlikely anyone would consider building a highway through the most productive tropical forest in the world, for example. But under the sea, such divisions are less easy to manage.

The Mesoamerican reef is the marine equivalent of a terrestrial tropical forest. The longest coral reef in the world after the Great Barrier Reef, it runs directly below the Caribbean Sea and provide 60% of biomass for Mexico and the USA.

To put it simply, without coral, there would be no fish. And no fish means no food for millions of people.

And yet, this same ecologically important area is exploited by numerous sectors and users all with their own regulations, priorities and objectives. 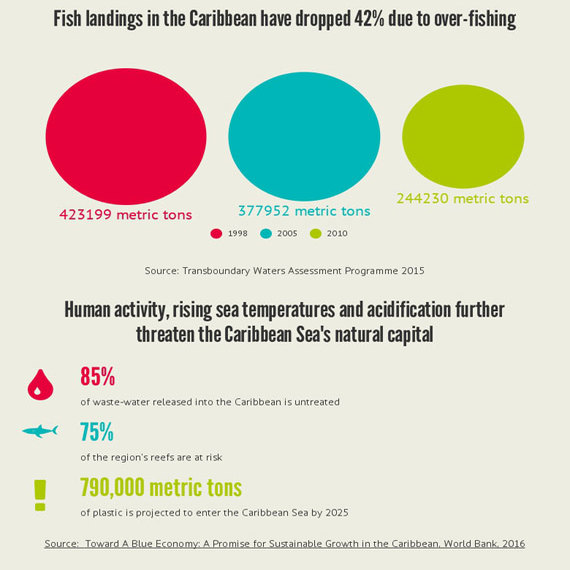 That's why mapping the ocean space and the area's natural capital needs to be one of the first steps towards a sustainable ocean economy. In the Caribbean, this marine spatial planning, as it's called, would categorize the sea area for particular uses.

While there is still a long path to tread, the nations of the Organization of Eastern Caribbean States (OECS), have already begun moving in this direction, developing an integrated governance policy for their shared ocean space, as well as committing that at least a fifth of territorial waters will be protected by 2020.

Ultimately, the blue economy isn't just about protection. Rather it's about ensuring the sustainability of marine ecosystems and their associated natural capital assets. This cannot be achieved without healthy ocean environments.

And since ocean health depends on much more than what goes on under the water, promoting the blue economy in the Caribbean will require cooperation between governments, private sector (both on and off land) and civil society.

It's a big task, but if we all get on the same page, it is not too late to act.

Stay up to date with the Caribbean's progress. Follow @wbcaribbean