Australian think tanks are among the least financially transparent in the world, according to data compiled by Transparify.

Researchers from the initiative, which promotes transparency and integrity in policy research worldwide, earlier this month visited the websites of twenty leading Australian think tanks and found that nine of those institutions provide absolutely no information about who funds their policy research and advocacy. The funding information disclosed by most of the remaining think tanks was minimal.

On a transparency scale of zero to five stars, Australian policy shops average just 1.2 stars, far behind their peers nearly everywhere else in the world.

In the United States, where think tanks have long played a prominent role in public debates and are widely thought to have significant influence on policy formulation, many prominent think tanks have become more transparent over the last two years. They thus seek to distance themselves from instances where some think tanks may have crossed the line dividing independent policy research from lobbying for special interests. 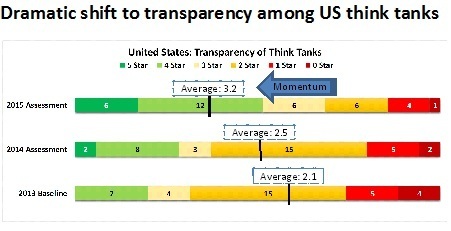 In Australia, by contrast, think tanks of all political camps remain opaque. Global experience shows that financial disclosure is the best way for think tanks to manage concerns about the influence of their funders and preserve the reputation of the sector as a whole.

Understandably, if it is impossible to discover who funds a given think tank, policy makers, journalists and citizens start worrying about hidden agendas.

In response to these concerns, a group of former think tankers, including myself, founded Transparify. Over the past three years, we have seen many of the world's most prominent think tanks become more financially transparent, disclose who funds them, and thereby signal their confidence in the intellectual independence and quality of their research and policy prescriptions.

Our work has gotten great resonance in the media (the New York Times highlighted our work on its front page), but far more importantly, many think tanks themselves have welcomed our effort to help policy makers and journalists to distinguish between the wheat and the chaff in the think tank sector.

Dozens of serious institutions worldwide have recently opened their books to signal their belief that as democratic players, think tanks should not be taking money behind closed doors. 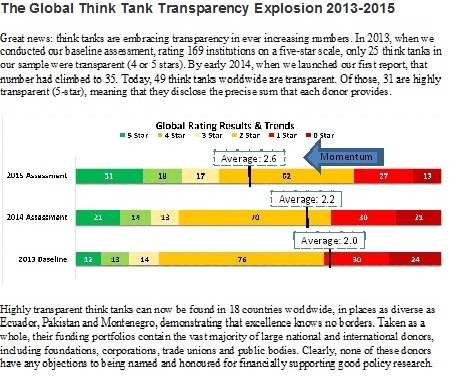 To be clear, all think tanks need funding to operate. It is perfectly acceptable for donors - individuals, corporations, unions, governments and foundations - to fund think tanks. Their contributions can and often do support valuable research. What is not acceptable is for that funding relationship to be opaque.

This year, Transparify is focusing its efforts on Britain and Australia. (So far, nine British think tanks have already told us that they plan to disclose more funding information online.)

Over the coming weeks, Transparify will contact Australian think tanks and encourage them to disclose online who funds them, with how much, and for what purposes, and offer to assist those willing to become more transparent.

In November, we will revisit their websites to check who is becoming more transparent and who is not, and publish the updated rating results for each individual think tank.

Leave a comment below, and make sure to include the average number of stars on a scale from 0 to 5 ("X.X") that you expect Australian think tanks to collectively achieve by November. Remember, right now the average is just 1.2 stars.

The closest estimate will win an honourable mention in a follow-up blog on this site announcing Transparify's final rating results for Australia.

Note: This post was first published on the On Think Tanks blog. The closest estimate across both sites will win the honourable mention.