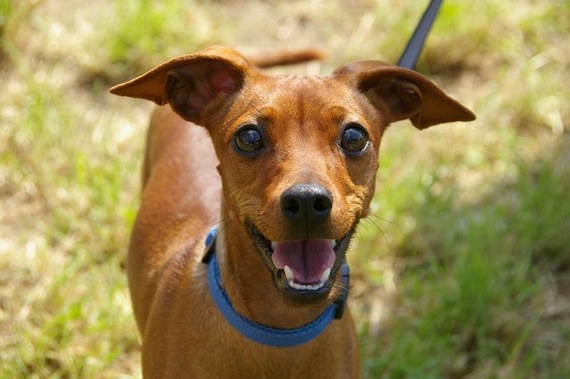 Our country's long love affair with the systematic castration--known as neutering--of male dogs (as well as other domestic species) is coming under close scrutiny these days. Recent studies showing the pronounced developmental effects of pre-mature neutering have many people thinking twice before cutting off their dog's testicles. I know I did.

Last week, after reviewing the growing research against the invasive, organ-removing surgery, I took our youngest rescue, Gadzooks, to a Zeuterin clinic at Adopt-a-Dog in Armonk, New York. Zeuterin is an FDA-approved, non-surgical sterilization procedure for puppies ages 3-10 months. Proven to be both safe and effective, the injection is similar to receiving an inoculation and allows a dog to be back on their feet within an hour. There are generally few complications, which are detailed below.

Say what? That sounds a little too good to be true. If you're like me, you might be wondering: how does it work, and why haven't I heard of this procedure before? The photo below offer a quick clue. Study it on an empty stomach.

Before we delve into the nitty gritty of sterilization methods, let's look back. Long before these practices were used on our pet populations, people used castration for everything from signaling victory in tribal conquest to marking status in ruling kingdoms. In 1778, Thomas Jefferson passed a bill in Virginia enacting castration as a penalty for certain crimes.

Early observations of castrated men showed side-effects like reduced bone density, muscle mass, and body hair development. Many of the men were said to assume more serene dispositions but also claimed to have developed depression.

But enough about us, what happens to castrated dogs?

Interestingly, there are no legitimate scientific studies that demonstrate the behavioral effects of castration on dogs. A lot is assumed. Intact dogs are said to roam and mark and be more aggressive. While some statistics show that 80 percent of all dogs found on the side of highways are intact males (presuming they've roamed from home), new research shows that aggression--which has always been the strongest selling point for testicular removal--may actually be worse after the procedure, which has been shown to increase anxiety levels. While male-to-male dog aggression is more pronounced in intact dogs, it's unclear if training and early socialization would help reduce those tendencies. All this, and to muddy the water even more, female dogs also mark, roam and show aggression, so go figure.

On the other hand, there are health risks involved with neutering, especially when this surgery is performed on dogs who haven't reached physical maturity (1-2 years of age). The AVMA (American Veterinary Medical Association) informs that this procedure "can result in increased risk of health problems such as incontinence and some types of cancer."

Other health risks that have been linked to studies targeting certain breeds where premature castration--and the consequent elimination of the vital hormone, testosterone - include:

If castrating a dog has this many adverse side effects why is it still happening? Most importantly, why are our country's leading rescue organizations sterilizing their puppies as young as seven weeks of age, risking sedation and removing organs that produce a major growth hormone (testosterone) -- especially now that there is a viable alternative? While one can understand the urgency to stave off the sad overpopulation issue, don't we owe our beloved pets a little more? These are not farm pigs we're talking about--these are our dogs who, in most households, are revered like children.

I spoke to my friend and colleague, LA's premier veterinarian and TV personality, Dr. Jeff Werber, who regularly practices both traditional and alternative sterilization procedures, i.e. Zeuterin. "Neutering eliminates all but trace amounts of testosterone from the dog's system; Zeuterin, while it effectively sterilizes a dog, only reduces testosterone by about 50%." As a means for population control, he feels both are effective. The key differences are that neutering requires anesthetizing, "the most dangerous part of any procedure," whereas Zeuterin, an in-office procedure, is fast, does not require full sedation and is thus less expensive. He finds the new practice of pre-mature neutering in our shelter system puzzling. "Zeutering is the answer here! You sterilize the puppy using a non-invasive, safe procedure that will not handicap their physical growth! Down the road, if the dog develops behavior problems related to increased testosterone - like marking, roaming, or aggressive tendencies - you can neuter then."

Again the question: Why wouldn't everyone--from the AVMA to our country's leading humane organizations - jump at effective, organ-sparing, hormone-salvaging options for population control?

While the AVMA has taken notice, Dr. Douglas G Aspros, a former president and spokesperson for the AVMA, says they're reluctant to adopt non-surgical neutering procedures, such as Zeuterin, as their primary method of sterilization until more research has been completed on its long-term effects. He, on behalf of the AVMA, suggests dog lovers speak to their veterinarian regarding the best option for their pet.

After mindfully considering my options and speaking to my veterinarian, I chose the FDA-approved Zinc Gluconate sterilization, known as Zeuterin, for my own dog.

Upon arriving at the clinic, I was able to observe the procedure and speak with representatives from Ark Sciences, who both distributes and certifies doctors to administer the serum, as well as the attending veterinarians (Dr. Mortsakis, NY Vet Practice, and Dr. Carr, Greenwich Animal Hospital). Handing Gadzooks' leash to the technician, I watched the procedure as both a fascinated journalist and a compassionate dog mommy.

After inducing light sedation, Dr. Ben Kagen, the preforming veterinarian from Adopt-a-Dog, measured each testicle to determine the dosage, then tenderly injected the sterilizing serum into the center of each globe. It took no longer than a traditional vaccination. Zinc is normally needed for maturation of sperm, but in the concentration used in the serum, it destroys the seminiferous tubules. Over 4-6 weeks, the healing process creates scar tissue that effectively blocks the movement of sperm outside of the testicle. Testosterone producing cells are spared and continue to produce testosterone for metabolic functions, although at lower. 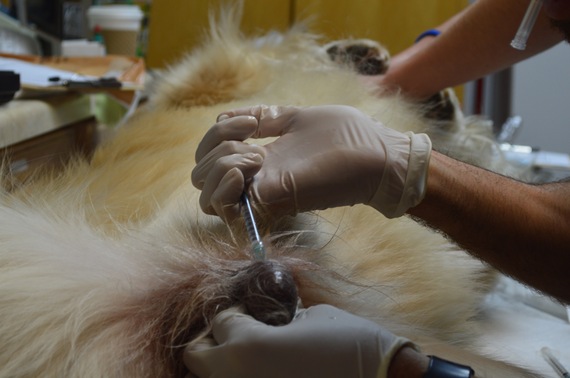 At the end of the procedure, a small tattoo - looking more like Harry Potter's lightening bolt than the intended "Z" - was imprinted on Zookie's abdomen. The technician then carefully reversed his sedation, explained that side effects could including grogginess, licking, and swelling at the injection or tatooed site, and sent us on our way.

The next day, I phoned Sandeep Manchanda, a partner at Ark Sciences, to ask his opinion as to why this revolutionary method for effective sterilization was not more openly received, especially by rescue organizations. "It's perplexing," he replied. "After it was approved in 2014 we were expecting a lot of interest, especially within the humane organizations as a solution for population control. Their current practice is to neuter their male pups as early as 7 weeks of age, even though research is showing an increased risk of orthopedic issues, bone and other cancers as a result. Instead we got resistance. Concerns about aggressive behavior, even though it is not supported by existing research, is a big barrier. Lack of quick adoption of an FDA-approved procedure by influential organizations like Humane Alliance and ASPCA creates question marks in people's minds as well. We are assuming that studies comparing castration with Zeuterin will show the impact it can have.

While questions and demand for research continue in the US, the same formula remains approved for dogs of all ages in Mexico, Bolivia, Colombia, Panama, Ecuador, and Turkey. It is also approved for cats in Colombia."

As research reveals the serious health conditions that result from castration (at any age), neutering is coming under review, with many of our country's leading veterinarian scientists and thinkers are taking a stand. Marty Becker, author of 22 books (3 New York Time best-sellers) who is referred to as "America's Veterinarian," endorses Zeuterin - -the only product he has ever endorsed: "Zeuterin...has the potential to revolutionize how we care for our dogs...and has to be a powerful weapon in the fight against pet overpopulation."

Slowly, this and other organ-sparing procedures that allow dogs to maintain healthy levels of testosterone are gaining popularity, although concerned veterinarians still question the increased risk of adenomas (benign tumors), fistulae (cracks in the internal passageways) and testicular cancer. In reply, Zeuterin researchers report that in each case, the recurrence rates are so low that they are not worth the anesthetic risk for prevention. As for testicular cancer, the rates are at 2% and can be treated by castration 90% of the time. In comparison, neutering is shown to double or triple the overall cancer risk in other areas of the body.

Tinkering with the body of any animal has consequences. While neutering has long been the salvation of domestication in the U.S. (versus European countries that view the procedure as cruel and inhumane), it's time to consider other options for sterilization. In the end, only you can decide what's best for your dog.