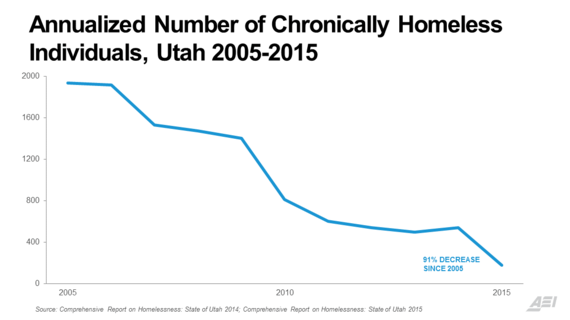 Utah has reportedly reduced chronic homelessness by 91 percent over the past decade, and the state now serves as the country's poster child for how to end homelessness. Media outlets have retold its success story countless times (for example, see LAT, NPR, WaPo, Bus Insider, NBC, Huff Post and Mother Jones), and lawmakers from across the country cite Utah as a model for their own efforts. Even the Daily Show with Jon Stewart traveled to the state to report on its success.

So how has Utah apparently solved a problem that has defeated most other states? It gave homes to homeless people.

More precisely, Utah provided permanent housing and supportive services to chronically homeless individuals—those with lengthy periods of homelessness and mental health or substance abuse problems. Although overall homelessness has actually increased slightly over the past decade in Utah, such a large reduction in chronic homelessness is still an impressive achievement. But is it real?

Unfortunately, no. I spent some time studying Utah's data and found that the miraculous 91 percent reduction in chronic homelessness appears to be driven by changes in how people were counted, rather than by how many there were.

The first problem with Utah's numbers is shown in the graph below. Utah conducts a count of its homeless population on a single night each January. But instead of reporting this "point-in-time" count, Utah annualizes it first. That means that the actual count is adjusted upward to reflect the fact that some people who were homeless at some point throughout the year were not homeless on the night of the count. 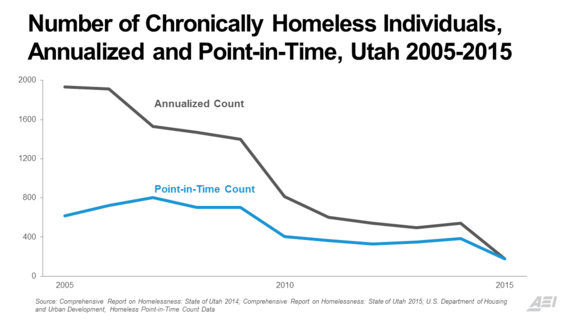 There's nothing wrong with annualizing numbers. But Utah was inconsistent. For example, the point-in-time count of chronically homeless individuals was doubled in 2009, but it wasn't adjusted at all in 2015. That means that a portion of the reported reduction in chronic homelessness is based on changing math instead of a changing reality. 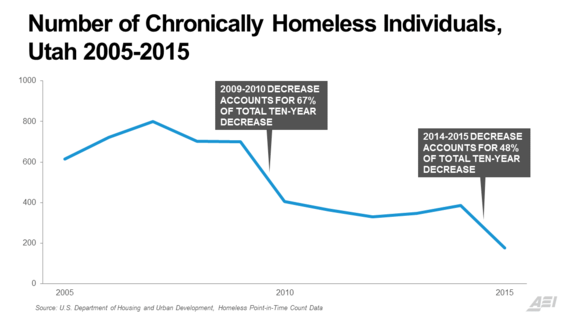 If you take the actual point-in-time counts reported by Utah to the federal government, and if you remove the two time periods when the changing numbers were driven largely by how the chronically homeless were classified, then chronic homelessness in Utah wouldn't have fallen at all over the past decade. There may of course have been other methodological changes that could have masked actual decreases. But the miraculous story of a 91 percent reduction in chronic homelessness appears to be fiction.

This doesn't mean that Utah has failed its homeless residents. It just means that the state's data have been used to spin the tempting but unrealistic narrative that ending homelessness is as simple as giving homes to homeless people. Cities like Seattle, Los Angeles and New York are looking for answers amidst unprecedented levels of homelessness. They need real solutions.

To be fair, Utah has done a lot of good things. The state has rightly focused most intensely on the homeless who sleep on the streets and who have serious problems with mental illness and addiction. Hundreds of people have been moved from the street and shelters into housing. Whether the overall numbers have plummeted the way Utah reports should not distract from these positive steps.

But for cities thinking of borrowing the Utah model, more needs to be done. Additional focus should be placed on transitioning people out of expensive supportive housing and into housing of their own or with family members when their well-being improves. This will free up resources for additional needy people in the future. More accountability should be placed on service providers for helping people overcome addiction, find work and rebuild connections with family and community. Engagement with services shouldn't be required for homeless individuals to receive housing in the first place, but when appropriate, actual requirements that encourage personal improvement can be phased in over time.

It's time to come clean. The unrealistic narrative that Utah has ended homelessness by giving out homes is not helping. What's needed is a real commitment to the hard work of not only getting people off the streets, but helping them to reach their full potential and move on with their lives as well.