The Ancestry team recently returned from the Tom Joyner Family Reunion in Orlando, Florida, where they had a fantastic time watching people's excitement as they saw family names they recognized -- or maybe had never seen -- appear on U.S. census and other records. Some African Americans may think that researching their family tree is impossible beyond 1870, when all of our ancestors were free and therefore listed by first and last name in the federal census. If you descend from a black ancestor who was freed before the Civil War, she or he would have been listed in the census by name, and in other documents, just like any other free person; but slaves were not, making it extraordinarily difficult to trace them in the era of slavery.

But don't let that deter you from searching for your ancestors! On Finding Your Roots, we have had extraordinary luck tracing African American ancestry deep into the slave past, sometimes even back to the 18th century! In fact, in this column we're going to give you three reasons for every African American to begin the exciting search to find their own roots.

If You Don't Look, You're Missing Something

Some of the most fun the Ancestry team had at Tom Joyner's wonderful Family Reunion was looking up records for teenagers who wanted to know more about their families. One wanted to learn more about her grandmother and great-grandmother and on back as far as she could go. She had never met her grandma, but she knew her name: Gorema Nichols. An unusual name like Gorema can work for or against you, depending on how people spelled it. After some false starts, a search finally came up with a 1945 Florida state census record for Goreme Nickles.

There's Grandma -- but she's not living by herself. She living with her parents and siblings, and it turns out that Gorema had been named after her mother, our new friend's great-grandmother. Almost every record has more than one thing to tell us, and many list multiple generations of ancestors on your family tree. In other words, one discovery leads to other discoveries, like links in a chain--the chain of your own ancestry.

Which brings us to our second point: there are strategies for getting over "the slavery wall," which is what genealogists call the 1870 census, again, since our enslaved ancestors, being treated as property, were not identified by their first and last names in most documents prior to 1870. Some 388,000 Africans were brought directly from Africa into the United States as slaves, and virtually all African Americans have enslaved ancestors in their family tree, even if their family trees also include ancestors freed before the Civil War. (Remember, the number of ancestors on your tree doubles with each generation, so you have 4 grandparents, 8 great-grandparents, 16 great-great-grandparents, and 32 third great-grandparents, so you are tracing a lot of potential ancestors by the time you get beyond the Civil War.) The 1870 census is the starting -- or end -- point for African American genealogical research precisely because you are most likely to be able to connect yourself to your ancestors who were alive when that census was taken. Getting beyond the year 1870 is the challenge, as is finding your place of origin in Africa. While you may not be able to find an ancestor in the census who was born in Africa, today we can use DNA analysis to establish your African genetic origins. (More on that later.) But as for the paper trail, there a several sources for finding the names of your ancestors who lived during the time of slavery.

For example, here's the Banks family, living in Madison County, Alabama, in 1880. The head of the house is Esex Banks, age 38, and his wife, Phillis, is listed as being 20 years old. If these ages are accurate, both were born before the ratification of the 13th Amendment, which we all know, thanks to Steven Spielberg's great film Lincoln, was the constitutional amendment that actually freed all of the slaves.

And there's more. As we read down the entry, we see they have two daughters and a son living in their home, all born after slavery. But then comes Sallie, Esex's 65-year-old mother. Now we're back to a birth date of about 1815! And there's one more to go: Esex's 85-year-old grandmother, Suckey, whose parents were born in Virginia. Information on the census was self-reported, and without birth records, ages may not be 100 percent accurate. This record also does not tell us if any members of the family were enslaved. But it does give us 4 generations of one family with names and possible birth years and places potentially going back all the way to the year 1795, when George Washington was president of the United States! That's amazing when you think about it! The 1870 and 1880 censuses in particular are full of names of people who were once slaves. In this case, we found three generations of the Esex family that may have experienced slavery.

Some records, like Elija and Jane Butler's, will even report Africa as a birthplace, which is a very exciting thing for an African American to uncover:

Again, this doesn't tell you where in Africa your ancestor came from, but DNA testing can give you a much more accurate sense of where all of your ancestral lines trace back to on the continent. 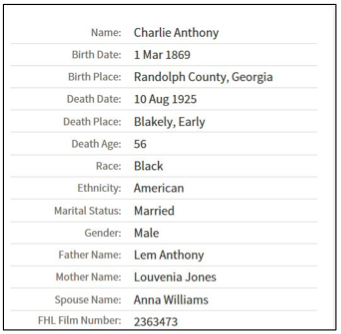 Charlie Anthony died in 1925, well into the 20th century. His birth date is listed as 1869, but his parents, Lem Anthony and Louvenia Jones, would both have been born well before the end of the Civil War.

Wills and probates, emancipation and manumission papers, and slave schedules are other records that help you get back further into the 19th century. Ancestry also has a free guide to African American research that outlines additional sources and strategies. The main point is your family doesn't stop--or begin, rather--at the 1870 census. Records may get thin, but don't give up before you even search.

Finding Your Home in Africa with DNA

So what if you aren't among the small percentage of people who find a census record that lists Africa as a birthplace for one of their ancestors? Remember, the slave trade was illegal starting in 1808, so most former slaves who were alive in 1870 would have been born in the United States. But even if you do find an ancestor who said they had been born in Africa, Africa is a very large continent, not a single country like France or England. And our ancestors mostly came from a variety of locations all along the west and west-central coasts of the continent. That's where DNA testing comes in.

DNA testing will provide two different sets of results. The first is an ethnicity estimate, also known in genetic circles as "admixture," which predicts where in Africa, Europe, and elsewhere your various ancestors originated over the last 500 years or so. (This test will also give you your percentage of Native American ancestry.) On average, Americans who have taken the AncestryDNA test and identify as black will have four different areas out of the nine identified from Africa appear in their ethnicity results. DNA testing may be the best way, and is often the only way, to trace your roots back to a specific area or people in Africa.

A DNA test will also compare your test results to the results of everybody else who has taken the test, looking for genetic matches, or "cousins."

At the Tom Joyner Family Reunion, four members of the cast of the 1970s sitcom Good Times took an AncestryDNA test -- including John Amos, who played Kunta Kinte on Roots -- and are waiting for their results.

In African American Lives, we tested my friend Tom Joyner, and his results were quite fascinating: he was 62 percent sub-Saharan African, 35 percent European, and 3 percent Native American, while his y-DNA (his father's paternal line) matched males living in Scandinavia and the United Kingdom, especially Ireland. Fully 35 percent of all African American males trace their paternal genetic ancestry to Europe, rather than to Africa.

My own results are also eye opening. Like Tom's, my father's paternal line traces straight to the United Kingdom, in fact to Ireland. And my admixture percentages are even more surprising: According to AncestryDNA, I'm 50 percent African and 48 percent European, with less than 1 percent Native American, which is a surprise to my cousins! My African genetic heritage breaks down among the following regions:

Since these are all key areas in the slave trade, this result is not a surprise. All African Americans reflect in their genomes the great diversity of the points of origin of their African ancestors.
With scientific advances like DNA testing and new records coming online every day, there's never been a better time for an African American to start uncovering the story of their own past. And judging from the hugs, screams, and high fives the Ancestry team got in Orlando, it's never been more exciting, either.