Sitting on the murky floor at the Belvedere Park front office in East L.A., tethered to the one outlet I can find through which to charge my overworked iPhone, I wonder to myself "What the hell am I doing here??"

The girls are late. Again. I lean up against the Out-of-Order Pepsi machine and call them. Again. The girl I am chauffeuring is secretly pleased the other ones seem to be flaking -- she's dying to get out of there -- after all it is a Friday night, she graduates high school in less than a week and she has major adolescent intrigue to chase. Interviewing someone's uncle, the soccer player, is just not as immediately appealing. When I call yet again, the robotic voicemail voice doesn't even bely whether I have been given the right number. In the end two of the girls -- the ones with the camera equipment -- never show up. 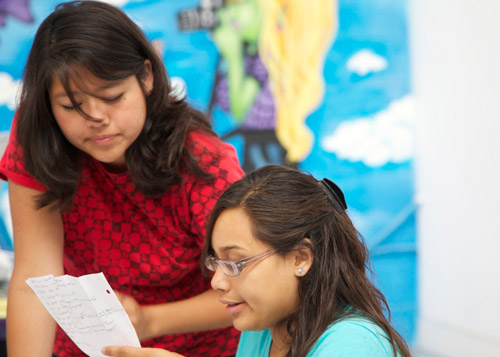 Rocio Ortega and Edith Romero work on their upcoming report.

Being the National Program Director of Global Girl Media could politely be called a mixed blessing. On the one hand, watching eight teenage girls absorb and expand into the roles and responsibilities being demanded of them is like eating chocolate cake covered in fresh whipped cream - fulfilling. On the other hand, having to wrangle, cajole, scold and worry about eight teenage girls is giving me grey hairs and a weird eyelid/upper cheek twitch that has not gone away in three weeks... in a word-- STRESSFUL. 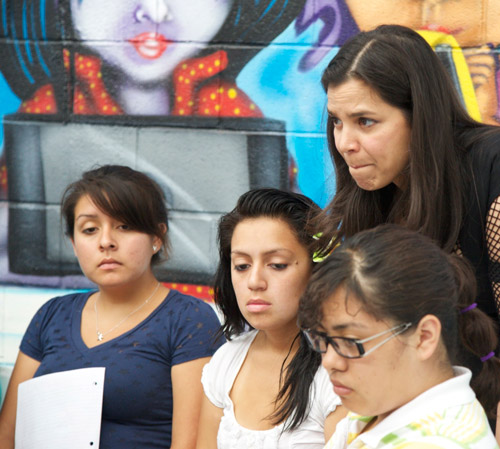 Kamala worries about something while the Global Girls wisely focus elsewhere.

GlobalGirl Media is the brain child of my friend, Yale classmate and fellow filmmaker, Amie Williams. Amie decided, after a young girl she had been mentoring in Kenya was gang-raped, to dedicate her considerable talents and willpower to the empowering of young women in underserved communities. She is determined to give them the tools and training to speak their truth, tell their stories and develop their voices. 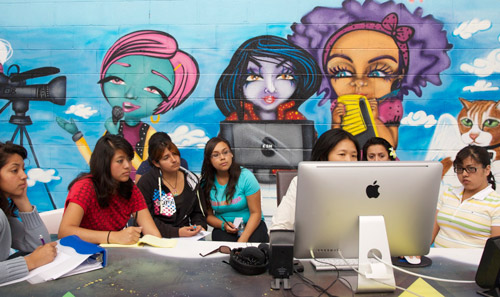 Editor Ann Kaneko teaches the girls how to shape their stories.

The goal of GlobalGirl Media is to open News Bureaus all over the world, connecting young women through new media and giving them the space and tools to create a network to educate and support each other. I believe, as do all of us who jumped on board to help Amie realize this dream, that this will change the world.

I had been doing some work with East L.A. and South Central "at-risk" girls and we agreed that it would be a good fit for me to oversee the creation of the local arm: GlobalGirl Media Los Angeles. Don't get the wrong idea here - I am not a teacher. My mom is a teacher. My sister is a teacher. I have loved, admired and been deeply affected by teachers throughout my life. But I am not one of them. I am ridiculously impatient and can't stand repetitive tasks or sticking to a particular daily structure for any length of time. So I certainly didn't plan to teach.

What I did plan to do was put together the program: find the space, the instructors, the girls, the meals, the transportation, the editors, the computers, the cameras -- put the whole thing together and get it up and running well. This, I thought, I can do - I've done it before. It's just like making an independent film, right? All you need is chutzpah and a timeline. Never mind that there is no funding yet -- I can do this. And, with the help of an incredible team of supporters, I did.

But what I never counted on was that somewhere along the line -- when the girls became more than theoretical, when they became Edith and Brenda, Maria and Diana, Martha and Jessica and Rocio and Sussete -- I was going to have to find the patience too. And maybe even accept that I am in fact, some kind of a teacher now. 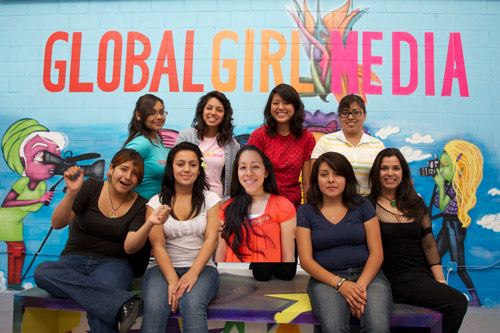 I've been with them for six weeks and... they have started filming! They are blogging and pitching, writing, shooting, interviewing and helping edit and you can see their reports on our GlobalGirl Media website as well as KCET's site. I hope you'll give them a chance to tell you their stories - in their voices.