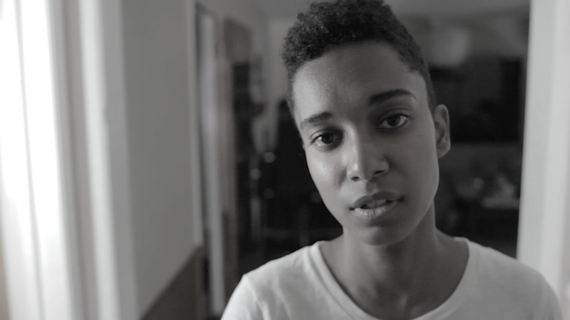 Charo Molina is constantly evolving. Charo Molina is a Pokémon. Or at least, that's how she described herself to me. Her default is kindness, humor, and empathy. Her language is music, but above all she's blunt. "Black. Hispanic. Cis female. Queer. Weirdo. Goofball. Those are some of the labels I currently use to identify myself," says Molina. I sip my coffee as I type this piece, but stop to start "Nothing Left to Love" over again. It's a song that Charo wrote, and it's what drew me to her. I was surprised mostly when my girlfriend shrieked about having a new twitter follower. Before I could ask who it was, I heard music coming from the speaker of her iPhone. "Who is that?!" I queried. It was a force of energy, otherwise known as Modern Huge.

"In terms of writing songs, playing guitar, and performing for people, I've been doing that on and off for 15 years now. In all honesty, music has been something I've been involved with in one way or another my entire life," says Molina. She comes from a a family of singers, musicians, and dancers. "It had never occurred to me that I might want to do it professionally until Nelly Furtado's "Whoa Nelly" happened. Up until then, I saw music as very segregated," she says. All it took was seeing her hero in concert to make her realize that this was something that called to her. So Charo shifted focus. In the process of change, she also thought it would be more wise to walk slow, because it was important for her to stay balanced on the beam of her life.

It was also important for her to keep her pace reasonable, which resulted Charo taking five years off from music. She was struggling to reach her goals. "Recently, I've slowly figured out that it's stress and anxiety that make everything feel overwhelming almost immediately," she explains. She's desperately tried to avoid falling into an American Go-Getter™ archetype which she describes as possibly harmful to herself and her dreams. "If you can go full throttle towards your dreams, I envy you. That's not me. It would physically destroy me," she says as she opens up. It's not always butterflies and rainbows chasing your dreams, and Molina may know that better than most. Above all, she fears the mundanity of routines more than she desires the plastic success many chase. She fears a soul-crushing day job that lights a fire under her. "I don't want to make money doing things that don't excite me anymore because that feels like wasted time," says Molina. "Time is the most valuable resource." Beyond performing, she talks about her dreams to repair guitars and possibly build pedals. She says she has recently purchased her first soldering iron. To me, this idea sparks a bigger conversation.

Despite bumps in the road, I encourage Charo to remain optimistic. Now is the time, more than ever, for Queer women to take over the throne in the music industry. Just look at St. Vincent's Annie Clark. She just recently released a guitar with the famed Ernie Ball guitar company, which has done fabulously. However, there was backlash from sexists who believed that the guitar was a marketing ploy. All because of the framing of a dozen articles like this, that spun the guitar as an "instrument designed for breasts." The sexualization of this collaborative effort from her and Ernie Ball only better paints a picture of the audacity Queer women face in the world of Guitar. Annie is a Grammy award winning guitarist who designed a rad guitar that is comfortable for everyone. Including women, with breasts. (Sorry, Telecaster). However, Annie ultimately walked away the winner, because women everywhere including myself are infatuated with her creation. We've always been edged out of these conversations. That's why it's important to support artists like Charo. The ones who speak beyond the gendered labels that fall on musicians. After all, she describes herself as a Pokémon. Maybe that's just fine.