For a long time, I resisted change. It made me nervous.

I mean, don't get me wrong, I totally wanted things to change. Or better yet, I knew that they really had to. I just didn't know quite how to go about it.

Check that. That's a lie. I knew exactly what needed to be done. I just didn't have the balls to do it.

So for what, at the time, seemed like an eternity, I kind of teetered at the edge of a big cliff of indecision. Because there were a lot of things I really liked about my life. I got the family that I really wanted, the multitude of children. I loved our house with the pool and our big golden retriever. We lived in a nice town with great schools where I got to help make pilgrim costumes out of brown paper shopping bags for the Thanksgiving feast in second grade and hot-glued pennies onto a baseball hat to celebrate the 100th day of school. There were dinner parties and tennis lessons and piles of presents for Christmas.

On the outside, it was all so fucking perfect.

But inside -- I probably don't need to tell you -- it was a different story. There was sadness and regret. Anger and resentment. People doing shit they probably shouldn't have been doing along with people not doing the things that probably really needed to be done.

But we suffered in silence. Literally. The silent treatment was an often-used tool for conflict non-resolution around here. Because what were the options? I mean, I guess I had a pretty good idea what they were, but they were big and scary and things that other people did, but not me.

But then, as luck would have it -- although I did not think of it as very lucky at the time -- a series of events occurred that gave me the kind of push I needed to make the leap into the unknown.

I said I wanted a divorce and things began to unspool.

Not long after that, I took my four children north to stay at our friends' place in Vermont for a few days. The kids swam at a local waterfall and we ate sticky cinnamon buns at our favorite farmer's market. We made the windy drive up Mount Equinox and passed monks walking along the side in flowing white robes and arrived at the top to find it shrouded in a thick layer of fog obscuring our view. The kids swam at night in the condo complex's indoor pool, running along the tiled deck before diving in while I sank into the steamy water of the hot tub, letting the bubbles swirl around my neck as I considered the Pandora's Box I had just unlocked. All of the shit that I had unleashed.

One day we drove over to the quarry in nearby Dorset and dove off the big blocks of marble into the icy green water below. The swimming hole is bordered on a few sides by cliffs of varying heights, which the more intrepid visitors leap from into the 60-foot deep pool. We ate our sandwiches and watched people of all ages -- parents, teens, kids -- stand at the top and contemplate the fall while others shouted words of encouragement from the comfort of their picnic blankets below.

Some recklessly flipped backwards off the 20-foot cliff like it was nothing while others sheepishly made their way back to the bottom on foot.

"The girls should do it together," announced my oldest daughter and the three of us picked our way up the dirt path that led to the top of the cliff and looked down.

Now, what some of you might have already surmised, is that things look a lot less threatening when viewed from a distance. When considered in theory. But when you're standing with your feet dangerously close to the edge of a cliff and there's nothing between you and some really dark, cold water but 20 feet of air, you start to lose your nerve. Well, that's if you're like me. I started to rethink my earlier bravery and weighed the embarrassment of retreating down to my blanket in defeat versus falling into a protruding ledge of marble on my plummet down or hitting the water at a bad angle. There were a million things that could go wrong.

"Don't overthink it!" yelled one of the parents standing below who watched me move close to the edge and then back away.

We debated whether we should jump at the count of "three" or the word "go" while my oldest son stood below and shouted for us to hurry up, tired of having to wait for us to jump and so he could take our picture as I had instructed.

I stood at the top of the cliff with my daughters standing on either side of me and thought about all the things I'd never done because I was afraid. I thought about how I never wanted them to see me timid again. How I wanted to show them what it looked like when you do something that scares the living shit out of you.

And then I heard my older daughter say, "Go," and the three of us leapt off the side. We flew together through the air and plunged hard into the cold, dark water and then kicked our way back up to the surface. We bobbed in the water for a bit and languished in our bravery. Our badass-ness. Then we swam to the ladder laughing and pulling ourselves up to stretch out on our towels and bask in the hot August sun.

And much like the more allegorical jump I'd made a few months earlier, leaping into the pool of divorce, my dive off the steep marble cliff taught me to have faith in the unknown. It showed me how flying through the air, either real or metaphorical, was sometimes the only way to really live. 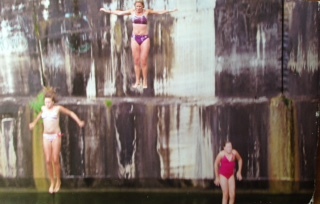 More from
'A' My Name is Amy
:
Go To Homepage